One of the nice things about walking for so long: I have no idea what day it is. I think it’s either Monday or Tuesday. Tuesday, I think. I’m pretty sure.

Had really, really nice forest trails this morning to finish out the climb to Col de la Vallée-Étroite. I got a good start early in the morning, on the trail by 7:00 AM for the first time. And it was well worth it: the morning light filtered through the trees, casting long shadows on the path. The mountains looked great in the soft, warm light—I even regret having missed such views until now. I can be an early riser yet!

I stopped just after the col for breakfast and to make some coffee—I’d finally bought some grounds at the store in Valéfrejus so that I could make my own coffee outside of refuges. They didn’t have any instant coffee that I could find, so instead I have these little round packets meant for use in a percolator. It doesn’t make the best coffee in the world, but it’s still nice to have, and the packets are better than cowboy coffee (when you don’t have a filter at all for the grounds).

From my breakfast spot at the top of the col I hiked down a loose and rocky path to cross a stream and fields, then into a sparse larch forest. A river passed along on the left but the trail went right, dropping steeply down around the side of a cliff. After a long descent the trail crossed another river at a bridge over a cascade, and I took the opportunity to have a quick wash (it’d been a few days…). The afternoon was hot and the trail had been in full sun for a while, so the cold water felt great. It’s not so bad once you go under the first time.

The trail then went easily into a small hamlet, the Granges de la Vallée Étroite, where I stopped again for a picnic lunch. The trail was very near the border with Italy, and people now greeted me with “Buongiorno!” instead of the usual “Bonjour!” I love languages, and even know a bit of Italian from a class I took for a few months in Boston, but after weeks of learning and using French I couldn’t keep anything straight. I stopped to talk with an older Italian couple resting on the trail but kept accidentally using French. I was able to say that “la mia famiglia sono di Bari” (they said they they were from Genova and Alessandria), and that “io sono andare il GR cinque.” (which isn’t right grammatically, but gets the point across). But otherwise I was a mess! It was fun.

The GR5 splits a few times in the area, with a 5B variant going over a pass in Italy and a 5C variant taking a high level route into Briançon. I’d decided to do both variants since I had time to spare; it was a bit of extra walking, sure, but how could I pass up the chance to go hiking in Italy?

I left town past the Rifugio Tre Alpini, climbing up an hour or more on dusty switchbacks through a thinning forest, up to a rounded mountain top at Col de Thures. There was a big, dry, grassy field with a dirty lake, and across the way a shepherd was marching a flock of sheep down to the water. 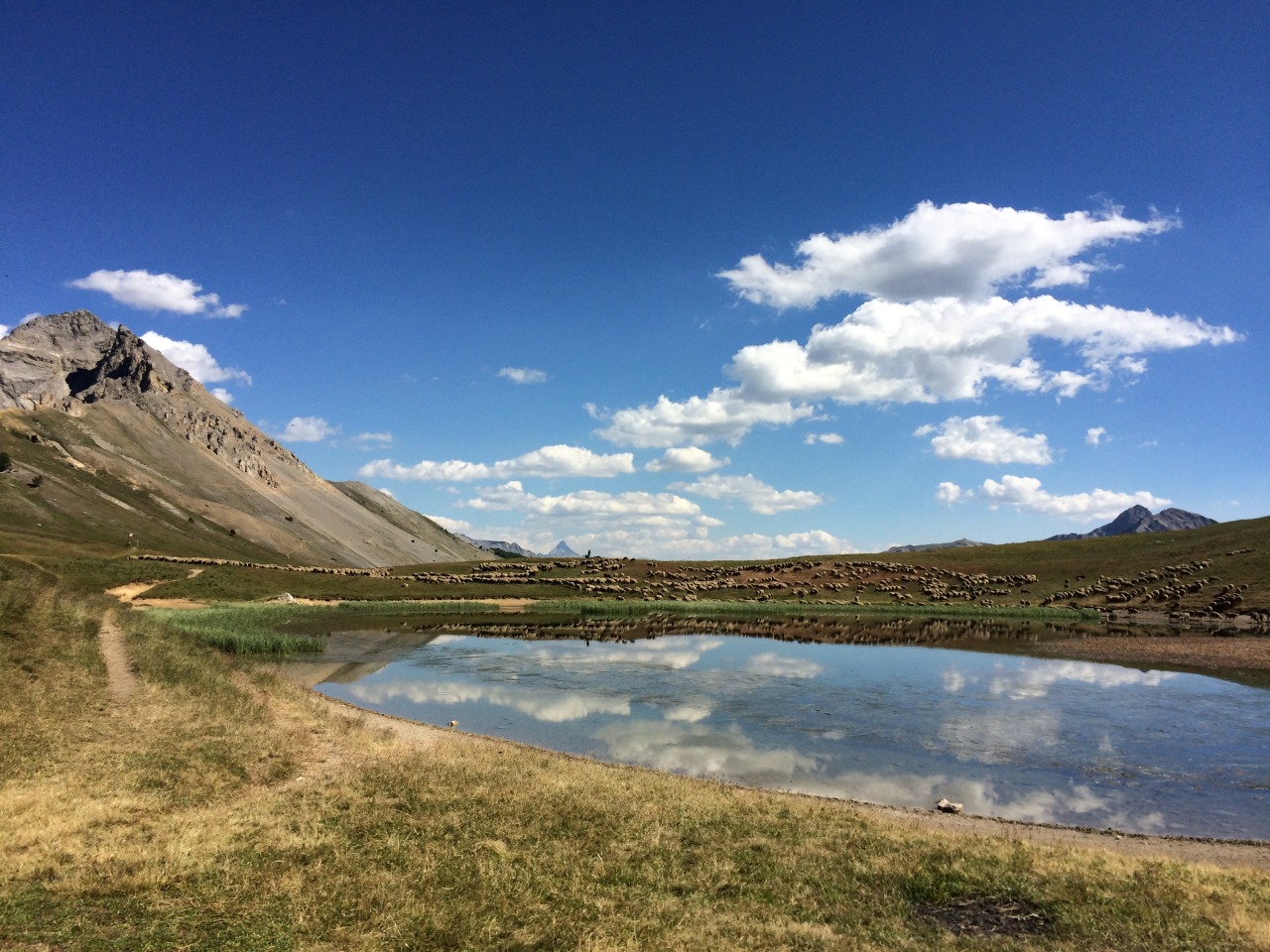 Later on I stopped at a solitary farmhouse to rest in the shade and have a drink from the fountain—it was still really hot in the sun and there were loads of flies that would swarm around you while you hiked. The clean I’d felt after washing in the river was already long gone, replaced with the familiar sweat and dirt of the trail. I waited a bit for the heat to pass, then in the early evening continued to climb a little ways more, turning off the GR5 at a junction with the 5C and heading up to another mountain pass. Another trail went off toward the high summit of L’Aiguille Rouge, some 400m above. I could just make out a big cross planted at the peak.

I stopped for the night on the other side of the pass, at a small and level grassy clearing about halfway through the descent. It was a great spot just off the path, unexpected since the descent had been over very long switchbacks on a steep, bouldery, forested mountainside. From my campsite I had a mountain-framed view into Italy, the distant peaks colored purple in the sunset. There was lots of dry wood around and I made a small fire, using the techniques I’d learned from watching Hugo weeks before. Hard to beat a night with a campfire. 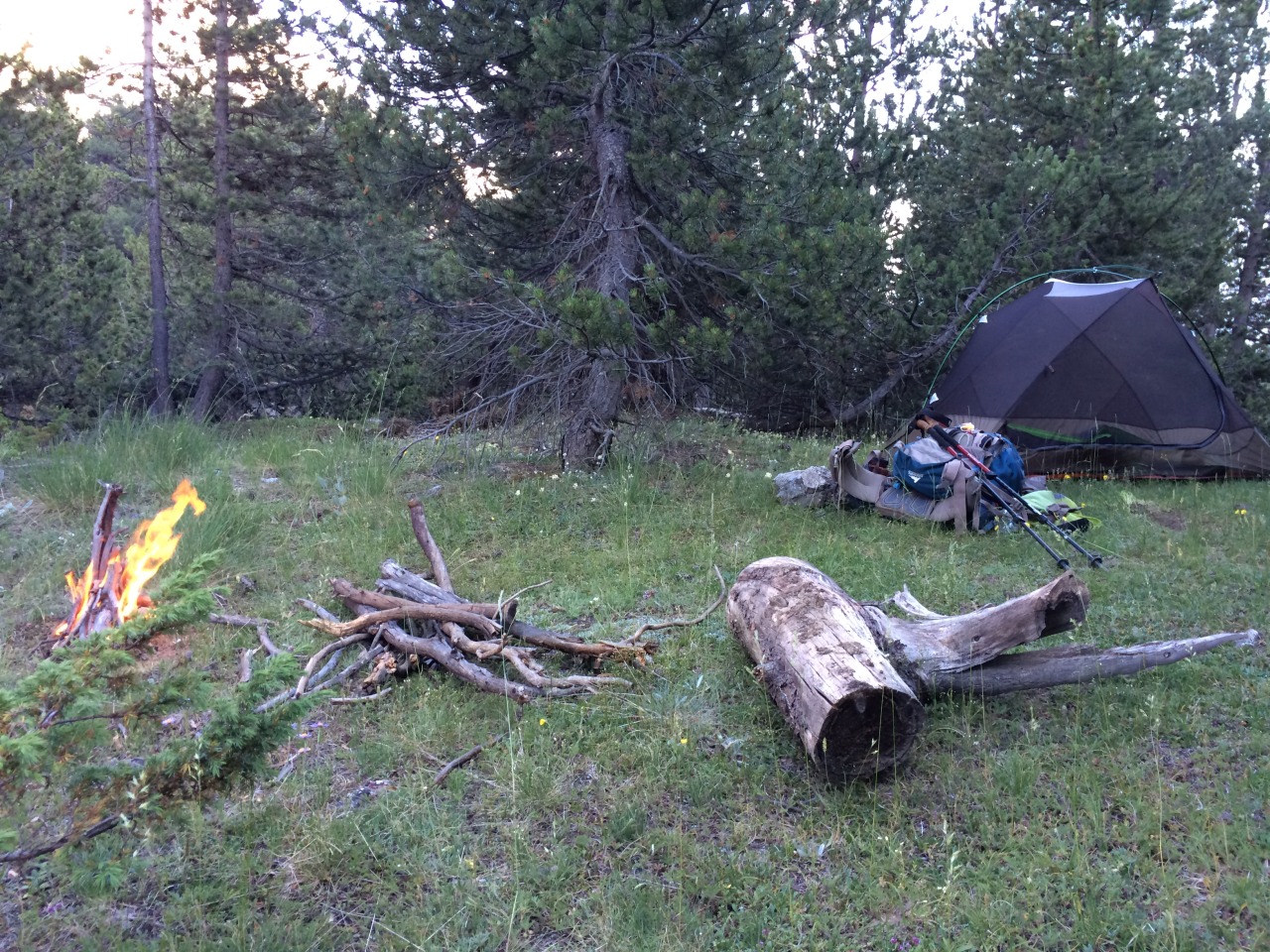 This was a great day, really. The hiking was fine, nothing so exceptional, but over good forest trails and with nice views at times. I’d finally managed to get an early start and it was absolutely worth it. I’d had coffee on top of a mountain pass, washed in a river, spoken some Italian, and made a campfire. It seemed like everything I’d learned from weeks of hiking had finally come together.

That night I slept without needing the rainfly, so I had a view from inside my tent, watching the last of the coals fade with the sunset.