First morning on the GR52! This variant stays in the mountains longer and is supposed to be a much better finish than the official GR5 route into Nice, which quickly runs into suburbs and a large city. I don’t know quite what to expect: the blogs I’ve read from other GR5 trekkers all finished at Nice. Of course the guidebook describes most things well enough.

From my campsite at Plan de la Gourra I skirted along the side of the mountain, looking over the valley back toward the small towns from yesterday’s walking. It rained for a few minutes when I reached the first col, Col de Viellos, but better weather soon returned. The mosquitos were still bad in the morning and I had skipped breakfast. I stopped to make a coffee and have some bran cereal at a nice lake just before the last bit of climbing up to Col du Barn. 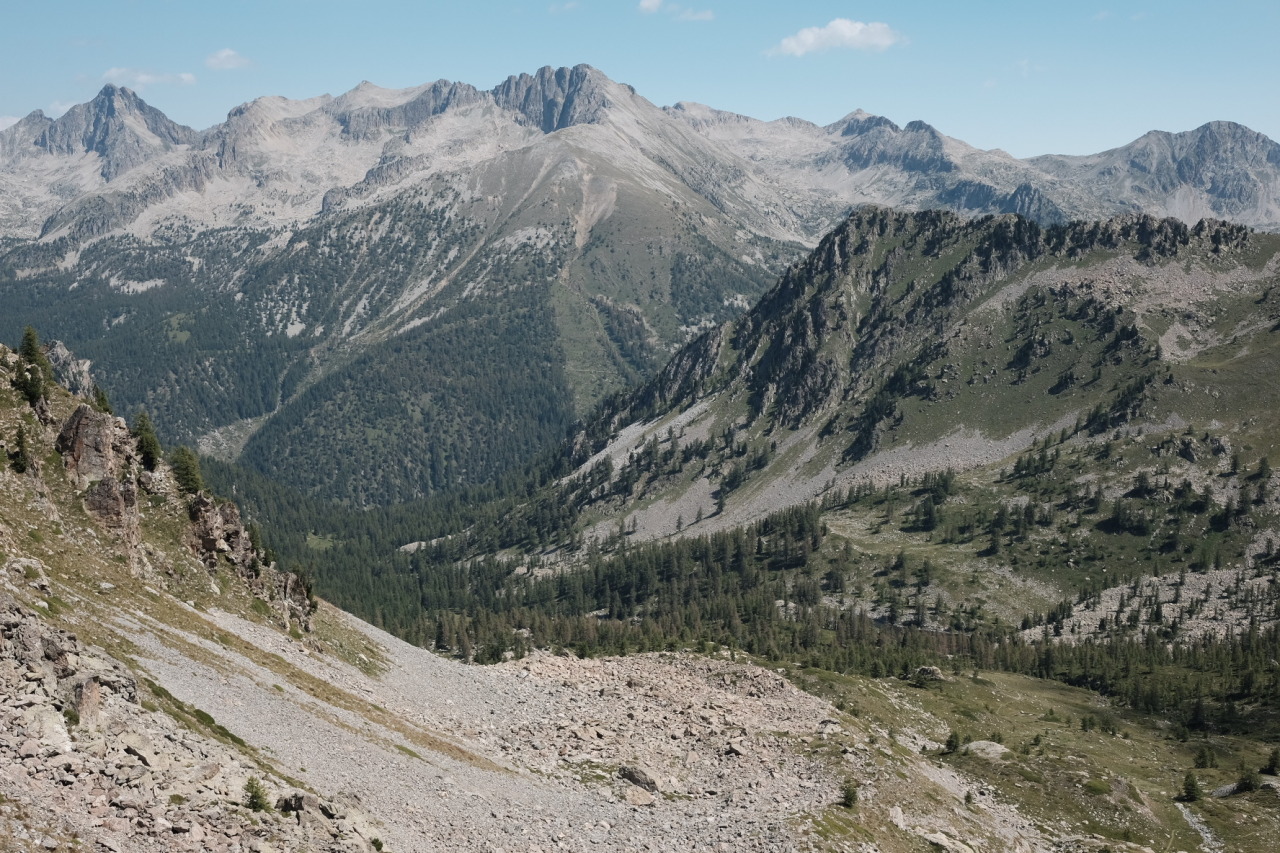 The col was rocky and there was a strong breeze, so I stopped for the view only for a minute and then continued on to make the descent. The way down was steep and winding to start (as always), but before long I was walking on a nice path past pines and alongside a few river. It was easy walking, quite relaxing really.

I stopped for lunch at a small cascade. A few hikers passed, but otherwise the trail was quiet. It was really, really nice. I only had s few hours more to walk before reaching the refuge, so I stayed beside the water for awhile. When I finally left, I passed a much bigger waterfall with a great view just a minute later. Ah well.

The way followed a few other rivers and cascades, still walking easily through a forest. At one point it turned up to a road and I missed the sign, so I ended up walking into some marshy parts and trailblazing a little. But I found the way again before too long. Later the path changed from packed dirt to chalk-like crushed white stones, cutting along a forested river basin. It was something new, even for a trail that’s walked on just about every surface imaginable. 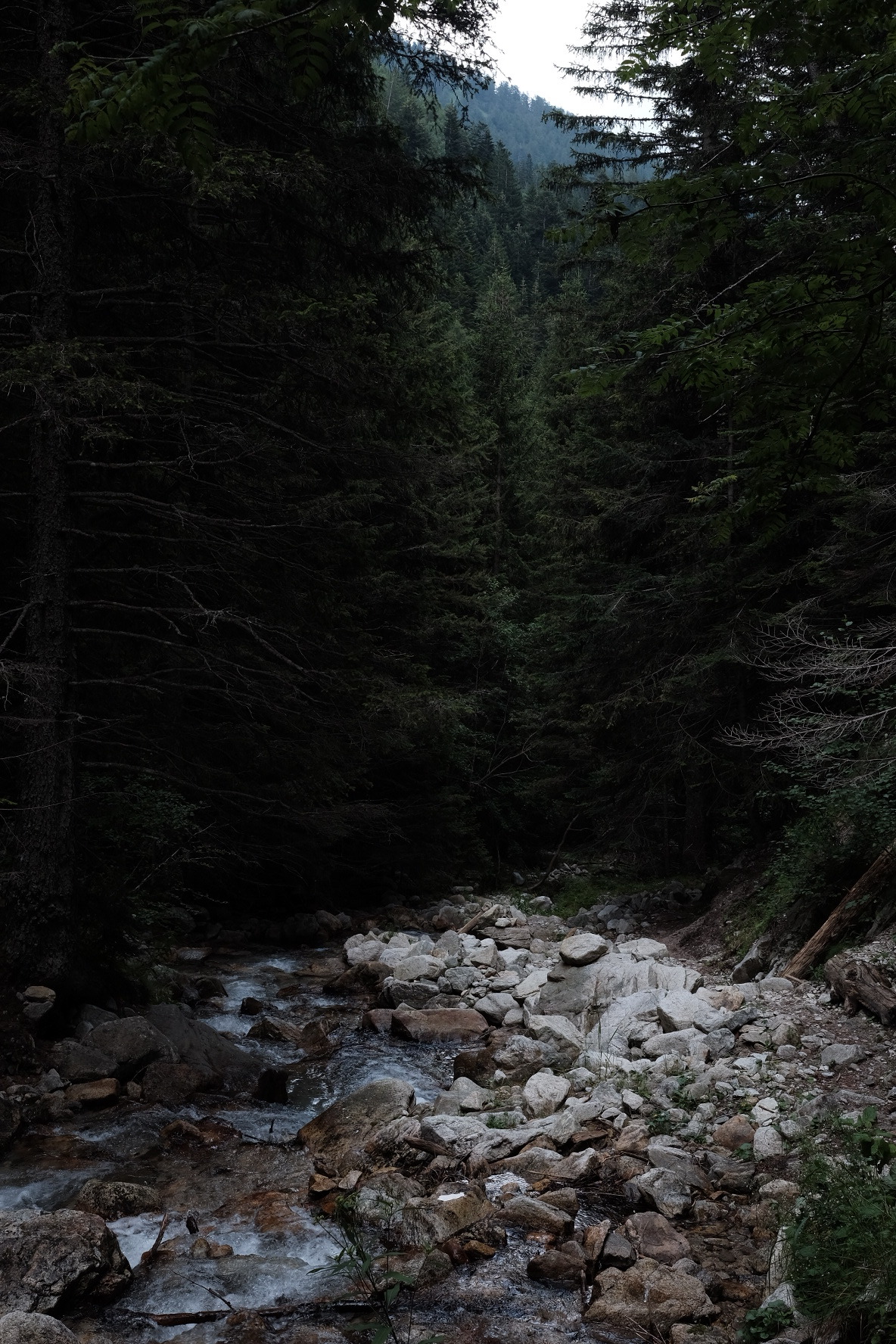 The day’s walk was easy gong, just a half climb to a col in the morning and then the rest was a gradual descent or at worst a slight climb. On trails like this, the mind wanders. I reminisced about the trails I’d walked, people I’d met, and views of seen. Walking these paths in the Mercantour felt like revisiting all the experiences that brought me here. So much happens in each day.

I reached the Refuge le Boreon in the early evening and sat down on the terrace for drink and view of the mountains around. They’re not as towering anymore. I talked for bit with a group of four female hikers about my age who’d just finished a weekend trip, answering the usual questions of “how long?”, and “always solo?”, and the like. Always fun to meet people who appreciate the outdoors. And to practice my French of course. Times like this I wonder how crazy my hair and beard looks after two months without a haircut. They were only staying for a drink though, and soon left to head home.

Dinner was served later and I was seated at a table with a Danish woman named Helle and we got along really well. She’s a documentary filmmaker with lots of interesting stories and experiences, and had a great perspective on living meaningfully that I appreciated. We talked about my trek and coming move to NYC, about her films and the company. I don’t know any Danish, but maybe German is close: Hallo Helle!

I’d planned to bivouac just a short way up from the shelter since refuges are expensive, even more so here in the Mercantour, but a storm rolled in just a dinner finished. Bright flashes of lightning lit up the sky, followed by huge thunderclaps. The rain fell in heavy sheets and I figured it would be foolish to leave. Once you’ve spent a few hours comfortably, eaten warm food and kept your things dry, it’s pretty much impossible to trade that for the thought of hiking a half hour uphill, at night, in the rain. So instead, Helle and I hid outside for a while, standing under the short eaves of the shelter and watching the rain clouds move across the mountains. I love watching storms.

We talked for awhile more afterwards, as people slowly drifted up to bed. I stayed up rather late, until finally I was the only one still awake. But no worries, a comfy bed was just upstairs.