The route through the Mercantour doesn’t pass through any towns for the first few days, but seeing as I was at the end of my trip, I wasn’t interested in carrying that much food anymore. So my plan was to eat at the refuges but still spend the nights wild camping (assuming no more storms).

The guidebook has you walk from Refuge le Boreon to Refuge du Nice, passing La Madone de Fenestre on the way. I had time to spare, so I figured I’d stop to camp somewhere between the latter two. The trick was that between them was a rocky col at Mont Colomb, so I wasn’t too sure what my options would be once I started the climb. Well, no way to know but to go for it.

The trail was easy again leaving Refuge le Boreon, contouring a ridge in the forest and crossing several footbridges over a river. Somehow there were lots of people on the trail now, so somewhere there must’ve been a junction with another, more popular trail. The new hikers were in big groups that blocked the trail and walked slow. Ugh. Took forever to get around a few groups. Trail etiquette isn’t as well known as it should be. 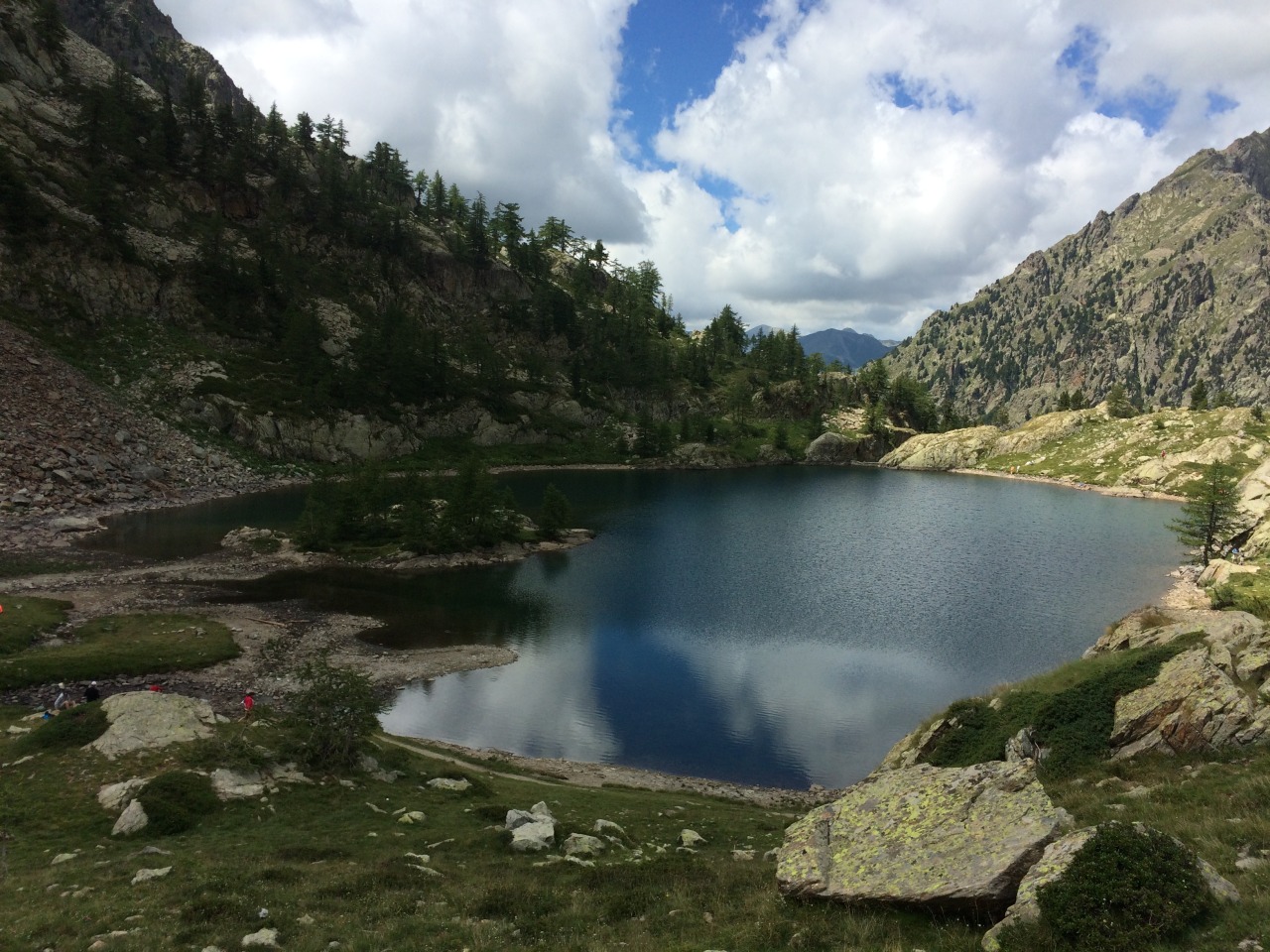 I stopped at Lac Trecolpas, a beautiful big drop of water sitting just before the Pas de Ladres. When the sun was out it was perfect, but clouds kept passing over and in the shade it was chilly. I didn’t have much for lunch, but made some coffee and ate the last pieces of a chocolate bar I had. The climb up from the lake was harder than I’d figured, and I got s bit lightheaded from not having eaten anything. I had to stop halfway up the climb and finish the last of my food, just a bit of bread and a can of tuna in olive oil. It wasn’t much, but helped settle the caffeine and sugar rush I was feeling from the coffee and chocolate bar.

Over the pass there was a good view across to the next climb at Pass du Mont Colomb. There’s a variant route that does an extra climb up to Col du Fenestre at the border with Italy, but I opted for the standard, faster route into Madone-Fenestre since I was still feeling a bit off and wanted to get something to eat. I stopped at the Refuge du Madone-Fenestre and had a healthy sized pâté sandwich that hit the spot perfectly. I ate lunch with Helle, who had arrived there well before me, having hitched a ride for Le Boreon. She had injured her ankle just before her trip and so was refuge hopping while waiting for her friends who were still hiking. Nice to meet her again.

I left the refuge in the late afternoon, taking a few scraps of bread with me and hoping to make it a couple hours up the col for camp. There was a small vacherie (cheese farm) just after the refuge, and I bought some tomme de montagne to go with the bread (emergency food, since I still planned to eat at refuges).

The path up the col was briefly grassy, then quickly became rocky and bouldery. A vast scree of heavy rocks spread across the col. Fortunately the rocks were mostly limestone which has good traction; rocks can be treacherous if they’re not the friendly kind. At one point the path climbed a massive boulder that requires a “hands on” scramble. I had to reach up and place my poles ahead/above, then use my hands for a hold and counter-pressure while making rock-climbing like moves up the rock face. It was three moves in all for the first rock, then another couple more at another boulder. Not easy with a pack on!

Something I haven’t mentioned yet: my boots are definitely showing signs of wear. They’re in pretty good shape considering the abuse I’ve put them through, but the tread is definitely worn down and there are a few gaps opening up at creases/folding points. They’re still waterproof and I’ve not had a single blister in more than 700km, so I’ve been absolutely thrilled with them.

As I got further on in the climb the day passed into evening, and when I found a rounded pass about 200m below the col I figured it best to stop. The ground was littered with rocks, but there was some grass and the rest of the climb looked more rocky and more steep. Better to stop here than press my luck climbing any more.

I made my last packet of soup with a few of the scraps of bread and watched some weather pass through the valley, looking back toward the few buildings and church that made up the refuge Madone-Fenestre. A beautiful sight from what I figured would be one of my last mountain camps. There would only be one more col above 2500m, then just foothills on the way toward Menton and the Mediterranean.

I sat for a while, thinking about how soon I’d be reaching the end and getting caught up in my own thoughts. A thick white fog rolled in late and I closed the rainfly from inside my tent. My phone picked up signal from somewhere and I was able to send a few messages home before going to bed. I didn’t even feel the rocks under my tent. When I woke in the middle of the night the stars were as clear and bright as I’d ever seen them.