This is my seventh week on the trail, and the final few days of the trek. After so long a ways, I’m certainly ready to be done. Especially because the trails here are a bit less interesting without the dramatic mountains of before, and it feels a bit like I just have to get through these parts compared to the excitement of some of the earlier hikes. At the same time, I know I’ll miss being out in the mountains like I have been these many weeks. And New York is going to be a huge change.

Yves and I went to the bakery for breakfast early in the morning, each having a small coffee and a brioche raisin (a spiral croissant with egg and raisins). I had a Niçoise dessert as well, a powdered sugar and nutmeg spiced square that was pretty good. The French have food pretty well figured out.

Yves went ahead, then I left a little while later. Walked steadily and easily over wide paths and roads all day, always climbing. Hot again, and by now I was dunking my head in every fountain I passed. You can’t believe how good it feels.

I caught up with Yves again a few hours later in the afternoon at a restaurant in St. Dalmas. It’s just a small town, but it serves as the forking point between the GR5 and the GR52 (and a few other trails), so there were quite a few hikers and cyclists passing through. Yves and I chatted for a bit, then he left to finish his final few days while I stayed behind in town for lunch. I had a small picnic in the courtyard of an old Roman church and set up my clothesline to dry a few things that had gotten wet from the night’s humidity. Inside the church there was an old crypt that had glass panels in the floor so that you could see down into the graves, skeletons and artifacts laying there underneath the rows of chairs. After eating, I sat outside for a long while—too long, actually, so that I eventually lost my motivation to leave town. It took a lot of mental effort to pack things up again, and pull the pack back on. 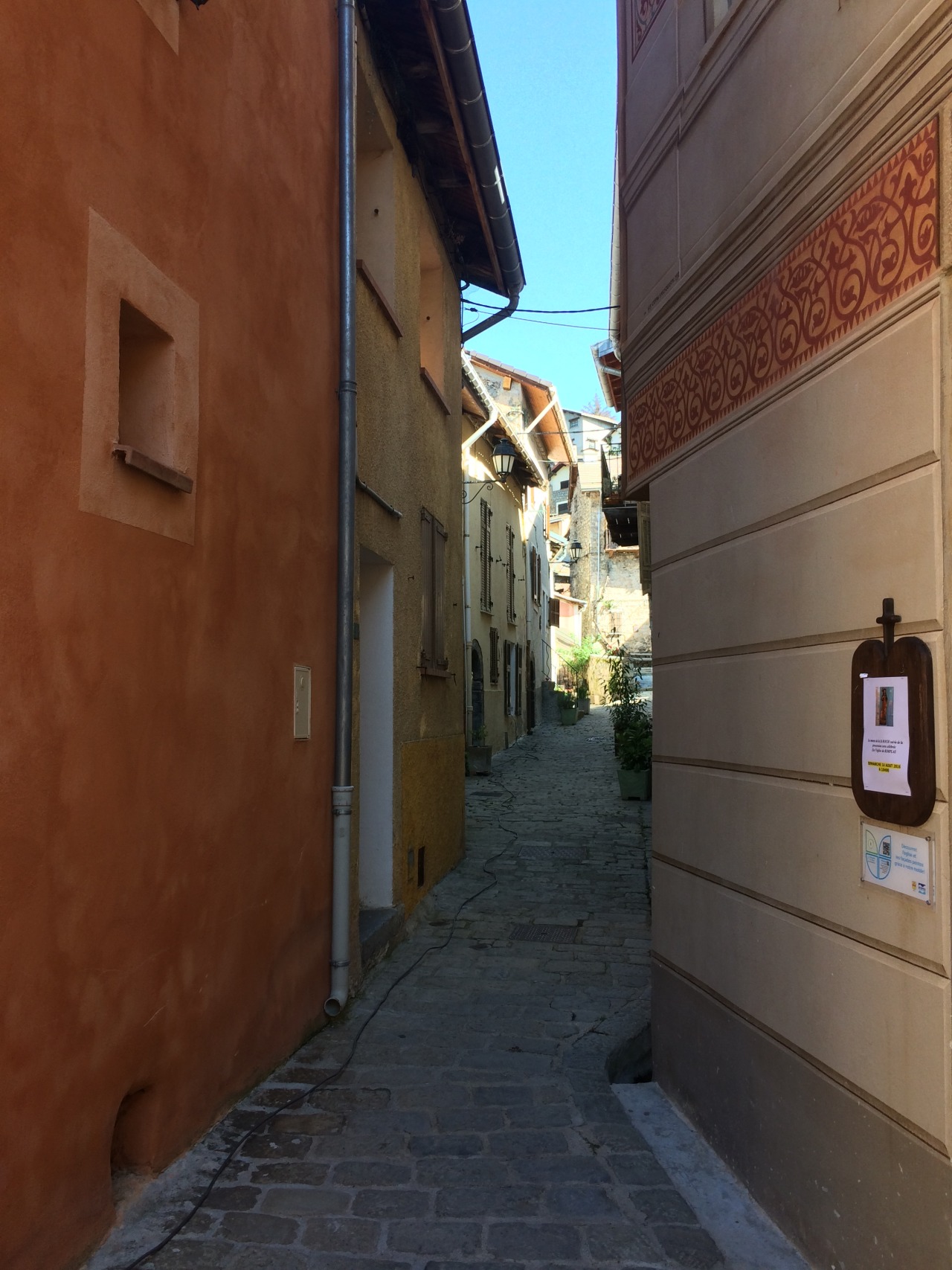 I walked to the store to get a few last things since the 52 doesn’t pass through any towns for several days. Just by the entrance I ran into Mika, the Finnish hiker I’d met a week or so earlier on the trail. He was planning to take a few rest days at the campsite in town. I was happy enough to have an excuse to not hike, so we sat and had beer while he waited for the one restaurant to open for a pizza.

About 6:30PM I figured I’d better get going. If I stayed for dinner it would be too dark to go any further, and I didn’t want to spend the night in town. So Mika and I shook hands, and then I left the GR5 for the last time, turning onto the GR52 toward Menton. Well, toward the north and Lake Geneva actually: the GR52 makes a big arc back up through the Mercantour before landing down at the sea.

I hiked a couple hours out of town, making my way through a small but pleasant bit of forest and halfway up to the next col, setting up camp in an open grassy field a little after 8PM. First solo camp in a few days, and I enjoyed the solitude again. Though some mosquitos kept me from enjoying it too much. Burned my soup.

I watched the stars for awhile through the screen of my tent. Only four days left.