Mika and I both woke up early, just before sunrise. It’s a good feeling to wake up so early in the morning. Somehow I wake up earlier and stay up later when I’m traveling compared to my schedule at home. Don’t want to miss anything, I suppose.

The big mountains were behind us now, and though there were still a few climbs left before we would reach the sea, the cols would be much smaller and more gradual. We had a coffee and some muesli, then made quick work of a climb up to Pas du Diable, leaving the Vallée du Merveilles. Looking south from the col, the sky sure looked awfully blue. 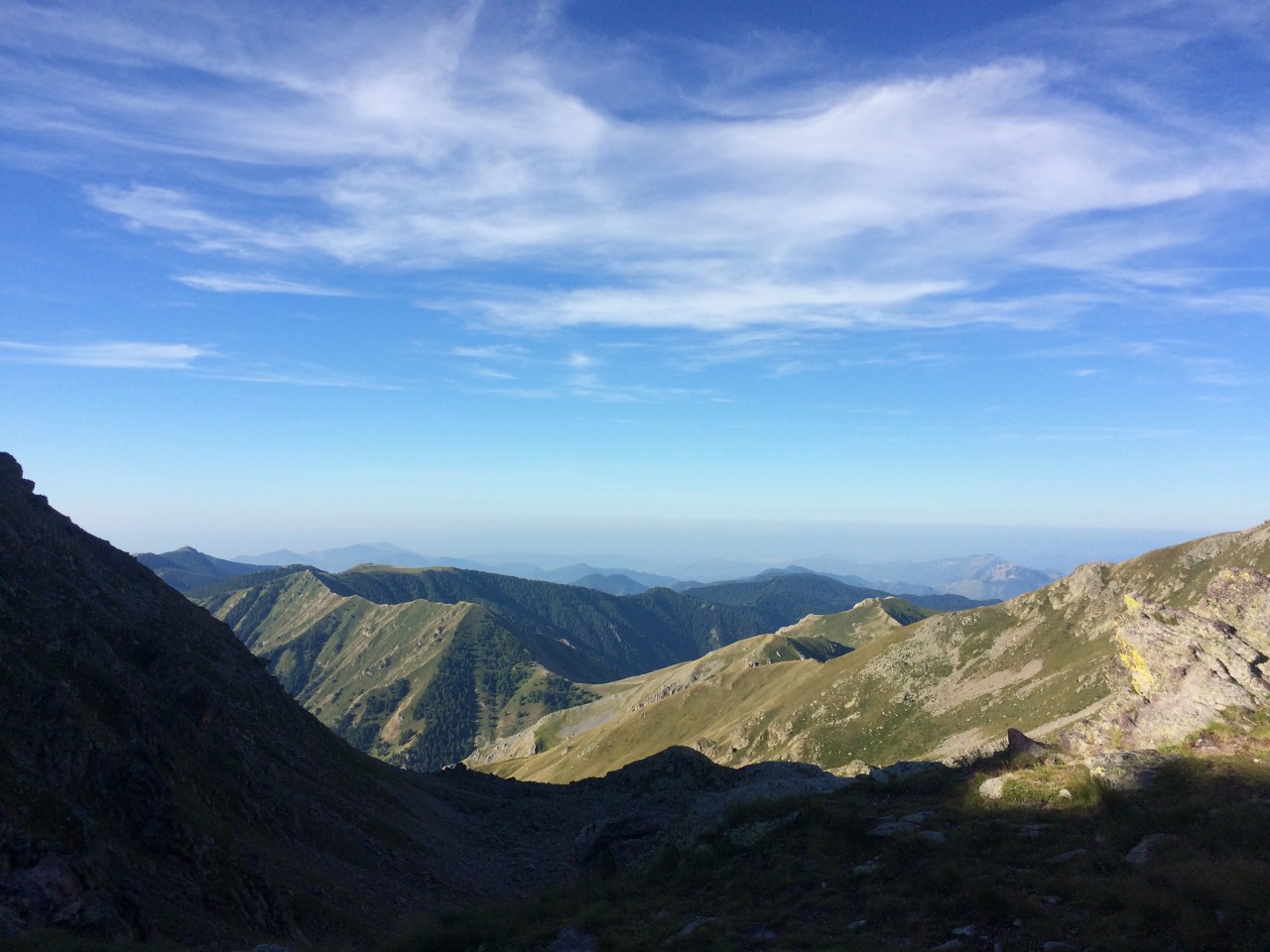 The descent from Pas du Diable was tough, but at least I could use my poles again outside the valley. We walked on through the afternoon, crossing military bunkers and grassy fields on mostly level tracks. At a narrow ridge, we had to wait for a flock of sheep to pass. It was a steep drop to the side and we didn’t want to spook the sheep and have them fall so we had to be patient. The guard dogs watched us closely, then let us through. Incredible, those dogs.

Stopped at Camp d’Argent for lunch. It was hot so I tried to open the patio umbrella beside our table–must’ve turned the crank a bit too far though, because the rope snapped and the umbrella collapsed. Thankfully, the owner said it was no problem to repair it. Could’ve been a costly accident. The food was good anyway: I had an assiette du berger, some bread, a few cuts of jambon cru (like prosciutto), pâté, a small salad, and fromage du chevre.

We’d originally planned to stop just past Camp d’Argent, but the walking was so light that we’d made it to the restaurant before noon. It was another four or five hours to Sospel, making for a nearly ten hour day, but we decided to go for it. When you’re this close to the finish, it’s hard to sit on your hands. Anyway, the way into Sospel followed a mountain ridge so finding camping would’ve been difficult.

The path criss-crossed the ridge, passing from one side to the other a few times. On the east side it was covered in a thick cloud, and if I stopped for a minute Mika would disappear into the fog ahead of me. The cloud abruptly stopped right at the ridge, so on the west facing side was clear and hot. Beautiful and strange. 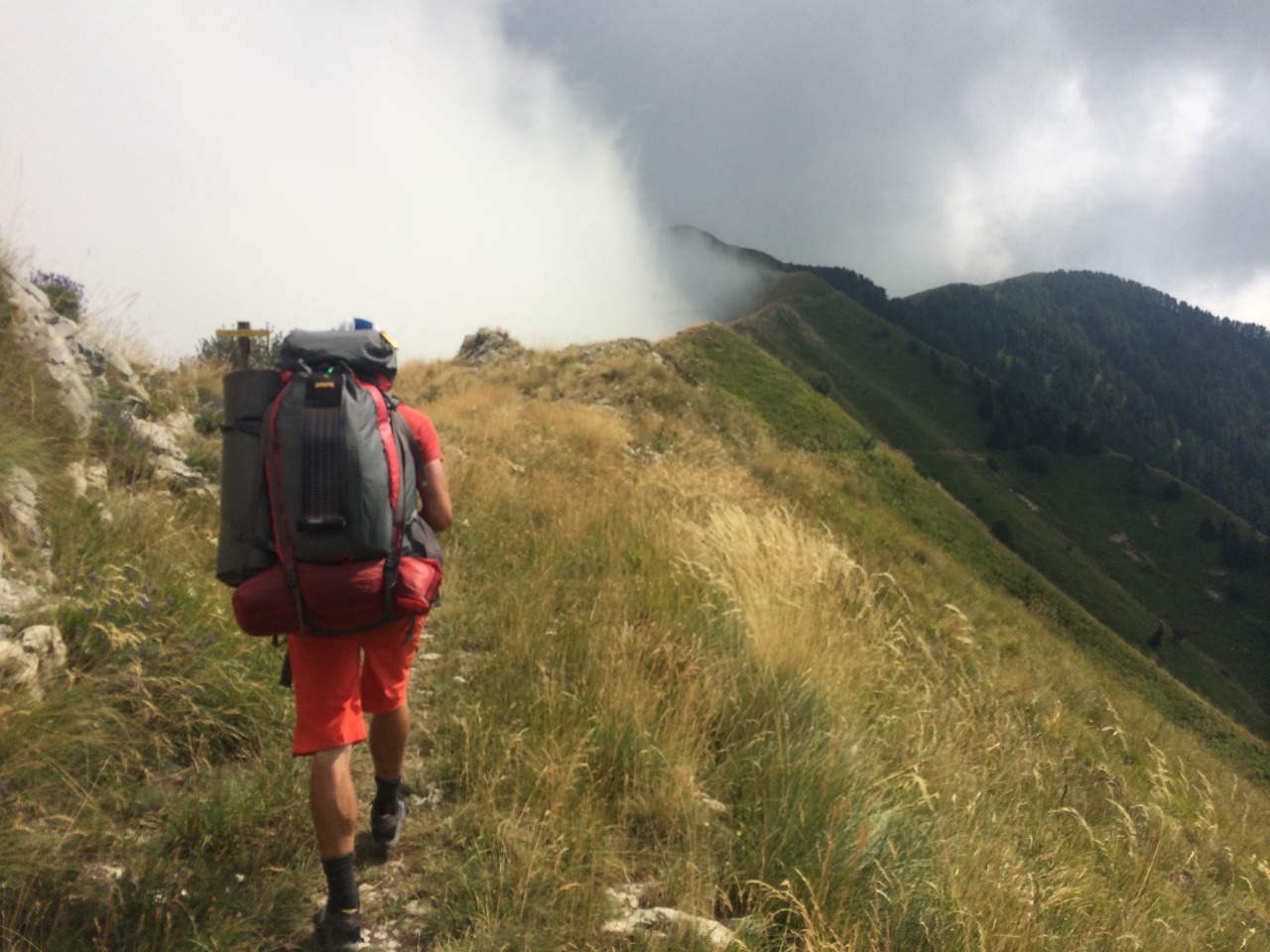 After passing several cols along the ridge, the trail descended very steeply into Sospel. The town was more than 1000m down, and the way down took more than two hours. The landscape changed several times on the descent, turning from green and yellow grasses to dry pines, then to more desert like shrubs and brush. As the path changed from dirt to dust, you really felt closer than ever to the Mediterranean.

We reached town in time for dinner and stopped in at a small restaurant. It was a smaller village than I thought, just one main road and a dozen or so shops. But it’s a very old town, being an important stop on the”rue du sel” (salt route) from centuries past. Colorful but crumbling and dirty; derelict old homes banked alongside the river, which was shallow and dry. Behind the main road there was an open plaza and a large church, empty and quiet. After our dinner we had a coffee in the main plaza, watching people and vehicles pass by the busy little street. The day had been the longest ever, some 40km (~30mi), but it was worth it to be able to rest at a nice cafe bistro after a good dinner.

There was camping in town, but I’d read online that it was 15€, far too expensive for a campground in my opinion. Mika didn’t care either way. We checked the map and found a spot that looked promising, so after a second coffee and a little more relaxing, we finally left town at dark. A poor choice.

It was a farther walk out of town than we’d guessed, and when we reached the spot we found that it wasn’t nearly as level as the map had made it out to be. We searched around in the dark for more than an hour and the best place we found was a large, ugly, gravel lot, overgrown with weeds and thick grasses all around, plus a few piles of rocks and trash at the corners. A train passed by a few times overnight, horn blasting and wheels screeching on the tracks. Somewhere up the mountainside, a dozen or more dogs barked nonstop. It was ridiculous; a cacophony that carried on all through the night.

It was the worst camp site I’ve ever had, and I’ve had a lot. The absolute worst.