Great weather overnight, clear skies and cool temperatures. Perfect for camping in the open like I was. I woke up early again, just after sunrise, and again it was worth it. The sunlight is just so much softer, warmer at the start and end of the day; it really makes the landscape look that much nicer.

I finished the descent to Col de l’Échelle, a mountain pass that was actually in a valley, walking down more zigzags and out of the forest. The path crossed a road and followed an easy, grassy trail parallel to the road for a long ways, snaking side to side past a few trees. At a bend in the road the trail turned sharply and started another climb up the mountain. I made my way up rocky switchbacks, in one direction facing directly into the sun so that I had to walk with my hat pulled down over my eyes. It was hard climbing. I was right on the border and between the trees there were passing views into Italy, to the town of Bardoneccia and the surrounding mountains. 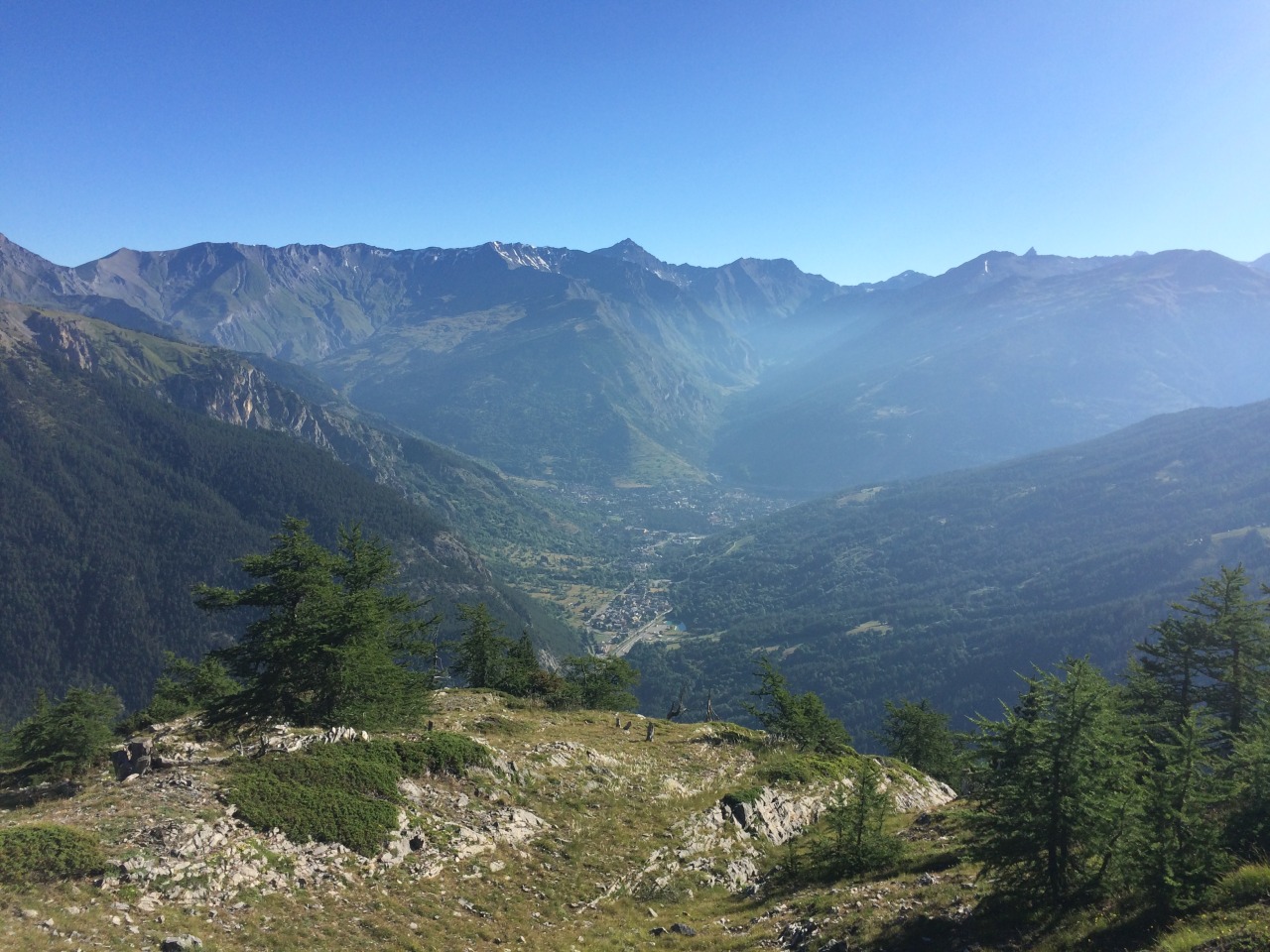 I kept on, climbing some 500m, waiting to see the short, white, concrete bornes that delineated the frontier. The trail passed around lots of derelict defensive buildings, bunkers and barracks from the war, just big blocks of concrete. Finally I spotted the border markers and stepped into Italy—the rugged landscape didn’t change much, of course, but at least nominally I was in a different country! The trail dropped down across a large, bowl shaped basin at Comba della Gorgio, full of rocks and scree. Some parts of the trail seemed to be crumbling away with the mountain. Climbing out of the basin and to the other side, I passed among another forest and more military derelicts to reach the Col de Pertusa, back in France after a few short hours abroad. I stopped for a late lunch under some ruins, the Chalets des Acles.

The 5B descends over gravel roads into Palimpnet to connect with the GR5 again, but I was headed to the 5C in Névache, so made the long walk between towns, figuring out my own route at times since I was walking the trail backwards. It wasn’t so nice a route, in the end, mostly because it went on longer than I’d anticipated. Though there was a nice river that I was tempted to jump in. After passing several small towns with no services, I finally stopped in Névache (which is actually a name shared by several of the towns, confusingly) hoping to find someplace for lunch, but the few restaurants had all closed their kitchens for the afternoon. So I just bought some bread at the boulangerie and made a tuna sandwich, passing the afternoon in town before starting off for the 5C in the late afternoon. 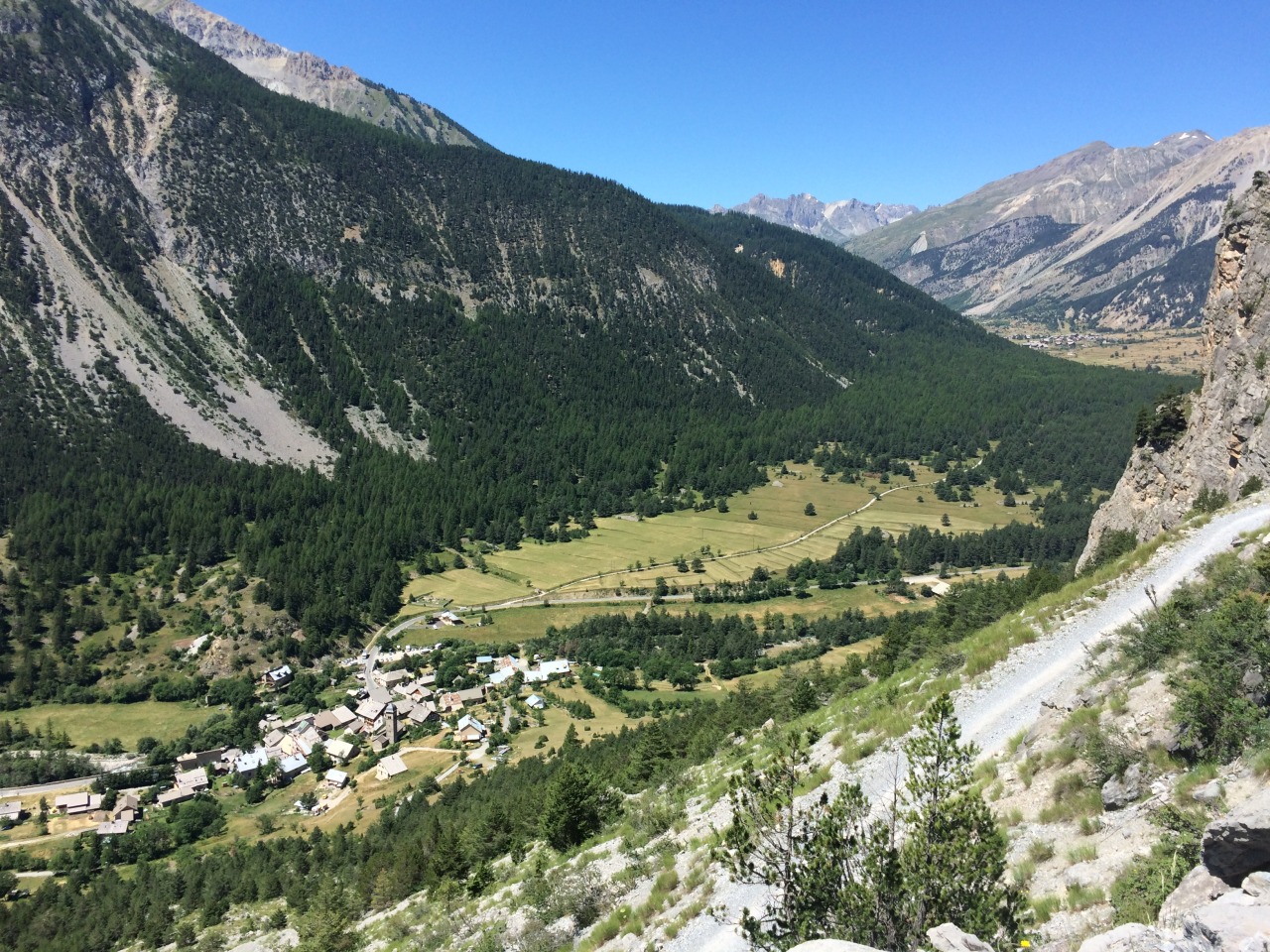 As a high level route, the 5C spends as much time as possible up in the mountains. But Névache was down in the valley, so I had to make a big climb to get started on the route. It was the second big climb of the day, and even harder, up some 1000m of very steep climbing on rocky paths in a dense forest. The guidebook figured it was 2 hours to reach Lac de Cristol, which turned out to be just about right. I basically just powered through the climb, not really stopping since the trees blocked any views. The bugs were terrible.

Lac Cristol was dark and moody, reflecting some clouds that had rolled in. Hoping for a better spot, I went around the first lake and camped at Lac Rond du Cristol, just a little bit higher up. It wasn’t a better spot, but it was at least more sheltered, since there was a lot of wind and the lower lake. Neither of the two lakes had many options for camping: the ground was wet and marshy all around, then all full of rocks if you went much past the lakeside. It wasn’t much of a reward for such a hard climb, such a long day. That’s how it goes sometimes. I made a soup and had some bread, cooking inside my tent to escape the flies and mosquitos. It rained a bit overnight.

The pass through Italy had been more rugged than beautiful, and was too brief to feel any different from the rest of the day. I’ll have to do a proper trek in Italy some day…