After a good breakfast (coffee, crème fraîche, muesli), I left the pleasant little town of St. Étienne du Tinée behind, walking again with Patrice and Dominique.

The day started with a massive climb out of the valley, 600m straight up to the ski-resort town of Auron. It was miserable climbing, no views and endless, steep zigzags. Even after weeks of hiking in the Alps, this was a tough climb. Can’t imagine doing it in the heat of the day. In town I went to the store to resupply and walked out with plenty of food, and a few ice cream bars for a treat. 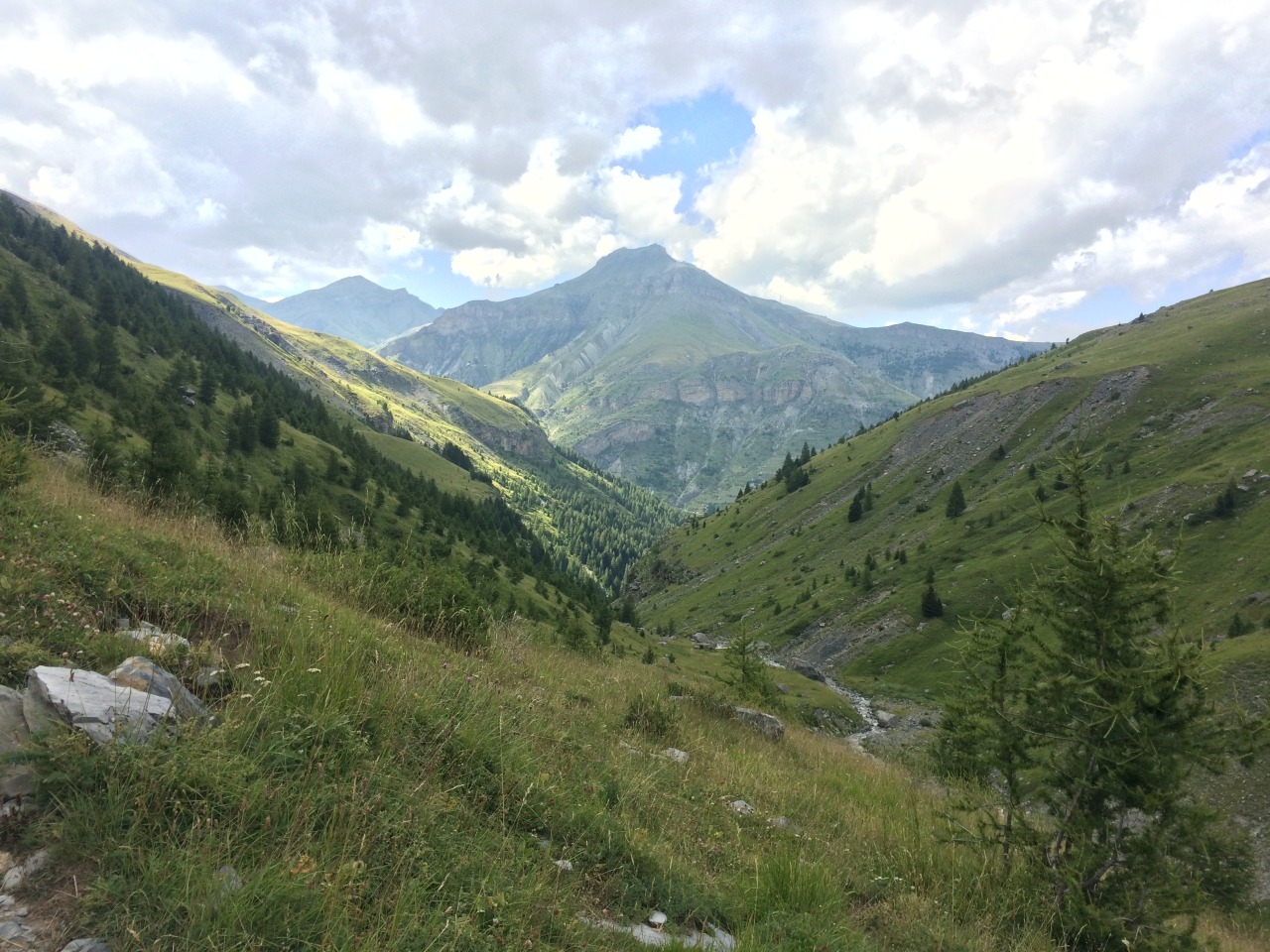 Patrice and Dominique went ahead on the trail and I walked alone to meet them at Roya, climbing over a few mountain bike paths out of Auron and then passing through more open fields. There were lots of old stone farmhouses, some falling apart entirely. In Roya we shared a very refreshing beer together, then they went on ahead again while I stayed behind to figure out how to spend the final days of the trip: Dominique had given me some suggestions about Bretagne and the Côte d’Azur. I stayed in Roya a couple hours more, having a second beer and generally taking it easy.

The trail leaving Roya was really nice, a good climb through forest alongside a river, then crossing a footbridge over the water to the other side where it was more grassy and bouldery. Good views back toward the few buildings that made up the town. One part of the trail was very rocky, and box-like boulders with sharp corners sometimes jabbed at your feet. But the real trouble was that there wasn’t a water source for a long ways, so I had to carry a bit more than usual. Water is heavy. But it was good hiking.

I made my way toward Col du Crousette, but I’d left Roya too late to make it all the way past the col to where there would be a place to camp. Near the last stretch of the climb I passed a French woman going the other direction and she recognized me as “the American boy.” Patrice and Dominique must’ve said something; they were probably well past the col by now. Speaking quickly in French, she said there was a tiny water source ahead and then a spot to camp just before the col, where there was another guy. She said a bunch of other things as well but apparently didn’t notice that it was all way too fast for me to comprehend. I nodded and smiled, catching one word out of every dozen. Anyway, I’d already planned to camp just ahead. I found the water source (not much more than I trickle!) and soon saw the tent of the “garçon” she’d mentioned.

I figured I’d ask if the guy wanted to camp together for the night, and so I met Vincent, a French hiker from Nice who had just started his trek. I made a big pot of pasta with red pesto sauce for the two of us, abruptly deciding that I’d been carrying it too long and that the best thing to do was to make it all right then. Vincent made some tea and shared some spice bread, and we had a good time figuring out one another’s broken English and French. (Ironically, he works at a school that teaches French to exchange students). Salut Vincent!

After we’d already set up our tents, a shepherd and his flock came across the mountainside and slowly made their way down into the grassy area we’d set ourselves up in. For a while we were surrounded by a bunch of sheep and goats, and all you could hear was their bells and baaing, goats munching on grass and sheep stumbling into one another. We weren’t sure if we’d have to move or what—that depended largely on the whim of the shepherd. At least four dogs came by us as well, guiding the troupe and checking that we weren’t any danger.

Eventually all the animals passed us, the shepherd waved at Vincent and then penned the flock up by his cabin about 500m on. One of the bigger dogs stayed behind, lounging between our tents and keeping an eye on us I suppose. 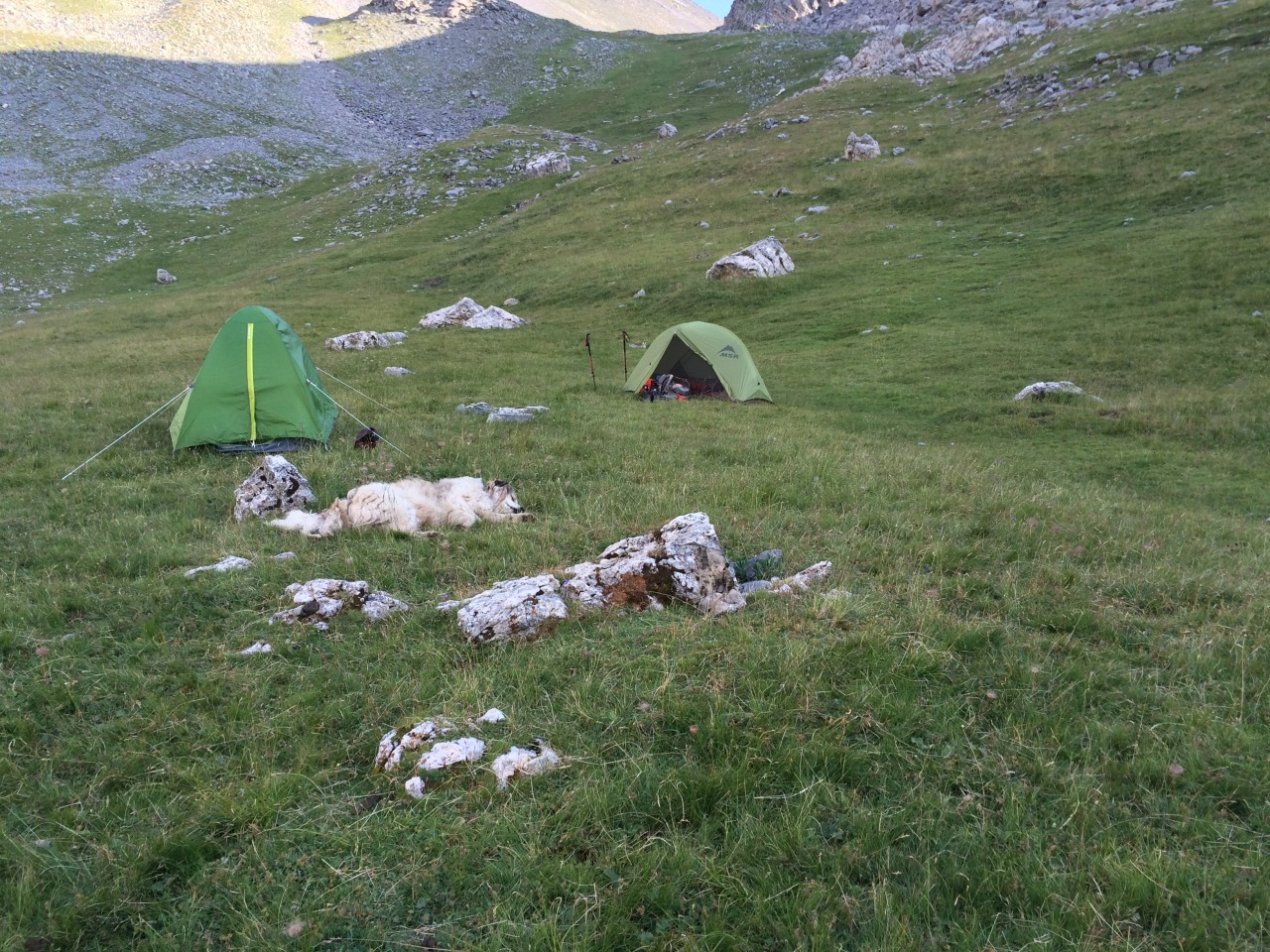 I no longer dream of being a shepherd.