Mika and I both woke up before 5AM, both ready to get away from that horrible campsite. Woke up is generous, seeing as neither of us had been able to sleep for all the noise. We walked back into town and stopped in at a bakery to buy some things for breakfast: coffee, a piece of quiche, and a pain au raisin. Now, at least, we could laugh at how ridiculous the night had been.

It’s only a seven hour walk from Sospel to Menton, but we figured it’d be nicer to finish at the sea after a short walk in the morning, rather than in the evening after a long walk. So we planned to wait out the afternoon heat in Sospel and leave in the evening, walking most of the way but saving the last few hours to Menton for tomorrow morning.

We sat at the same cafe as the night before and had a few more coffees throughout the afternoon. We met an English man named Peter who was traveling the south of France by car with his dog. Nice guy; I think we convinced him to try trekking for his next trip. It’s interesting to meet such people, share a meal or a drink, but with the knowledge that you’ll never see them again. Sure, there’s Facebook and email and the rest. But actually it’s nice, sometimes, to just meet the person and not get all that contact information. Just let the moment be all, and keep the memory.

Peter left for Italy (easy enough when you have a car!), and Mika and I passed the heat of the afternoon in the shade of a tree, trying to catch up on sleep. A cicada buzzed loudly from somewhere just above us, and I laughed to myself: my memory of Sospel will forever be of terrible sleeping.

We left town about 4:30PM, though the heat hadn’t really passed. Sospel sits at just under 400m, Menton at sea level. Between was the final col, a 1200m climb and descent. There was only one water source mentioned, so we filled up a bit extra and set off. It was several hours climbing, very hot and humid. Our shirts and faces dripped with sweat. It was so, so humid.

We passed the first col, Col du Razet, and made our way to the second, Colla Bassa. Along the way, at a corner, a view opened up and we had our first unquestionable view of the sea. Eight weeks of walking, through forests, over mountains, beside rivers, across fields, and now here at last was the sea. The end. 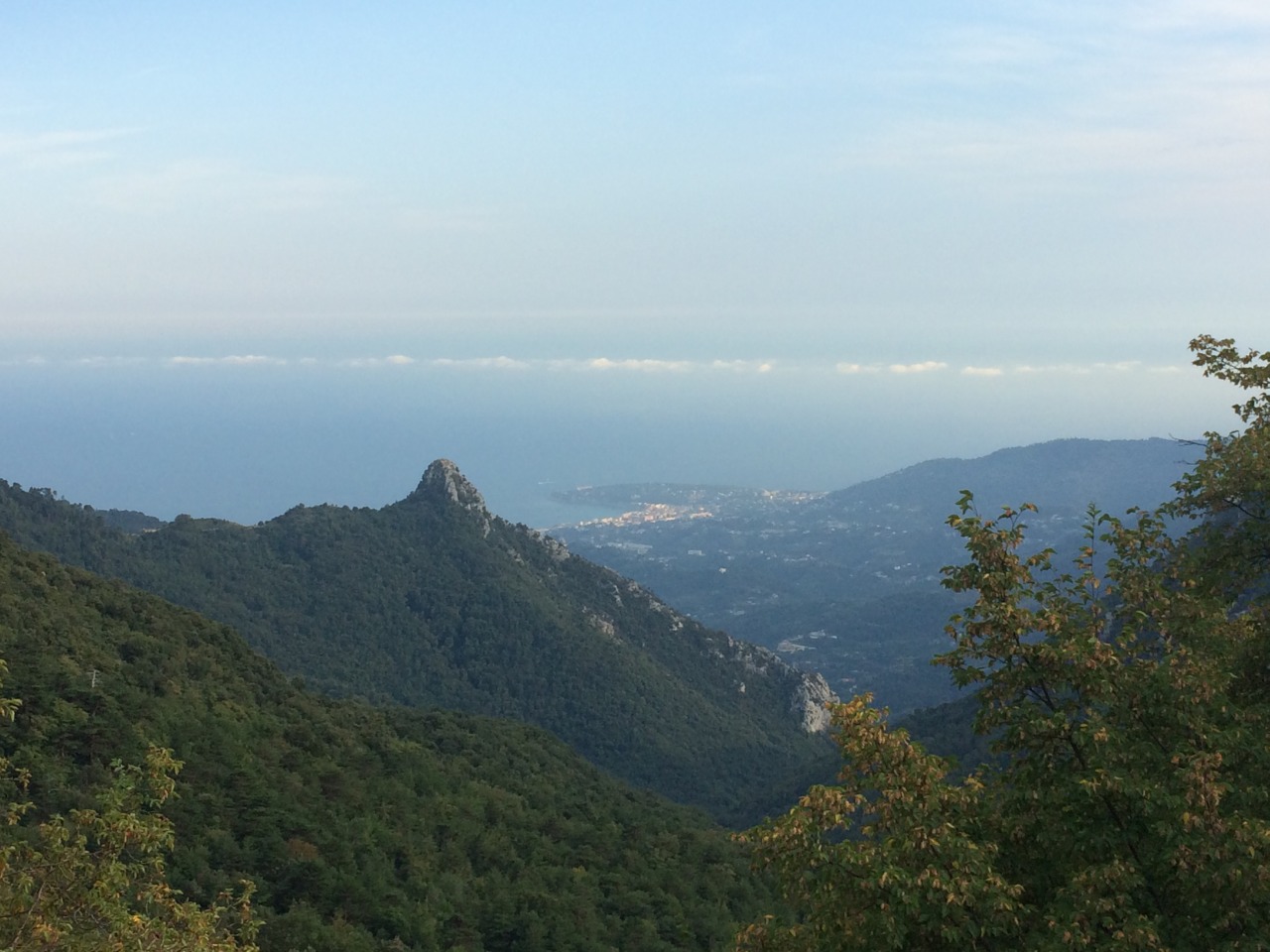 Well, not the end just yet.

We walked another hour more, the trail falling away steeply at the side or giving way to dense forest. At a junction with another trail, there was some flat ground and we stopped, thinking it might be the only place to camp before town. It was late, past 8PM, so going any further would mean possibly walking past dark. But I wasn’t satisfied with the spot, not for the last campsite of the trip. No way. I wanted a view of the sea. Here it was packed in with trees; dark, and stuffy. I knew I had to find something better, even if there was no reason to believe there would be something better. After the previous night’s disaster of a campsite, it was risky. My mind was made up though.

Sometimes, things work out in ways you never could’ve anticipated. We walked another quarter of an hour, down to Morga before the final col ahead of Menton. We were kicking ourselves for not buying a beer in town to have with our last dinner–the thought had been on both of our minds, but neither of us had mentioned it in the market. I was psychoanalyzing myself, asking why I was never satisfied and we I always had to know what was around the corner.

Well, just this once, around the corner was shangri-la.

From the side of the trail we saw a house, and I thought maybe we would be able to buy a few beers from them. A woman, Christine, was watering the garden. When she saw us she told us to come in, saying that we could stay the night there if we wanted. I didn’t know what to say. There were several more garden terraces and a small house with a view to the sea. The lights of Menton glowed along the coast and boats shimmered on the water. It was absolutely beautiful. They were just about to have dinner and she insisted that we join; everything was fresh from the garden. For dessert, she brought out fresh honeycombs from the hives she kept. It was better than any honey I’ve ever tasted.

The place was unbelievable. There were a few other folks there, and we stayed up late, drinking chai at the table and talking. This was totally unexpected, and more than I could’ve ever hoped for. The final night on the trail, and one of the best.