The weather here sure changes often. Apparently the combination of altitude, mountains, and proximity to the Mediterranean makes for complex weather patterns and difficult forecasting. In the morning, it was quite cool and breezy. Then the sun rose and made for a hot and humid afternoon. For the late afternoon and evening, rainstorms and sun fought each other for position, retreating and advancing, flanking from side to side, then the clouds finally passed over late at night. Meanwhile, the trail improved throughout the day, passing roads to start then lakes and mountains later on.

I met a French couple early on at the Col du Mallamorte and walked with them for the rest of the day. Patrice and Dominique are both 60 years old and were hiking the GR5 from St. Gingolph at Lake Geneva. And they’re faster than me, if you can believe it. I could barely keep up with them on the descent into Larche—I’m faster on climbs though (barely), so at least I have that. 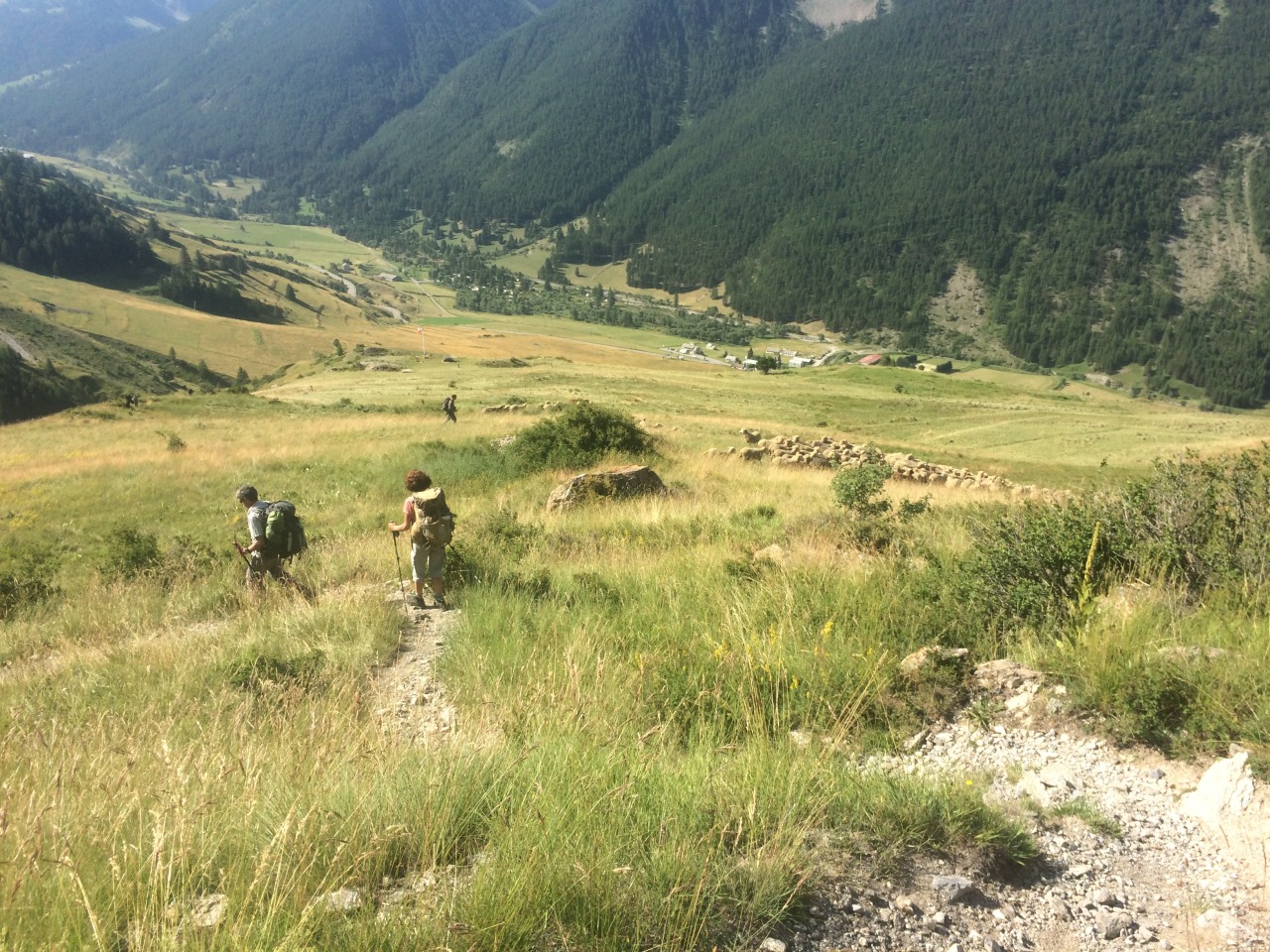 The trail down to Larche was long and sometimes steep, and very hot. After more than an hour in the sun, we stopped for a beer at the gîte in town, though it wasn’t even noon yet and we’d only walked some two hours. The local brew is La Sauvage, a strong wheat beer, and the three of us rested in the shade for a bit after the drink. Snacked on some chocolate as well, which was good.

Patrice knew a back way to return to the GR5 and it was one of the better trails of the day, easygoing along a river. When we connected back with the main route it followed a paved country road for a long ways, finishing at a car park. At least it was stil beside the river, L’Ubayette Torrent. The road walking was quite boring and kept on at a low, steady climb for what seemed like a very long time.

Later on we stopped for lunch beside the river at a grassy spot in the center of a large valley. The weather was nice, sunny but not so hot, and Patrice and I each went for a quick swim in the river. I washed some of my clothes as well, hanging them on the line set up between my poles. Ate some cheese (tomme and mimolette), a piece of dark bread, a tomato, apricot, and a few cuts of sausage for lunch. Farther on ahead we could see rain and dark clouds hanging above the mountains in the distance.

We followed a busy trail up to Lac Laussanier, a beautiful lake that had plenty of great spots to camp if only it were later in the day. The water was dark blue and unsettled, reflecting the storm brewing above.

We walked on, climbing again, up past a peak to another lake (actually a group of several small lakes and one main one), Lac Derrière de la Croix. And now the storm was coming on, with lightning flashing ahead, thunder shaking above, and rain falling harder down. There were no trees or shelter to hide under, so the only thing to do was walk forward, eventually reaching a place where we were at least protected from the wind.

There we stayed, debating whether or not to set up our tents in the rain, or to wait out the storm and keep walking. It was still more than four hours to Bouseiyas, which would make for a late night. After some twenty minutes the storm seemed to be moving on, and we decided to move on ourselves.

The Col du Cavale has a long stretch of walking across a vast rocky scree: a rockslide full of big, dark, rough stones that roll and scrape together underfoot, sounding like an echo of thunder from the storm that was still hanging around. It was fun trekking, but slow. At the col, the view from the pass was into heart of the Mercantour, the final park of the hike. 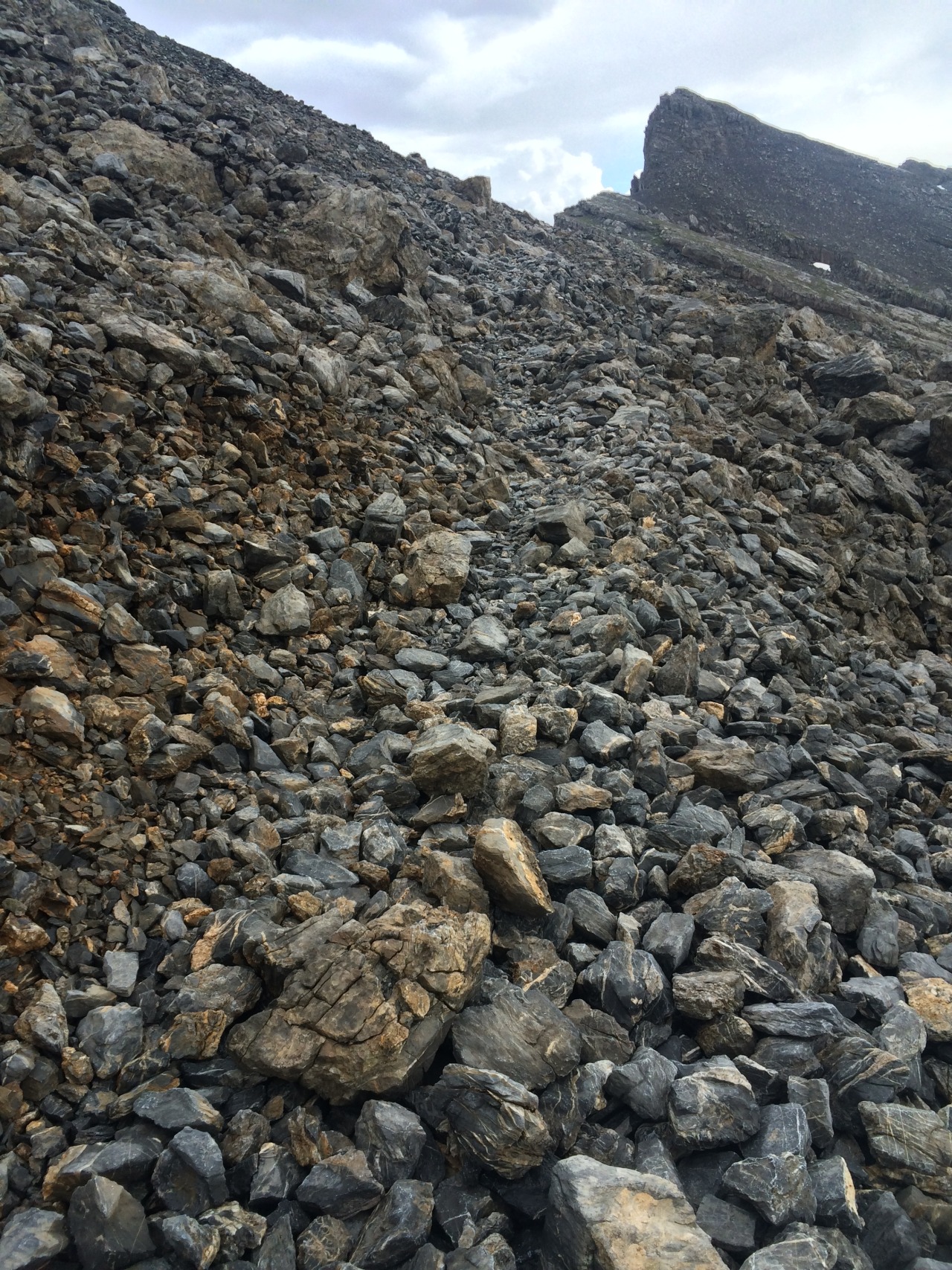 We descended from the col along a limestone cliff, stained black, zigzagging steeply down over more rocks that gave way to a rocky path and finally to a grassy trail. The weather this side of the col was much nicer, sun shining through the clouds and rain that still circled around overhead.

Setting up our tents between the small, beautiful Lacs des Angel, we shared a great camping dinner of mushroom soup, a big serving of macaroni with cheese and chorizo, some tea, and a few pieces of the Queyras croquettes as a treat. The rain held off while we ate, hanging in the mountains all around us but never bothering our campsite. At least, not before we’d finished—finally it started raining again, and we ducked into our tents for the night.

Nice to have company again.