Spent the morning and early afternoon still in town, waiting out the rain that came and went several times, sometimes as a light shower and then other times raining pretty hard. I wasn’t in any hurry. I’d bought way too much food at the store and my pack was as tall as I’ve ever seen it. I really don’t know how I fit everything in. Sitting in a café, I had a coffee and ate a whole quiche by myself. No regrets. It was delicious.

Finally around 2:00, I decided I’d better get started regardless of the weather. I was fine with a shorter day after a few treks on high-level routes, but I didn’t want it to be a zero-day. I followed a road out of town through the suburbs (which are different from those in the US, being just the usual small villages that happen to be near to a larger city) to reach the path again, entering a forest. 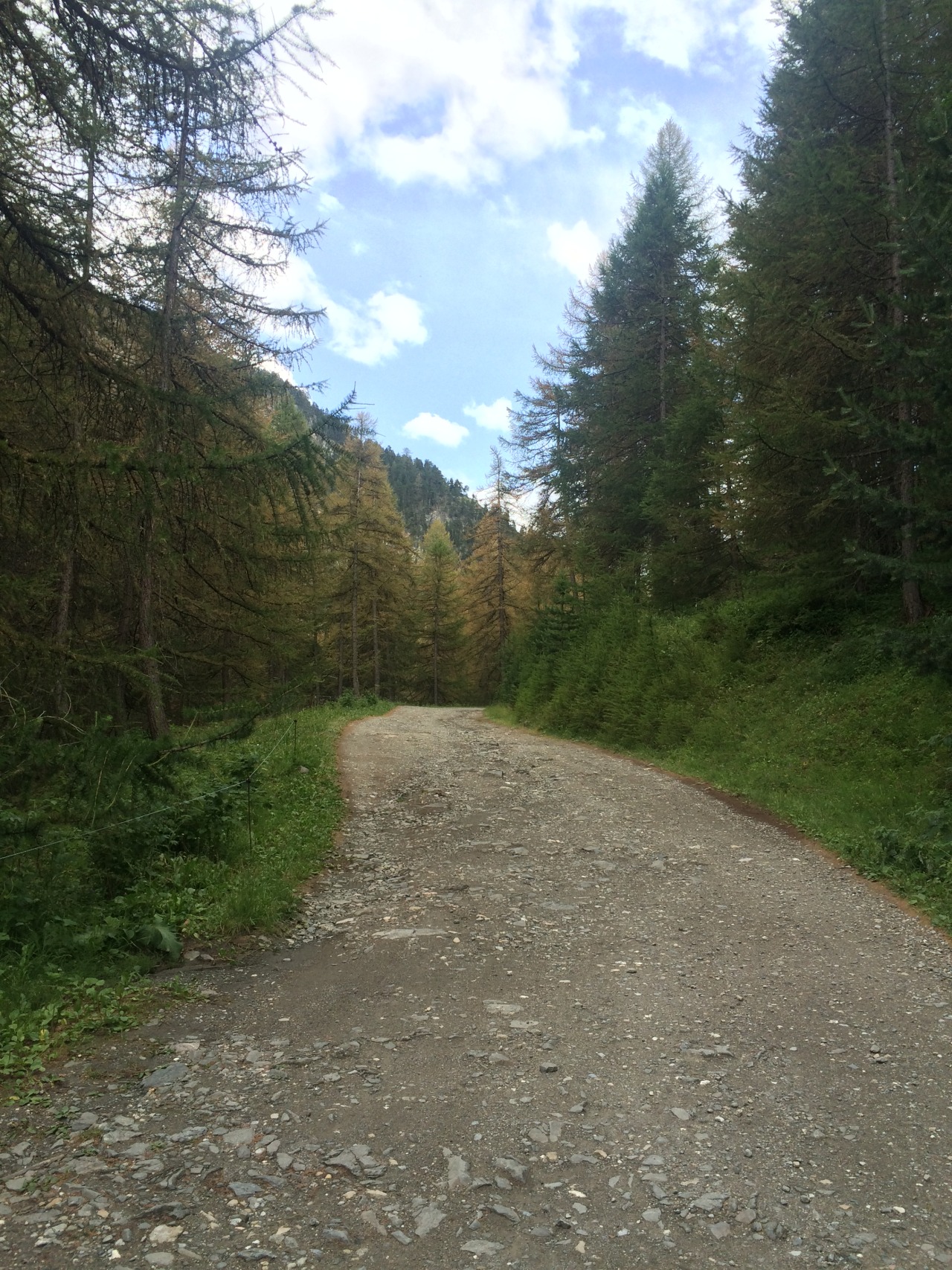 At the trailhead there was a community bulletin board that had a message saying there would be a public screening of a film about hiking the mountains in Nepal. It wasn’t going to be on until much later though. Too bad, looked interesting.

This part of the trail enters the Queyras national park; it’s a region historically known for its forests and woodworking craftsmanship, according to my guidebook. And indeed, the trail took me through a beautiful pine forest, past a cliff face where there were some people out rock-climbing, and upstream alongside a river to reach a small village at Chalets des Ayes. There was only a cluster of stone homes and a buvette (a very small restaurant), but it was a gorgeous place, situated beside a river and among rising cliffs and forested mountains, it was a place I could see myself living, if only I was a farmer or shepherd. For the moment I just appreciated being there.

The trail continued past the village, gaining more elevation as it approached the Col des Ayes. The grade was gentle for the way into the village; now it was steeper. Though my pack was as heavy as it’d ever been, I’d become quite fit for hiking and the extra weight didn’t really bother me that much. In fact, the pack felt more stable than ever, though it was hard to reach up to my camera in the top pocket since it was so tall.

I’d gotten a late start and the forecast called for more rain in the evening, so I didn’t plan to make it all the way to Brunissard. I stopped at an unmanaged shelter a little ways before the col, and soon a light rain fell. It was a pretty great spot: half hiker’s shelter, half shepherd’s refuge, with raised boards for bunkbeds, a desk and chairs, and a wood burning stove. I wanted to make a coffee but my fuel ran out and I never really figured out the stove: I got a good fire going underneath but the burners never got that hot. Mostly I just smoked myself out since I couldn’t figure out how to work the flue for the thing. I think it was just too old to work properly: the door didn’t close all the way and smoke came right out the sides. But it was fun anyway, and warmed up the place up inside. There was a “livre d’or” notebook with messages from other hikers, and it was great to read their stories.

After I’d been there a bit, the shepherd came by with two flocks of sheep and a small pack of working dogs. It was interesting to watch him yell at the sheep, and to see the dogs sprint around the herd, making sure each sheep entered the pen. A few of them ran toward me to make sure I wasn’t going to cause any trouble. The man nodded at me silently, finished his work setting up a temporary fence, and drove off. A sign in the shelter read “respectez la tranquillité dû brebis et celle du berger,” so I took it that he was a man who liked to keep to himself. I can certainly appreciate that.

I was quite happy to have a shelter for the night and to’ve had another fire, smokey as it was. Absolutely beautiful woods and valleys here already, and I was really looking forward to seeing the rest of the Queyras. Forests are without doubt my favorite landscape, and mountain forests most of all.