The 14th of July is a national holiday in France, marking the date of the French Revolution. People used the holiday for a long weekend, and for the next few days there were more hikers on the trail than usual. This wasn’t a particularly great day, as the trail climbed very steeply for a while and then I lost the way in the afternoon. I only had food for a small lunch, and the weather was cold. At the end of the day I had unintentionally reached the border of the Vanoise, France’s first national park, and had to stay in a refuge since camping isn’t allowed in the park. Things just didn’t go according to plan.

I woke up in the morning to some groups of rafters going by on the river, shouting “Bonjour!” between paddle-strokes and commands from the raft guide. It was still very cold, in the single digits Celsius, and I was fine to not be out on the water in such weather.

From Bellentre the GR5 splits in two, one way heading to Landry and the other to Montchavin, both joining again at Moulin. The signs said that Landry was the main route, but my guidebook disagreed, and Landry was the longer way. I followed my guidebook, up some very, very steep slopes (probably mountain bike tracks), climbing through the forest and past a few ski-resort towns. It was hard going and I was feeling pretty fatigued—whether from the steep climbs, the very cold weather, the long hike the day before, or because I hadn’t eaten much, I wasn’t sure. No matter the reason, I just wasn’t able to make the climb as strong as before.

The trail was steep from Bellentre to Montorlin, then again into Montchavin, and again to La Jacottaz, climbing some 1000m straight up dirt forest trails. After a longer climb, I stopped for lunch in the woods, eating the last of my food: an apple, a small sandwich, a few cereal bars. Not much. It was still pretty cold, but the forest was nice; there was a nature trail with signs identifying various birds and plants, and others explaining the cycle of forest regrowth and how the woods are used in all different ways.

I’d meant to resupply in the next town, Moulin, but somewhere between I made a wrong turn and wound up following a different path for a long time. It climbed a few hundred meters more than I needed to, wandering around, making switchbacks, and climbing on steep, muddy, rocky, tree-rooted trails. A group of mountain bikers passed by at one point, stopping to check the map themselves, and I heard a guy say that they’d also missed their turn. Maybe everyone gets lost in this forest. 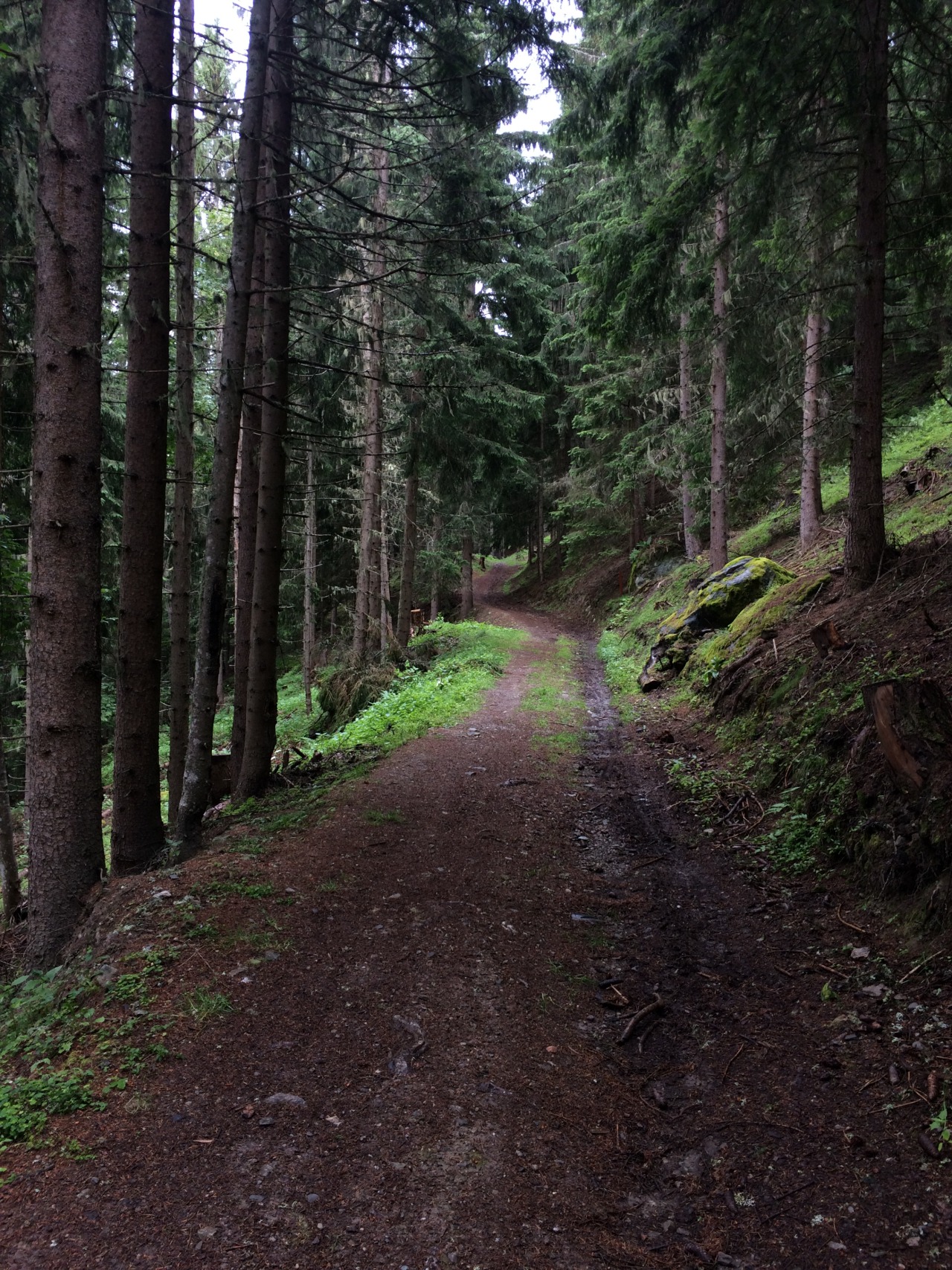 I eventually came to a crossroads and followed the path a little ways, walking on a farm track with a view across the treetops and valley, until reaching the end of the path at a cabin tucked far away in the woods with a sign that read “Sentier Fermé: l’Chalet du l’Ermit.” Nowhere more to go that way. I retraced my steps all the way back to the junction and followed the path the other direction, passing some old farmhouses at Les Esserts, and eventually dropping down at last to Moulin by way of a few other trails and some worn out wooden signs. It had taken several hours longer than wherever the real path went, but in the end it didn’t matter since the stores in Moulin were closed for the holiday anyway.

I decided that I’d have to have dinner at the refuge a ways on, and also buy a sack lunch for the next day to hold me over until I could resupply. Though short of where I’d wanted to be, it was only a couple hours more to Refuge du Roseul, so on I walked. After the descent to Moulin, the trail climbed again, over more rocks alongside a nice river. At Nancroix, a town just a little after Moulin, the trail was closed due to rockslides and I had to detour onto a road. Pavement walking again, not fun when you’re already exhausted. When I reached the refuge I learned that camping wasn’t allowed past that point, or behind in the direction of the town, even though I wasn’t technically in the Vanoise yet. I’m still not sure I agree with the person on whether or not a bivouac is allowed there, but I didn’t want to take the chance so I said I’d stay for the night.

Dinner was pretty good, a lentil soup, then polenta with cheese and a stew of carrots and roast beef, and a narrow slice of cherry pie for dessert (the pie was made with eggs, like a quiche). I spent the evening reviewing my schedule and talking with a group of four hikers who were walking north from Menton. They gave me some bits of advice for the way ahead, and a few recommendations for places to stay. They were nice enough, though keeping mostly to themselves and some French card game the were playing. The refuge was a bit of a letdown: I hadn’t meant to stay in a refuge at all that night (it was only one day since the last refuge), some other guests were really obnoxious, the showers didn’t work well, and someone in the bed across from mine snored all night long so it wasn’t even a restful night.

I’d spent the day lost, tired, and hungry, and had only made a half-day’s progress. At least the rain had finally let up. When you’re on the trail for so long, sometimes things just doesn’t go as you intended. Ça va.