In just about every place I’ve been I’ve heard the expression “If you don’t like the weather here, wait 10 minutes.” It’s usually true: rain rarely lasts all day, and I’ve learned from previous trips that, in case of bad weather, it’s usually best to find shelter early and wait a bit to see what happens. Most often the rain will pass and you can continue after a short rest.

For this reason I stayed in the tent late into the morning, waiting for the rain from overnight to pass. But it doesn’t always, and this weather was here to stay, as a mist hanging in the trees, and sometimes as a light rain. 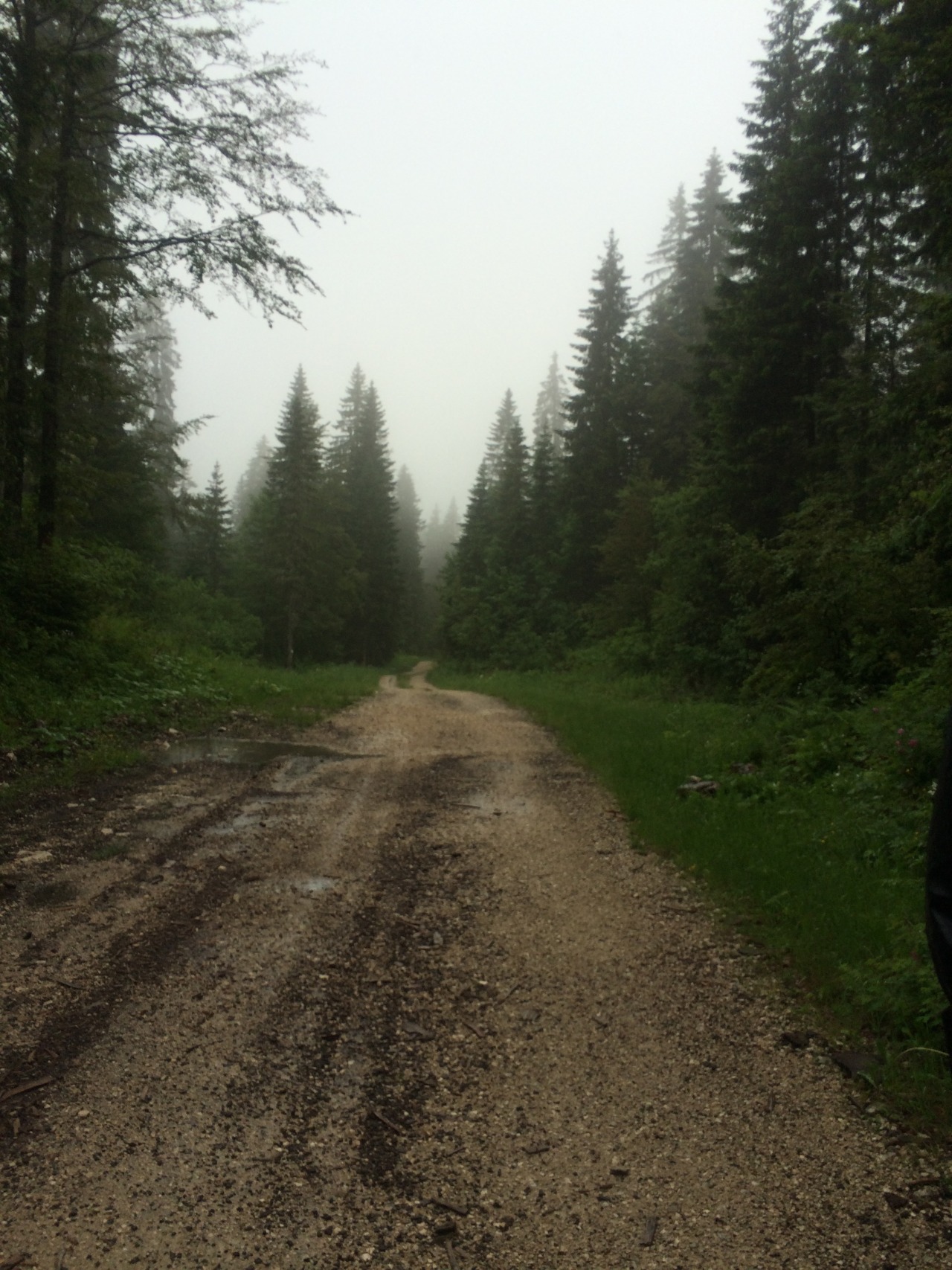 With morning heading toward noon and no other options, we packed up our tents and donned our rain gear: the guys’ tent and sleeping bags had gotten pretty wet since we couldn’t get the stakes in properly. Fortunately my own tent had stayed mostly dry (on the inside), so just a few of my things were wet. It was some 6km to Les Rousses, over minor roads and through soaking wet grass that slicked our pant legs with water. We walked with intent into town, moving as quick as we could over the slippery paths. It was a bigger place than I expected, serving as a hub for skiing and outdoor sports. We went straight into the first restaurant we saw, eager to be out of the rain and to dry off. Sitting at a table inside, we had a beer and some lunch and waited out the rain.

I ordered without really understanding what it was I’d asked for and out came a small salad with basket of fries and a steak with mushroom and cream sauce that was very good. 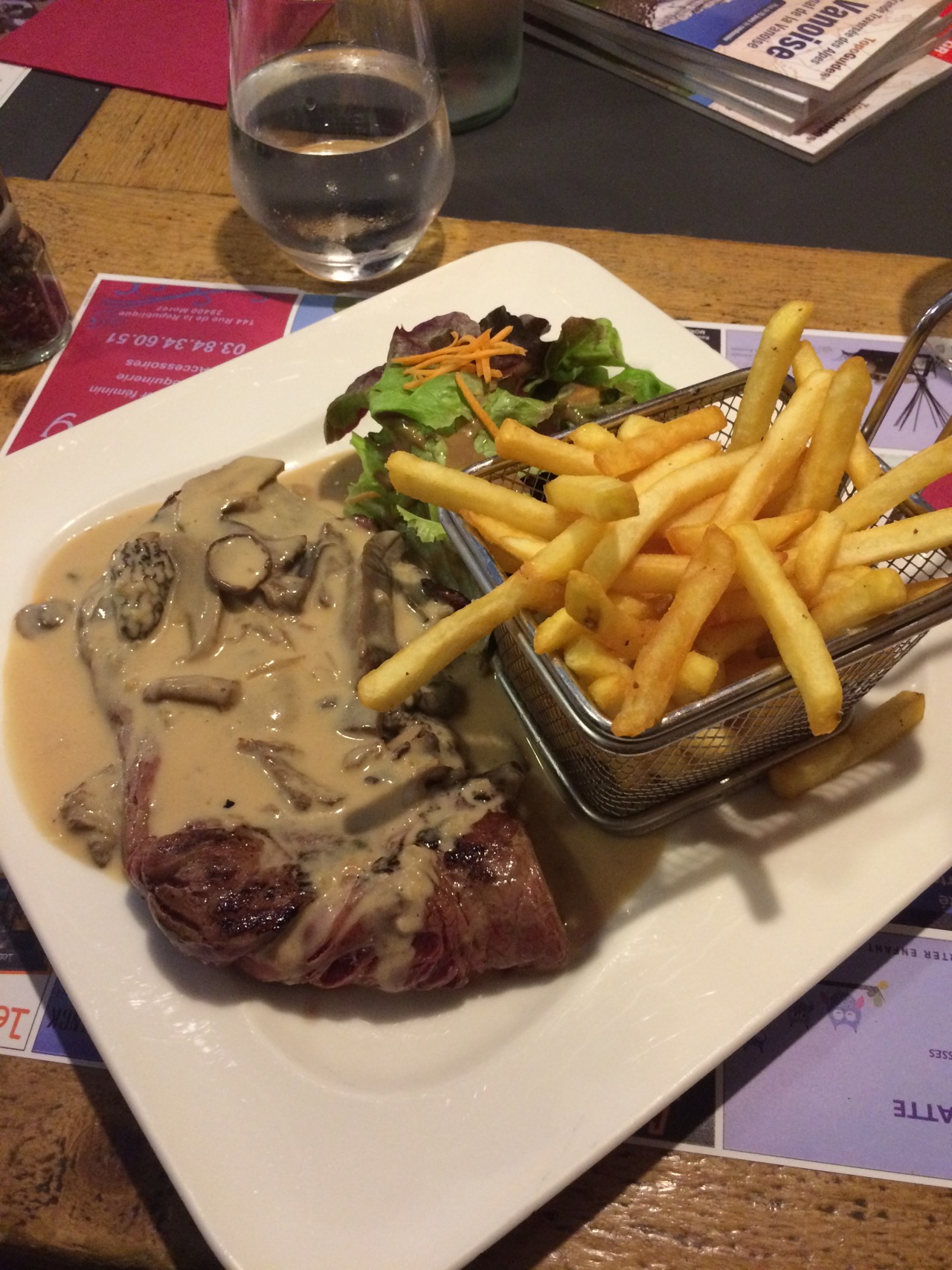 The rain still held on after lunch, and we left planning to reach a shelter relatively nearby and call it a short day. The lake and Nyon were more than we could reach that evening anyway, so we figured it would be fine to get within striking distance and then make up the difference with an early start the next morning.

Leaving Les Rousses we took a shortcut along a busy road, rather terrible walking but saving us an hour or more in the rain. Then in La Cure we made a wrong turn and ended up walking along roads again, but it seemed that the GR5 was also following roads, and we we going roughly the same direction, so we kept on. The rain finally started to let up as we reached the first shelter, which we found occupied. It was a big place, actually a chalet available as a weekend rental, but the people weren’t interested in sharing. Another shelter was close by, just across the (unguarded) border into Switzerland, but turned out to also a rental, and was also locked. We’d not been so lucky with shelters in this region. We walked on, rain still falling lightly, planning to camp somewhere near Saint Cergue. 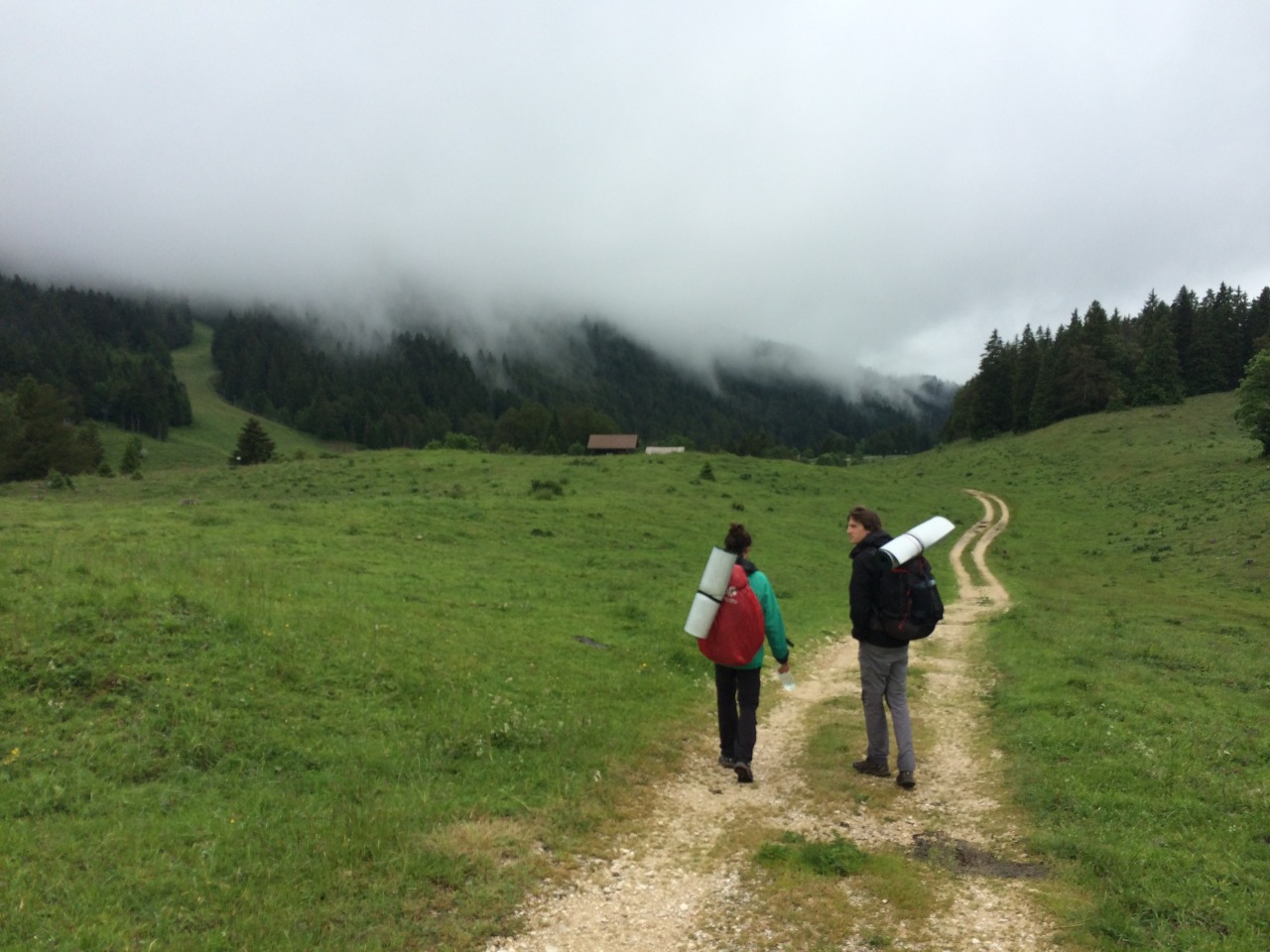 As we approached town we passed a few homes and an older woman who was walking her three small dogs (pugs, not my favorite breed). She walked along with us for a bit, talking with Hugo and Manuel. Apparently we were closer to Nyon than we’d thought, only some 4 hours away. She pointed out a view between houses down to the lake and gave us directions into town (since we weren’t following the trail). It was all in quickly spoken French, so I didn’t catch any of the details, but I understood the gist of the conversation and caught a few names of landmarks.

We reached Saint Cergue about 18:00 and finally saw the sun for the first time that day. We had kilos of cheese but no bread, so we bought the one baguette available in town, even though it was quite expensive since we were in Switzerland. Manuel couldn’t believe a baguette would cost 4€. Hugo tore off a piece and joked that each bite cost 0.50€.

There weren’t markings for the GR5 so we followed a pedestrian route out of town. We were walking out of the mountains now, descending steeply down to the lake, and the road swung back and forth across the slope. By contrast, the path chose to go straight down; a hard descent.

We stopped a little ways on to set up for the night before getting too close to town. Wild camping isn’t so well received in Switzerland as compared with France, and we were headed toward more developed areas where there wouldn’t be any discrete places, so we camped on what looked like an infrequently used maintenance road off the path. It wasn’t much space or terribly level, but it was better than paying for a hotel in town. 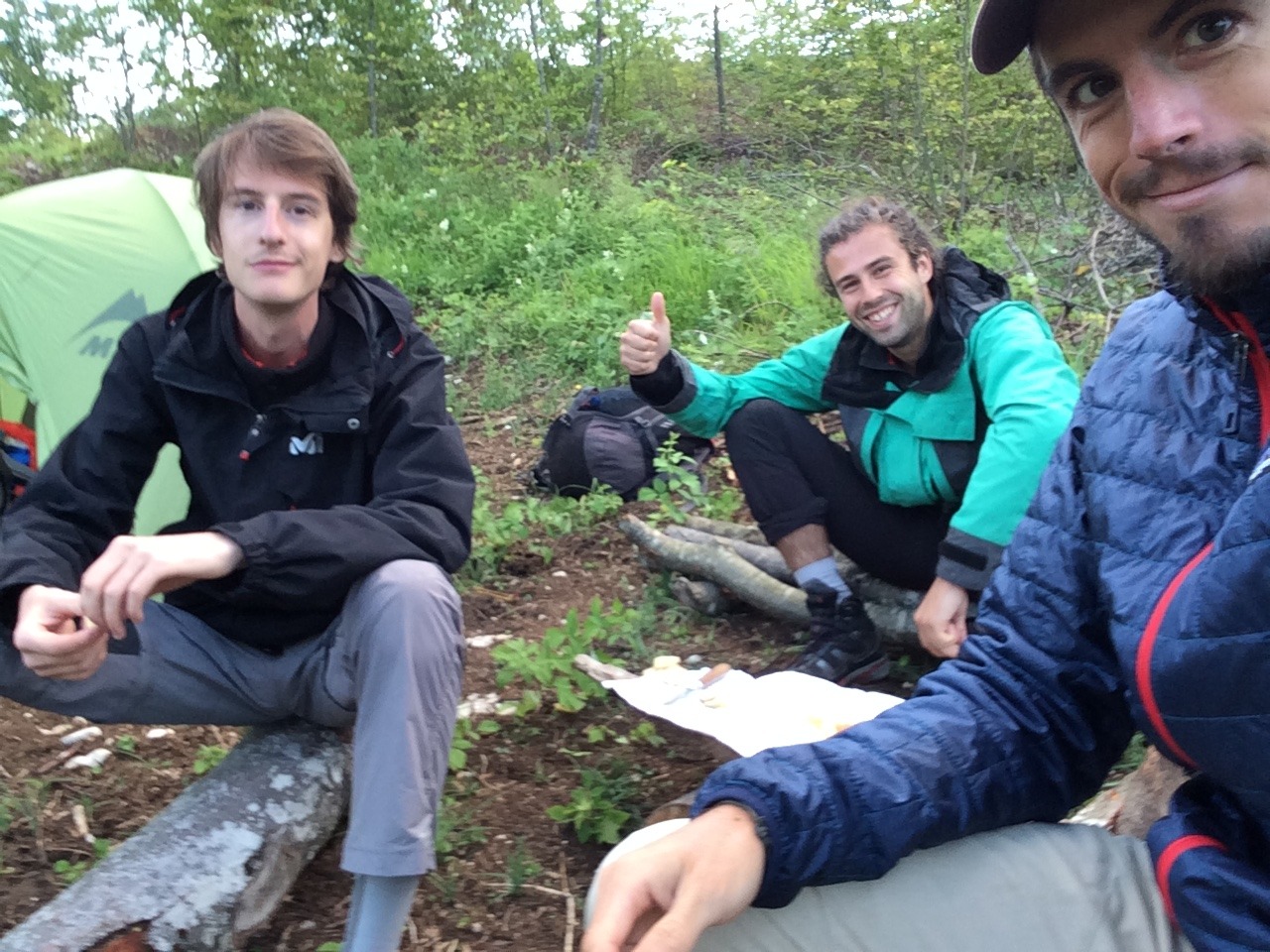 And it was actually a pretty good spot in the end: we fashioned a low table and some stools from a few logs and stumps laying in the grass, sharing the cheese and bread for dinner. There was a great view down to the lake and across to Mont Blanc and all the other peaks. It was an incredible view, especially knowing that we’d be climbing those peaks in just a few days.

There was no space for a fire though, and it was very windy, so we all turned in early to keep warm. I fell asleep thinking of the days ahead, and of hiking in the Alps.