In the morning I ate some breakfast, then scavenged the leftovers from other tables as a makeshift lunch. It was more than five hours to the town of Val Claret and the nearest market, and I knew I’d be hungry. I left the refuge feeling stronger than the day before, walking out onto the trail and into the Vanoise. There were black, snow capped mountains ahead, and I was walking over large, rounded rocks that looked a bit like whales, keeping low in a valley with a marshy river idling by in gentle curves. After an initial climb the walking was easy, staying level along the valley floor. There were beautiful views ahead and behind. 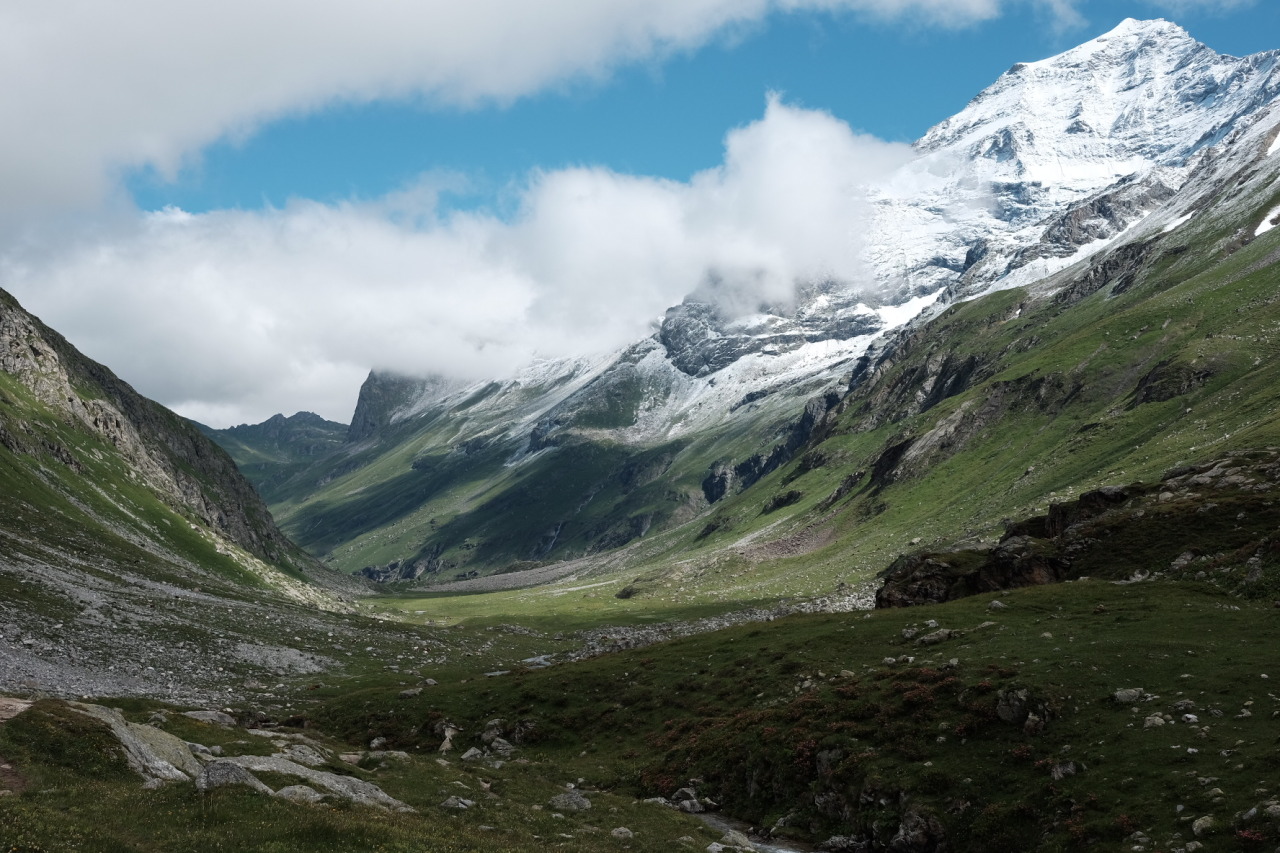 I followed the trail for a few hours, passing the Refuge Entre-le-Lac (where I had read that the Vanoise began), then continuing to climb up a mountainside to reach the Refuge du Palet. I stopped at each refuge to ask about where camping was allowed within the park—in the Vanoise you can only camp at refuges, but not all refuges allow it. Knowledge in hand, I made my way easily over the snow-covered Col du Palet (2650m), stopping to eat the bread, butter, and yogurt that I’d scavenged from the morning’s breakfast. The weather was sunny, but it was quite cold at such altitude and the col was rather windy.

Past the col was a long and somewhat ugly descent, past and under ski lifts, and over wide, dirt service roads. There are two towns just inside the park, Val Claret and Tignes-le-Lac, both touristy, year-round sports resorts without much charm. They stood out as concrete blotches amidst greener landscapes and rugged mountains. I needed food though, so I went into town—and once again got caught by the afternoon siesta, with the shops all closed for another two hours. I had plenty more to walk, so it seemed it would be a long day.

While waiting, I read some more and wrote a bit in my journal—at least, until my pen ran out of ink. I’m now writing in blue ink with a new pen from the Office du Tourismo. At 4:00 the shops opened again and I got some food for the trail. I hadn’t had much for lunch, so I also stopped in at a boulangerie and got a thick slice of pizza (hit the spot), a stromboli-like bread roll (for dinner), and a chocolate filled Berliner-like donut (not nearly as good as the one in Berlin!). Stomach and pack full, I set off again, leaving town after 5:00 with another col to cross and four hours more to march before the next refuge. A late night indeed.

The climb out of town was no better than the descent into it, but once past the first col, Col de la Fresse, the town was out of sight and the landscape improved. I was on the GR55 now, a variant route of the GR5, opting for higher passes and more mountains. I made my way to Col de la Leisse, walking into the evening over large snow banks that filled the undulating depressions between rocky mounts, and climbing a few steeper banks that had built up against the mountain sides. It was a barren, rugged landscape, just snow and rock and the occasional tuft of grass or hearty mountain flower.

When I reached the col the sun was behind the mountain and it was frigid cold in the shadow. I put on my wool hat and gloves and kept walking, dropping down across a rocky scree into a riverbed and past a few shallow glacial lakes, glowing eerily blue-green even at night. In the distance I caught sight of a fox (I think), traipsing easily over the snow across a hilltop, dark against the fading sunlight. A cloud of fog rolled in over the mountains, hanging well above. 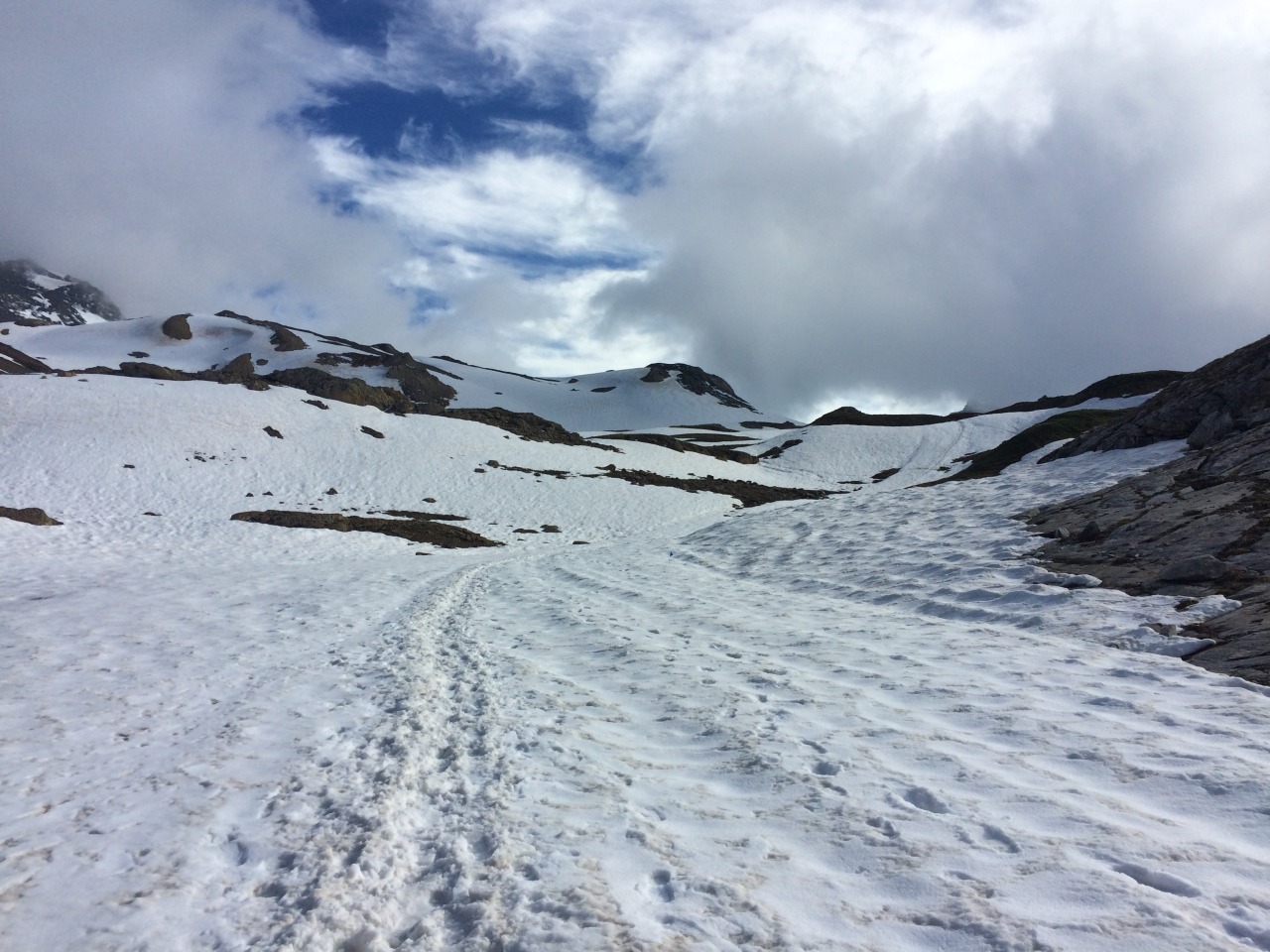 The final approach to the Refuge de la Col du Leisse was incredible. The last light of sunset warmly lit a peak beyond the refuge, while a river fell into a valley beside the path. 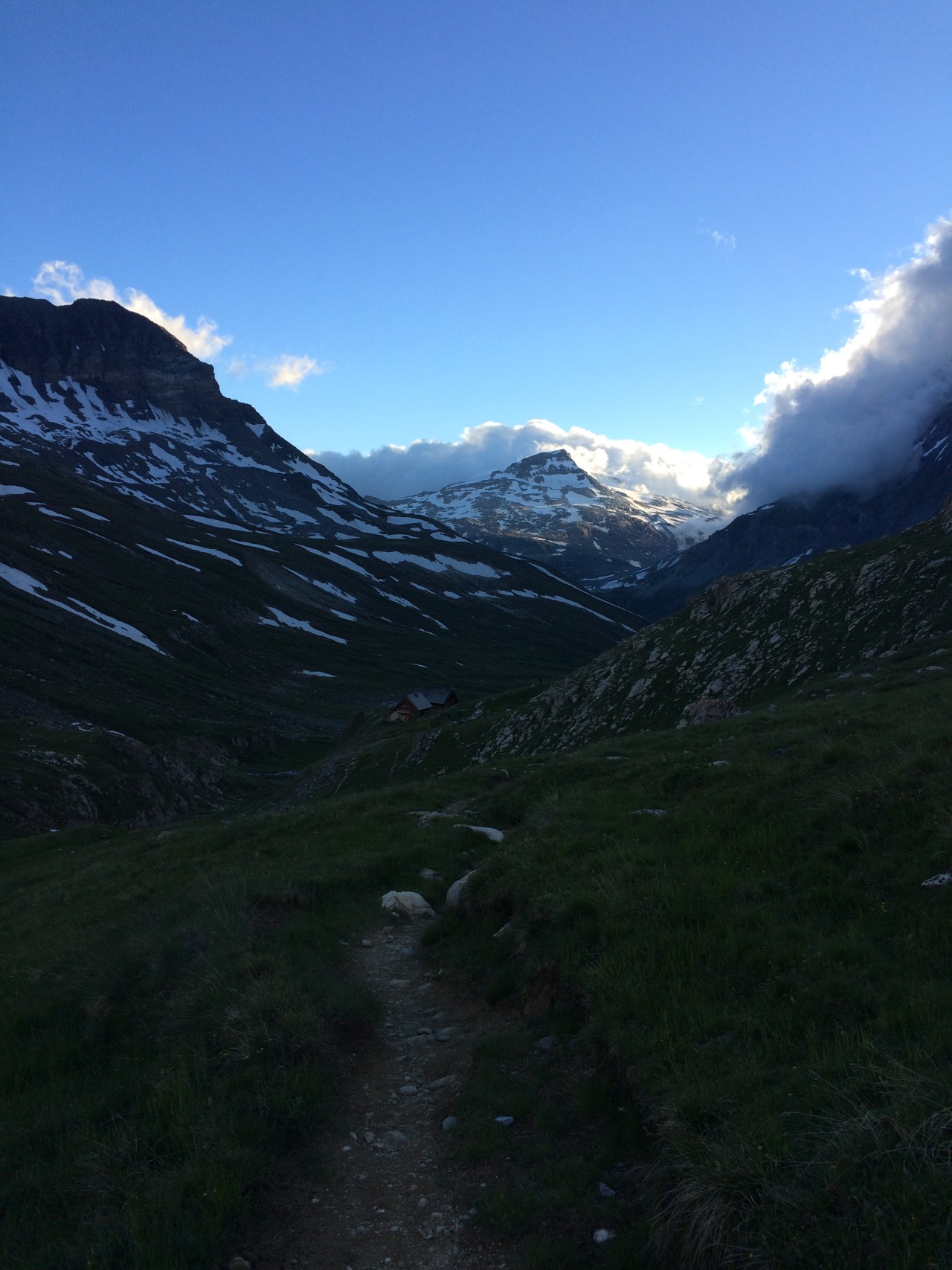 The refuge was perched on the edge of the valley, just a handful of cabins with a grassy slope for camping. It was past 9:30 when I arrived, and freezing cold. I set up my tent amount a few others in the most level patch I could find; a nearby hill was off-limits, since it was used as a helicopter landing pad for supplies and emergencies. I warmed up inside, eating the stromboli and talking a bit with some French hikers making the Tour du Grand Motte for the long weekend. It was late and the others soon left to go to bed; I stayed up a while longer, writing by candlelight.

The morning and evening had been spectacular: good hiking in beautiful scenery. It’d been a long day, over several cols and long snow crossings. I slept wearing my pants, jacket, hat, and gloves, tucked mummy-like all the way inside my sleeping bag, exhausted and cold, but a happy camper all the same.