Most hikers start walking early in the morning and are finished by the late afternoon—animals are more active in the morning, the scenery is nicer in the softer light, and the temperature is more comfortable for walking. The evening can be spent relaxing and recovering, maybe reviewing the guidebook to prepare for the next day. Hard as I try, I’ve not had much luck keeping such a schedule. My days tend to start in the late morning and run into the evening, though with a break in the afternoon. So for the first full day in the Alps I set my alarm for 7 and was on the trail by 8:30. Not bad!

The trail started great, as a forest path cut into the side of a ridge, following along the bends and contours of the mountainside. It soon began to climb, and it would continue over big climbs and descents the rest of the day. Our packs were full and heavy, but we kept on at a good pace. While climbing up a track the trees opened and there was a great view back across the lake, stretching end to end along the horizon.

Not long after, the path crossed an old stone bridge over the Dranse Torrent. It’d been a week since Hugo had showered and he couldn’t resist: he stripped naked and washed himself and his clothes in the river. Now here was a mountain man: he bathed in cold rivers, made fires each night from scratch, carried kilos of cured ham, cheese, and bread for meals, and could identify a few edible plants as well as some poisonous ones.

Being more civilized, I kept my shorts on and used my shirt as a washcloth to rinse my face and head.

After nearly a week of walking with the guys, I’d come to realize that I preferred the freedom of hiking on my own. They were good company, but felt that I enjoyed the experience more as a solo backpacker. It’s hard to explain. So while the guys stayed behind to wait for their clothes to dry, I explained myself and set off on my own.

Almost immediately I lost the trail. Some independence! I wasn’t actually lost, but I couldn’t figure out which way the trail went. Finally I found the way: behind a building there was a small path leading uphill. Walking alone again on the trail, I felt a rush of happiness and knew I’d made the right decision.

I kept walking for a few hours in the afternoon, over smaller climbs and through the villages of La Plantaz, Les Clouz, Théry, and Mérou. Just then, I came around a corner and saw the guys sitting at a bench having lunch. It turns out they’d taken a variant route (our guidebooks disagreed about which way was the variant) and had managed to get ahead of me. We walked together just a bit farther, to another crossing of the river, where I stopped for my own lunch and for a long rest during the heat of the late afternoon.

From the river it was another big climb, stretching a long way over two sections of a rough, dirt trench that rose up at a steep grade. It finally leveled out, joining with a track by some farm houses and emerging from some woods into open pasture. Past the barns was another climb over a large, grassy hill that brought us to Le Grand Chesnay and a few more farmhouses; we stopped for a rest and to take in the view. 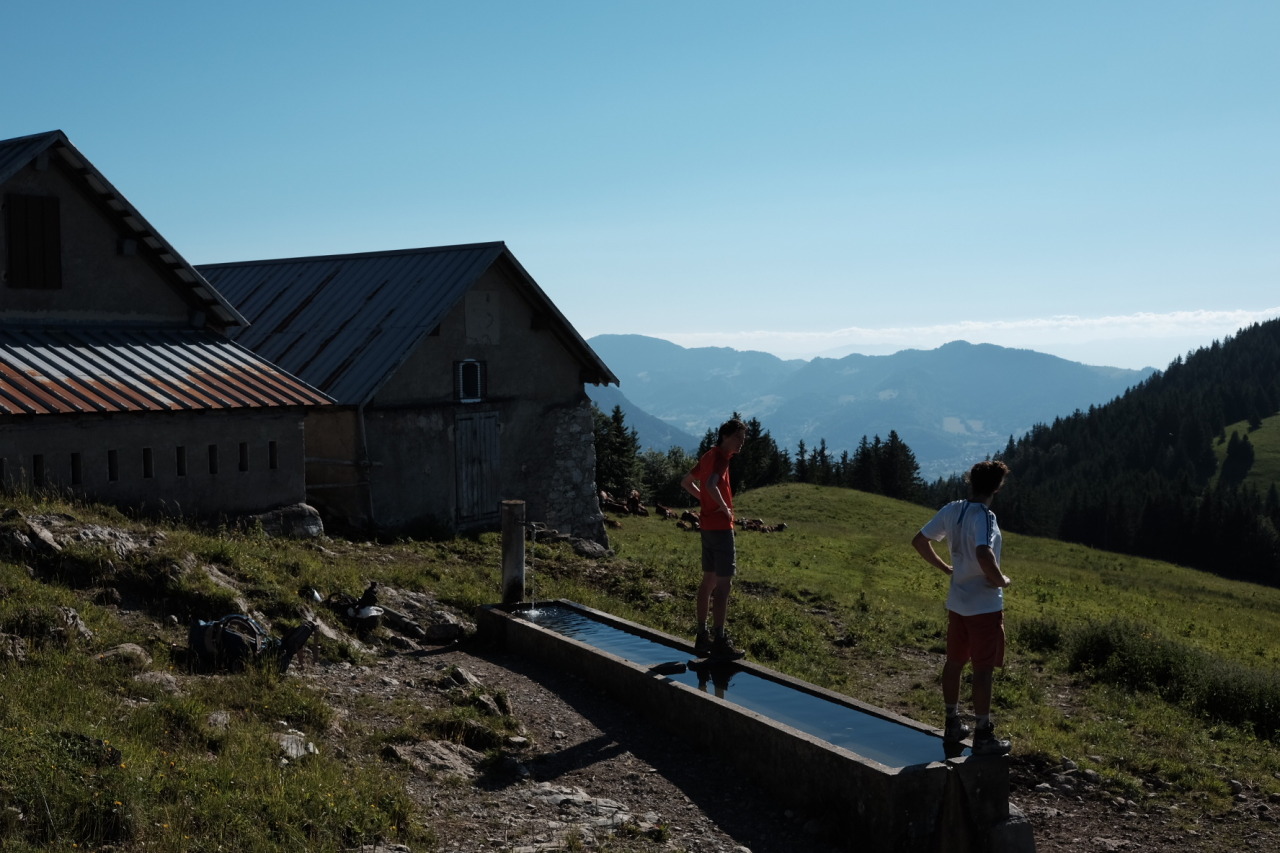 Following that was yet another climb—they were getting more difficult—straight up a steep gravel road in rough condition. The guys climbed faster than me and were soon out of sight. I’d mentioned camping for the night at a lake a ways on, so I figured I’d find them there if I couldn’t catch up.

I kept on climbing, descending, and climbing some more, along a path that was more steep and more rugged than anything I’d done before. After a long ascent I reached the top of Tête des Fieux, the first real mountain peak of the trail. My legs where exhausted the view was spectacular: a full, 360° panorama of the mountains ahead and around to Lake Geneva behind. 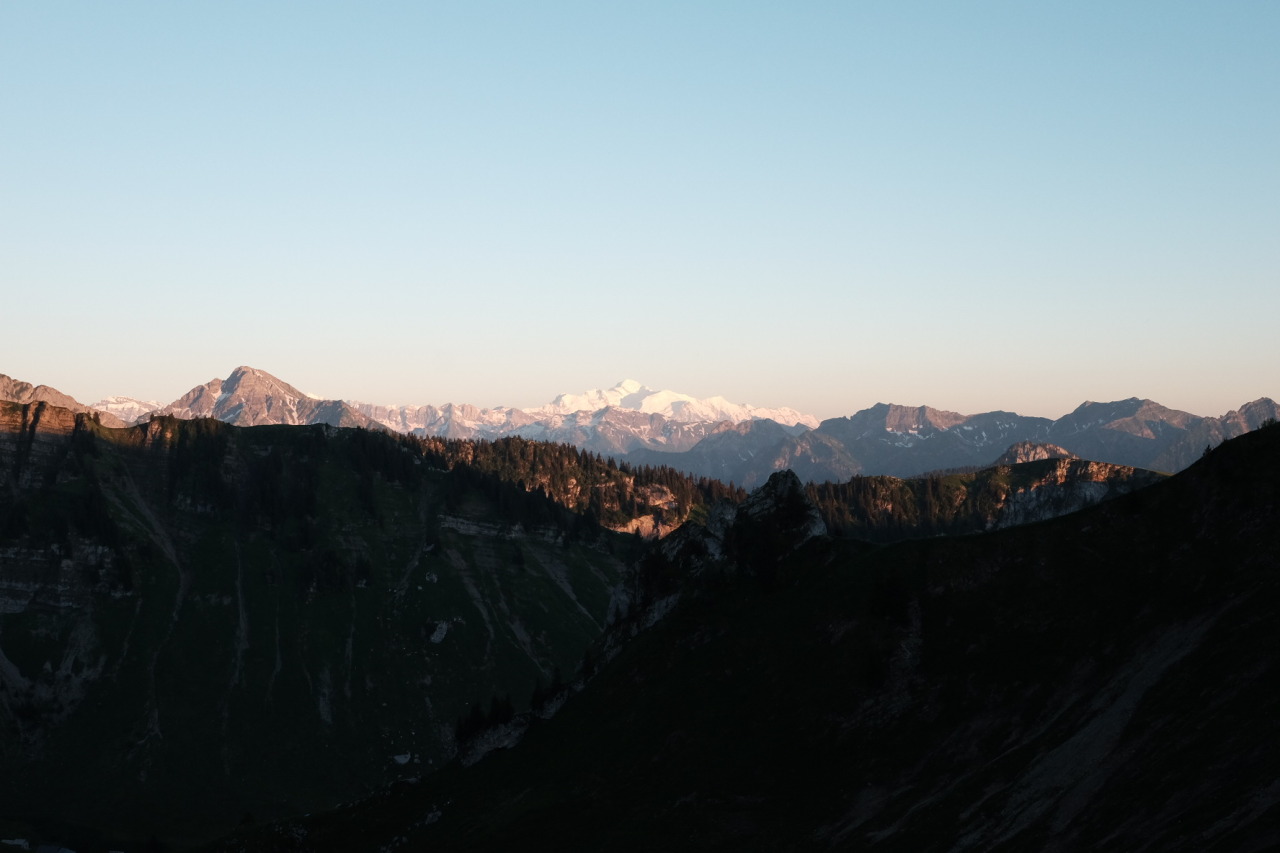 I took a short rest, but couldn’t stay too long since the sun was headed for the horizon and I had nowhere to camp on top of the peak. I needed to cover a few kilometers more to reach the lake. There was a fun walk along a ridge, and I enjoyed views across the range the whole way. 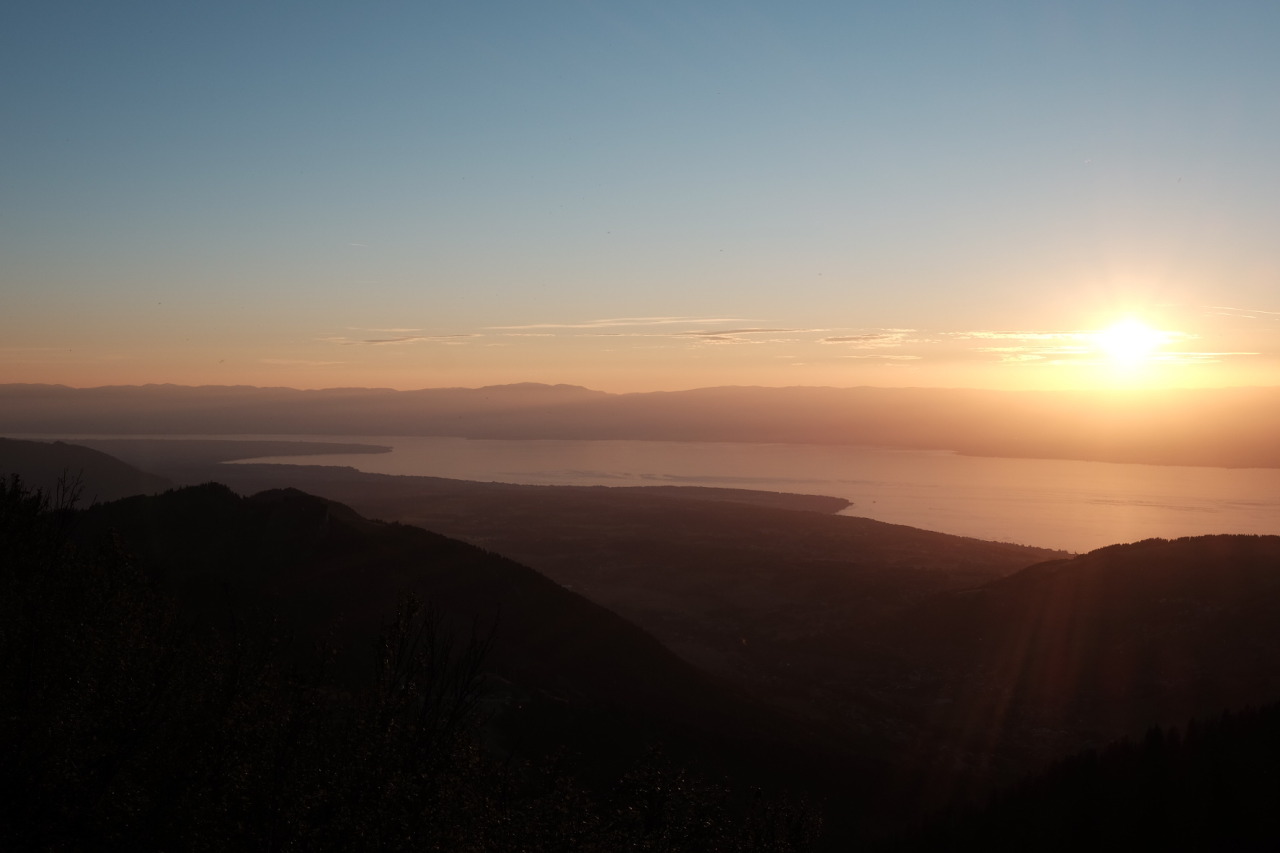 It was now past 9PM and I faced yet another climb, up to the top of a ski lift (and then a little bit more) to the summit of Pointe de Pelluaz. From there I walked along a another, more narrow ridge, climbing to a second summit before descending at last to Lac du la Case. The lake was situated in a basin at the feet of several peaks, and their reflections in the water were beautiful.

It was now past dark and I couldn’t go any farther, so I set up my tent for the night, too exhausted to eat much for dinner. I hadn’t seen the guys in hours and there was still no sign of them, though there were a few other tents set up by the lakeside. It had been a long, long day, and it didn’t take much time before I was sound asleep.

This was by far the hardest day of the trip, some 14 hours start to finish and nearly 30km (19mi) full of climbing and descent. There are actually two routes for the start of the GR5 and this was supposed to be the easier one, so I can only imagine what the route from St. Gingolph must be like. It made for quite an introduction to hiking the Alps. Far more difficult, but also more rewarding, than anything else I’ve ever done.