I woke early again, catching a view across the valley of morning light climbing up the other side. The sight of the valley in the morning was just as beautiful as the night before. My side was still cast in shadow and quite cold, and when I made my way back onto the trail I was wearing a few layers of my warmer clothes.

The sole objective for the day was to climb Le Brévent, described by the guidebook as “a huge mountain [that] holds snow well into the summer…[but] there is no finer stance for admiring Mount Blanc.” The guidebook’s plan for the previous day finished at Refuge du Moëde Anterne, but I’d already gone on from there to reach my campsite. Even with that lead, there was still some 1300m more to climb.

The trail started off fine, built from packed dirt and rocks, and using stepping stones to ford a lot of runoff waterfalls rolling down the mountain from the snow above. It soon turned rocky, and the trail was marked by cairns in addition to the usual painted blaze. Even then it was vague at times, and more than once I had to find my own way. It was good weather, fortunately; the guidebook advises caution if the weather is poor. 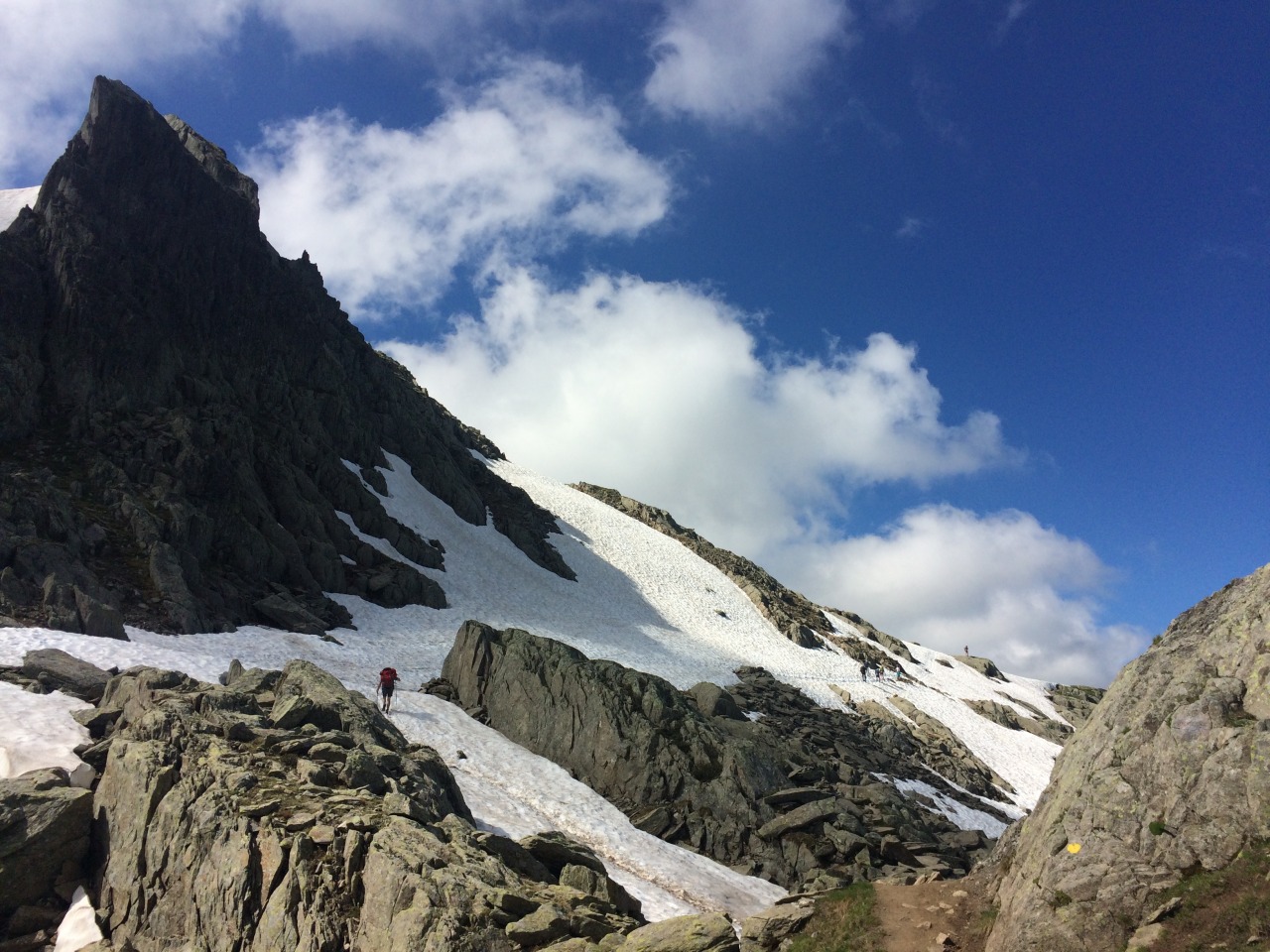 The climbing got steeper, to the point where I had to set aside the trekking poles and put hands on rocks a few times. As I got closer to the col, the rocks gave way to snow. Snow is tiring to walk through, but actually easier to cross over since it’s more level than the rocky climbs. That said, snow isn’t so trustworthy, and I had a short fall at one point, crossing n angled patch of snow between two chunks of more solid ground, when my foot sunk in and then slid to the side. No harm done, but I didn’t much enjoy it.

I crossed a few more sections of alternating snow and rock to reach the col, which was totally snow covered. The view to Mont Blanc was perfect. Even saw a few paragliders floating past, arcing to and fro around the mountain range. 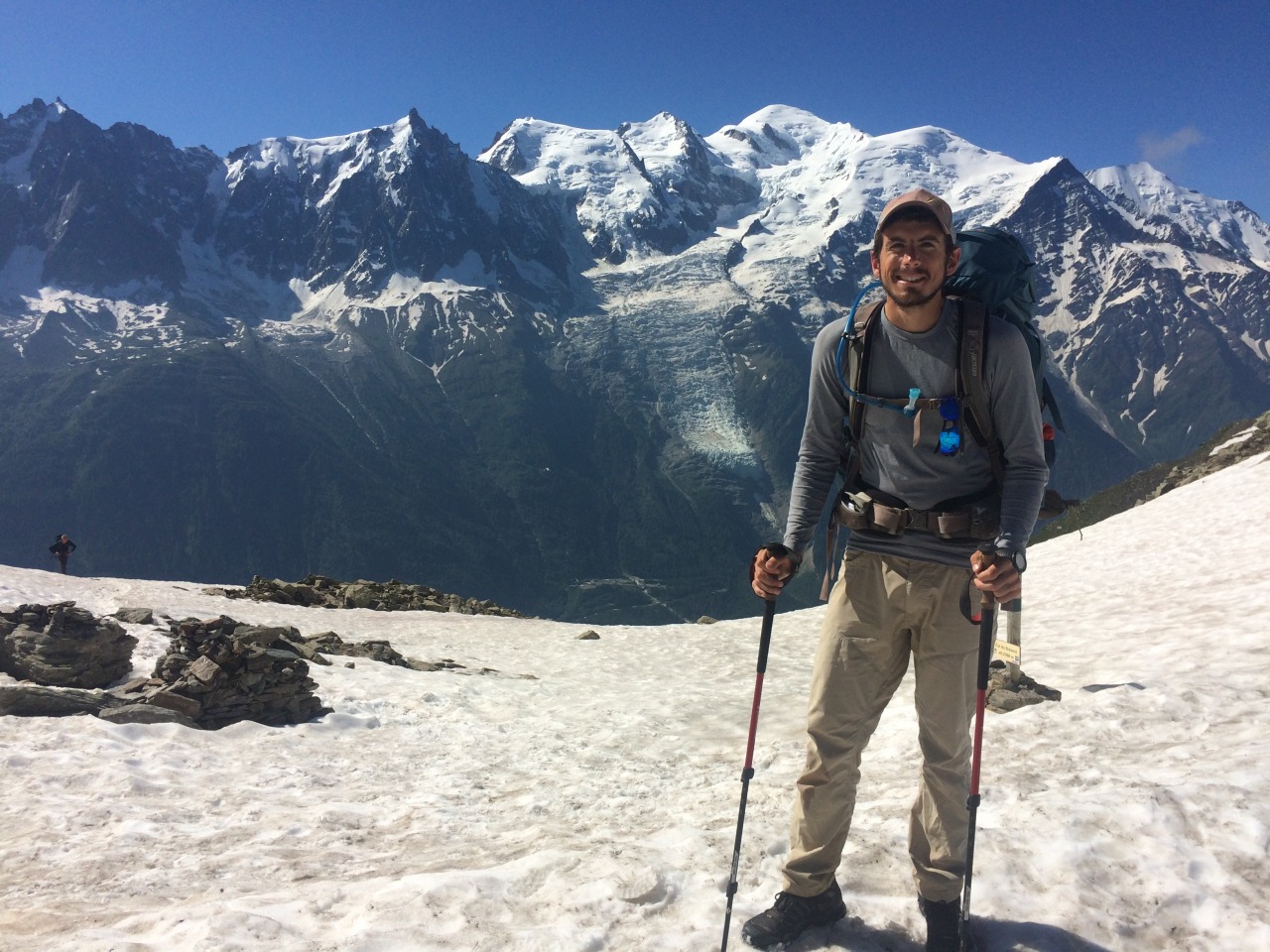 Mission accomplished! Sort of. The col was short of the summit, and the trail actually kept climbing a little ways more to reach it. There were loads of people and even a small restaurant at the top: there’s a tram that takes you straight up, and a different path to the summit is included in the route for the Tour du Mont Blanc, a very popular 10-day hike. The GR5 and TMB share trails for the next few days, and while it’s nice to see people on the trail, these hikers don’t have quite the same mindset as the people walking the GR5, and the path was actually pretty crowded on the descent.

Which was a really long descent, in the end, and the temperature rose as the trail fell. I was still in my cold weather gear, but this side of the mountain was in full sun and didn’t really have any waterfalls, so it was a long and hot descent down into the valley to reach Les Houches. Altitude has a way bigger impact on temperature than I’d thought; it was some 15°C (25°F) warmer in town than at the summit. I had run out of water, so when I finally reached the town hours later I was totally parched and went straight to the fountain for a drink.

Spent the night in town at a small campground; really just a grass lot, but at least it had hot showers and a place to charge my devices. The Scots were staying there as well and we had dinner together, just some random things from what we were carrying. They’re really nice people. In the evening the sunset lit up the mountain peaks, briefly painting them orange.