Another hot day, but I was now heading into the Doubs river valley where there was much easier walking as compared with the ascents I had done in the Vosges.

I made an easy (though steep) descent into Goumois to start the day, about an hour and a half’s walk. The town sits right on the river Doubs, which serves as the border between France and Switzerland. I walked into town about noon and stopped at a restaurant for a coffee. I’ve yet to find the classic “French cafe” that you might imagine; this place at least had outdoor seating. I ordered “un café” and some bread for a snack. The place was empty but for me and one other couple who seemed to be making a trip by motorcycle. Perhaps Goumois is a popular spot for motorcycling: a sign on the restaurant wall read “welcome motorcyclists.” There’s a bridge in the center of the town that crosses the river and enters Switzerland, and I could see across from my seat. I ended up staying at the restaurant a couple hours, catching up on my journal and waiting out the heat of the day. I was in no hurry to pack up and they didn’t seem to mind my staying since the place was so quiet.

I left in the afternoon and stopped a few kilometers on at a picnic area beside the river. I’d washed in the water the day before, but it was so hot I figured another dip in the Doubs couldn’t hurt. I grabbed my towel and stepped in, slowly at first, then forcing myself to drop into the chilling water. Only went under once this time; once was enough! I refilled my drinking water as well, using my filter to fill my reservoir and bottle.

After a snack and waiting for my things to dry I set off again. The path along the river wasn’t muddy (surprising), but was at times full of rocks that made for slippery walking. The ground was covered in moss, ivy, and ferns; the trees wore thick green cloaks and were strung together by hanging vines. It was like walking through an enchanted forest in a fantasy book. 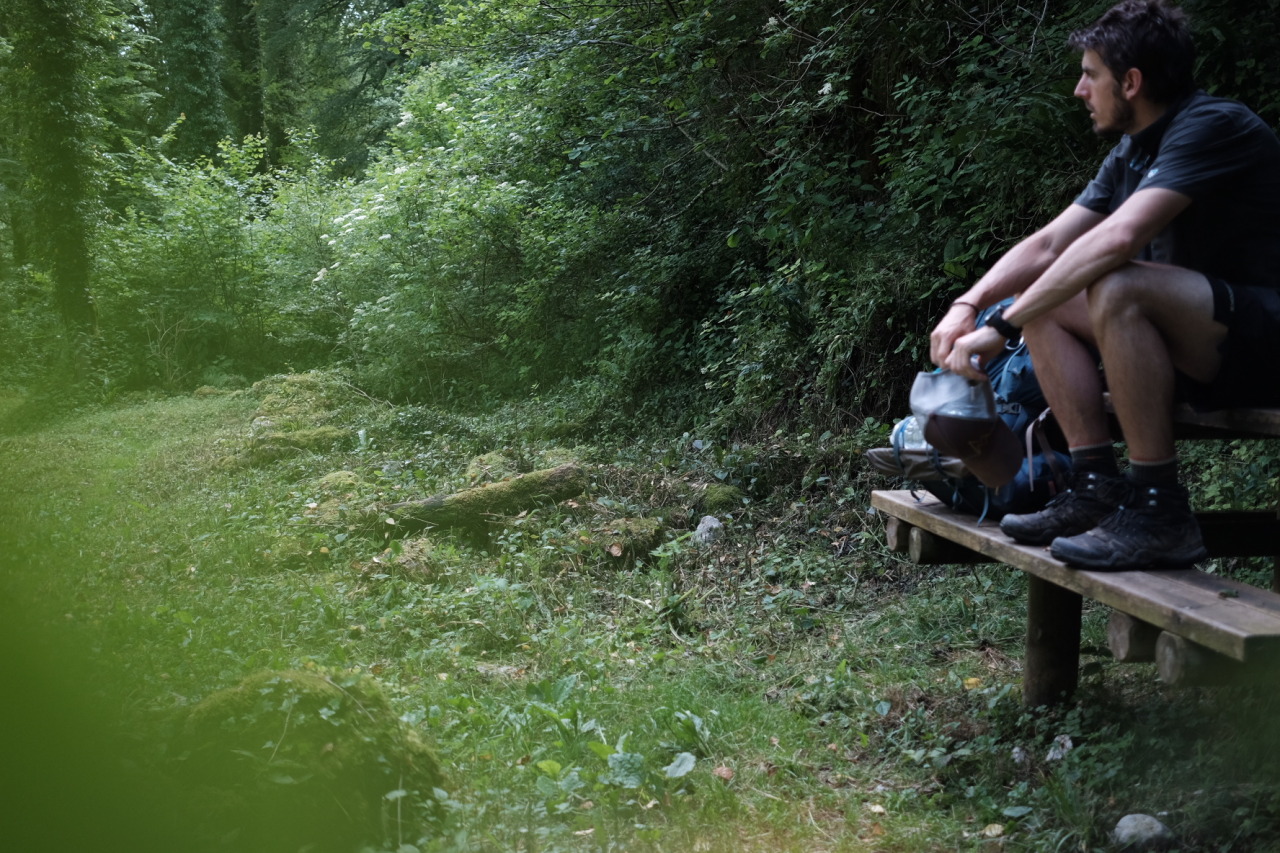 The path continued on this way, rocky but level, following the river all day long: sometimes on ridges above, sometimes on small paths just beside. At one point the river rushed into a short waterfall, only some 2m high but loud as a constant thunder. A turn in the path and the roar faded to silence, giving way to the steady sounding of my footsteps against the earth and to the singsong of birds.

The rocks, big and white like marble, made for slow walking, requiring an attentive eye for each step. When I came across a large shelter around 19:00 I decided to stop there. With an early night I could get an early start, finally getting on schedule to walk in the mornings instead of the afternoon and evening. The abri was built from the foundation of an old charcoal-maker’s camp and had stone walls and a covered back. There was a cave-like room below, wet and cold and dark. I set up my sleeping bag on the back table under a roof and started collecting wood to build a fire since there was a ring just there. 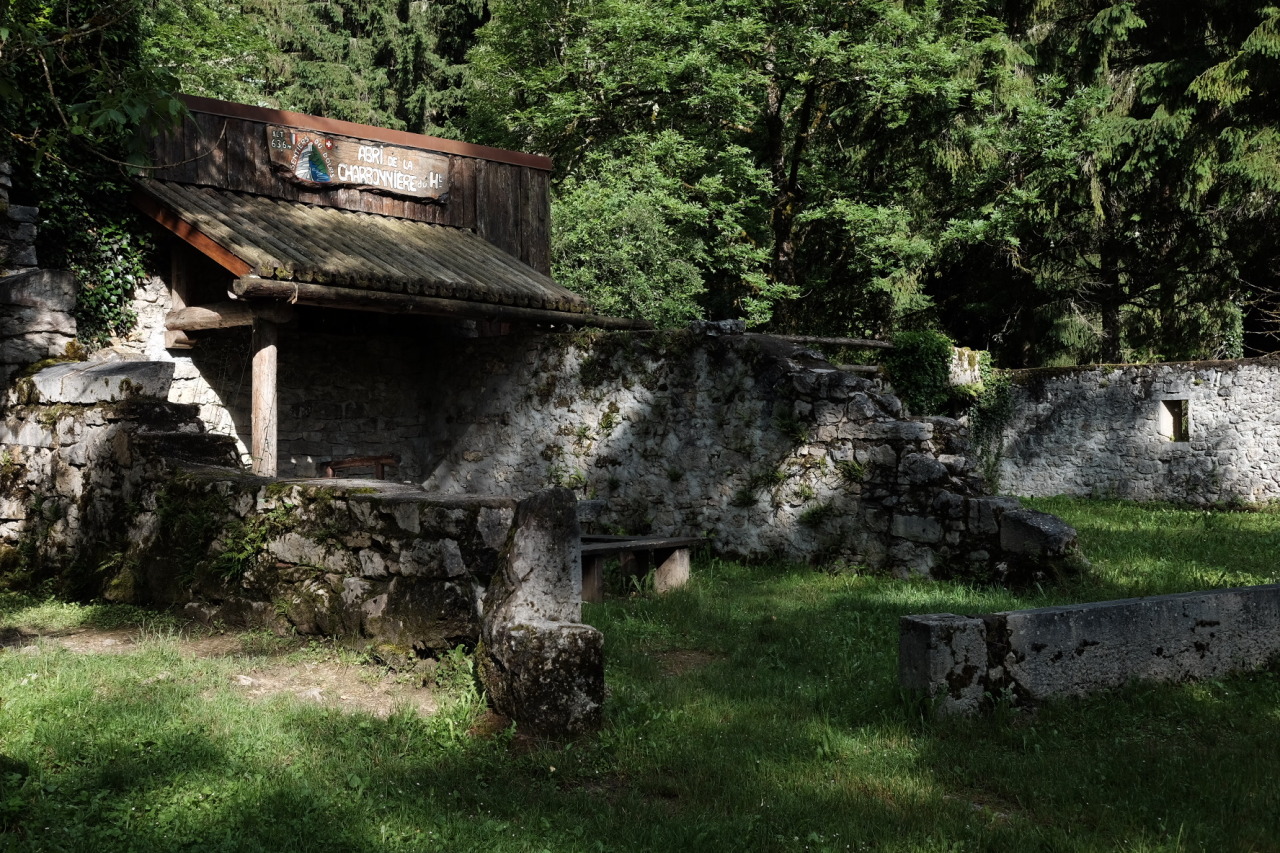 Before I could get the fire going, though, a group of four friends drove in from a road I hadn’t seen. They were staying at a place in town and just using the shelter for an evening barbecue. They’d brought wine, rum and pineapple juice, cured pork sausage with nuts, steaks, chicken kebabs with tomatoes and lemon, carrot salad, pasta salad, tabbouleh, bread… It seemed an entire feast, and they invited me to join. My Uncle Ben’s rice would live another day.

We made a fire with charcoal in the grill and let it heat up. They said there was a good, short hike nearby (which happened to be a part of the GR5) so I put my boots back on and the five of us marched down a long ways to the river’s edge where there was a rapids and the ruins of an old mill. “The Doubs is very cold,” one of them tells me, though I’d already learned that. A fog was coming off the water; it was a very beautiful spot in the half light of the setting sun.

Back at the shelter we ate our full by candlelight, and they gave me some leftovers for the next day. We moved the embers from the grill to the pit and had a few beers around a campfire after dark. Thunder sounded in the distance and the group headed out around midnight to beat the rain. I stayed awake at the shelter, under a covered tin roof and watching the fire, until a big storm rolled through. It was definitely the right call to stop early: the rain came hard and lasted through the night, falling loudly against the roof. If I wasn’t in a shelter I would have been in trouble. It wasn’t the early night I’d planned, but still another good night on the trail.

Oh, and apparently Britain left the EU. So there’s that.