I woke up about 8 in the morning and had breakfast with Jonathan and Emily. In France, breakfast is usually slices of bread with butter and jams or honey. We had some muesli as well. Morning coffee is poured into a bowl, like a cereal bowl, rather than in a mug. It’s prepared like regular coffee (i.e., Americano). If you have a coffee after lunch or dinner, it’s prepared more like an espresso and comes in a small mug, like a teacup. I’ve twice made the mistake of using the coffee bowl for eating rather than drinking out of. 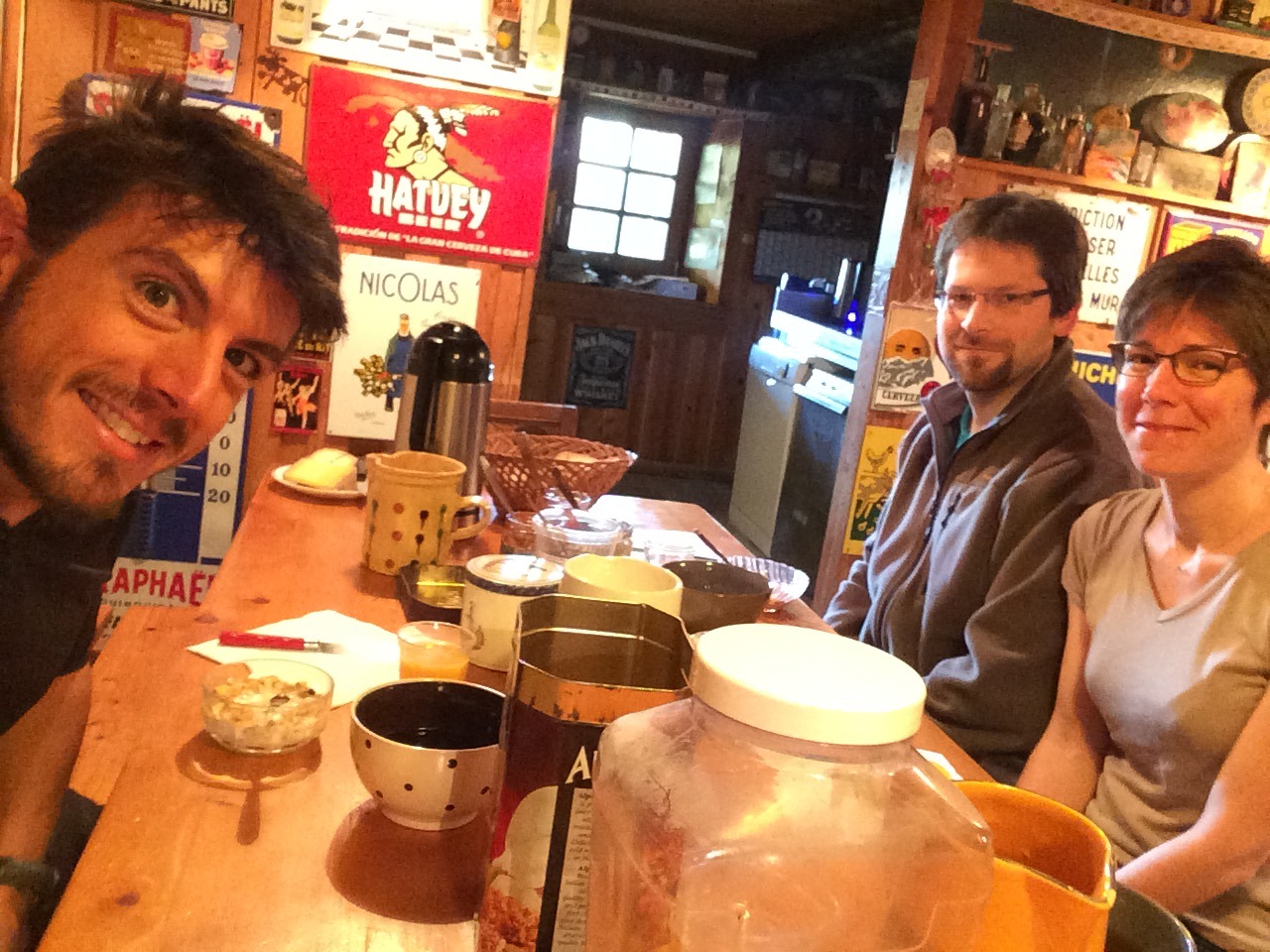 Jonathan and Emily were planning a day hike from Les Gras, a small town not too far off the GR5, and offered to drive me there. I hesitated, since this was supposed to be a beautiful area and I didn’t want to miss it. In the end I took the ride, figuring that I was already short on time and low on food (markets are closed on Sunday). A ride into town would save me a day and I could and resupply at the market.

The ride to Les Gras was indeed quite nice, passing by farms and over hills. We saw markers for the GR5 along the road, so I wasn’t missing out on much after all. And it was nice to spend a little while longer with Jonathan and Emily.

When we reached the town, we found the only market was closed for the day. In this region of France (the Jura), markets are also closed on Mondays in most small towns, and Les Gras was a very small town. Emily gave me two apples from her lunch, then we said goodbye and walked separate ways. I, with two apples, a few small pieces of bread, and two cereal bars. Not much. But I’d had a good breakfast, and had only to get near Pontarlier—some 25km—where I would have another place to stay, at the house of Brigitte’s sister Catherine.

Before walking, I stopped first at the town’s church since my clothes were still damp from washing them in the sink the night before. I still haven’t learned that clothes don’t dry overnight.

Leaving Les Gras in the afternoon, I followed a farm lane for a long ways to reconnect with the trail. It was a nice walk, with open fields and passing tractors. When I picked up the trail it was an easy gravel road, descending alongside a small river. Really pleasant walking. 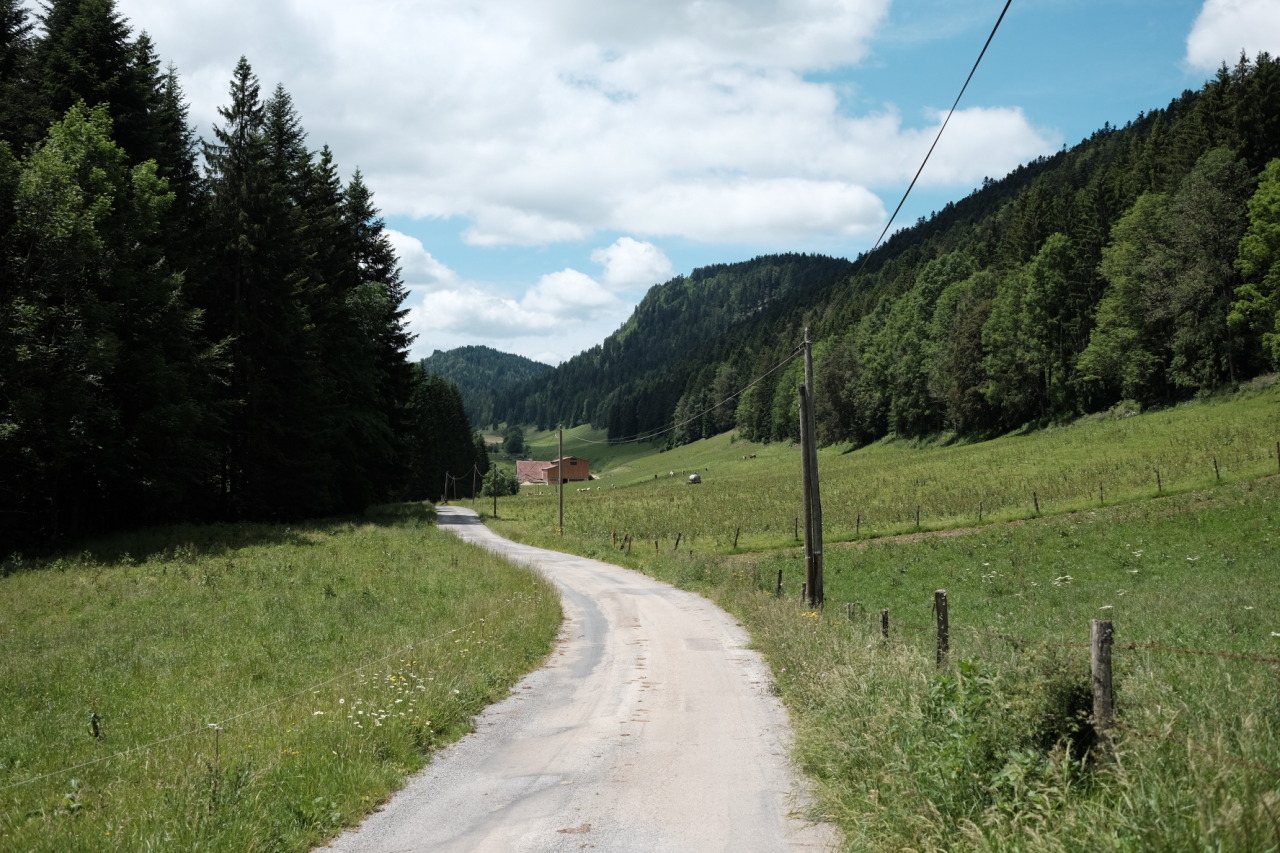 I kept on through the afternoon, reaching Les Alliés where I stopped for lunch and to cool off (another hot day). I tried to phone Catherine to let her know I would be arriving that evening, but the call wouldn’t go through. I suppose it’s hard to connect a call from a US cell phone on a Swiss network to a landline phone in France. I was able to email Brigitte, and asked her (in my best broken French) to call Catherine.

I left Les Alliés about 5:00PM, figuring I had a few hour’s walk to reach Catherine; I figured I’d be there about 9:30PM. The road climbed out of the town quite a ways up, and somewhere along the way I started to feel pretty ill. My stomach was in knots, and my head in a haze. I made it to be top of the climb and down the other side, then missed a turn. I retraced my steps, feeling worse and worse. At an intersection I missed another turn and had to backtrack again. I was finding it hard to focus.

The trail lost everything it had gained, then started another long climb. There was no one around, and I was hours from any towns. I pushed on because I had to, step by step, up, up, up, feeling worse still. For two hours I kept on.

Finally past the climb, I found a sign near some farmhouses that told me I was still two and a half hours from La Cluse-et-Mijoux. I wasn’t going to make it to Catherine’s place that night, I realized. I checked my map and located a shelter some 2km away and resolved to make it there. I could rest for the night and get to the house in the morning.

When I reached the shelter the sun was setting and it had become quite cold. The shelter was only a partial one: no door, and the windows were open spaces in the walls. It would cover me from rain, but not offer any warmth. I put on my jacket and wool hat and lay my head down.

Half an hour later I wasn’t feeling any better and figured I might have fever. I decided I had to call Catherine and get out of the woods. This time the call went through, thankfully, and I did my best to describe where I was; it wasn’t far by car, only some 10 minutes, and she arrived shortly.

I was in tears. The day had been totally exhausting, beyond any other; my stomach felt like it was being twisted and my head was in a fog. Catherine drove me home and made some tea. Brigitte gave her instructions for some homeopathic medicines to help my fatigue and nausea. On the television was a soccer match, England against Iceland. I think Iceland won; they’ll play France next. 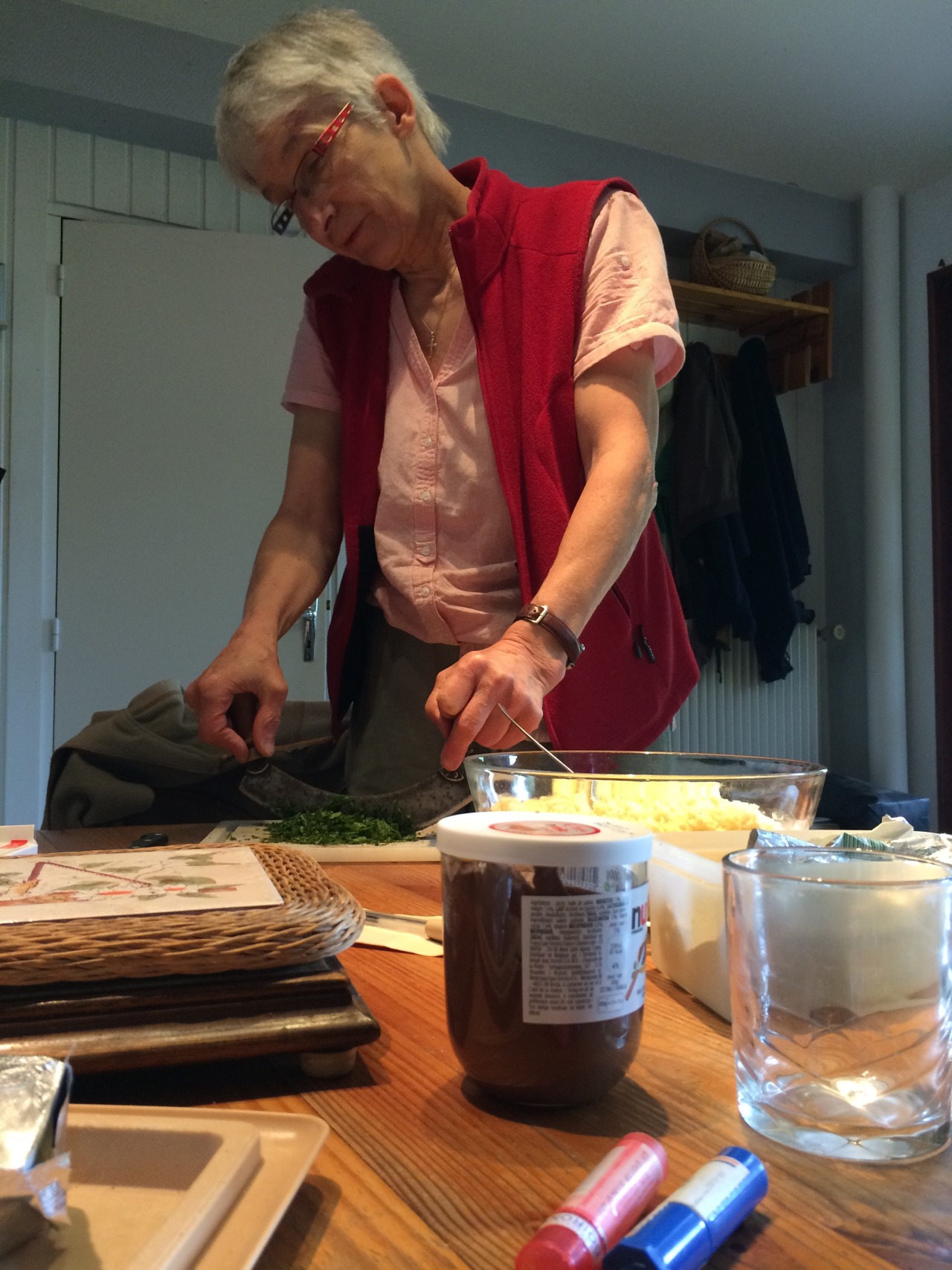 I started to feel better at the hands of good people, and sat at the table talking with Catherine and her husband for an hour or so. They had plenty of good stories: apparently a carrier pigeon from Germany got lost and stopped at their house. They were trying to return it but didn’t speak German. I guess the bird has a GPS tracker, and they’d watched it fly from France to Germany in six hours.

Finally I gave in to my fatigue and went up to bed, grateful beyond words to have such friendship from people I’d only just met. The room had a skylight and Catherine pulled the blinds down. I slept like a rock.