I slept well, warm enough inside my sleeping bag despite the freezing temperature outside. A few times I poked my head out, and boy was it cold. Woke in the morning before 6, early because bivouac-ing (7pm-7am) is regulated in the park. There was a thin layer of frost all over the outside of my tent and on the ground. I knew there’d be snow to cross, but I hadn’t expected such cold weather!

I went into the shelter and had breakfast, muesli, stealing a bowl of coffee and some milk from the pot left at another table. The shelter was in a valley, and it was still cold in the shadow even after the sun has risen.

The trail went around behind the shelter, following the river to descend a long ways into the valley. It crossed a few more rocky sections, hard rocks jagged and stair-like, eventually leveling out at a riverbed and walking on more gently on a grassier path. I stopped for a rest at Pont de la Croé Vie, an old stone arch bridge over the rushing Torrent de la Leisse. Fields of wild flowers grew nearby. 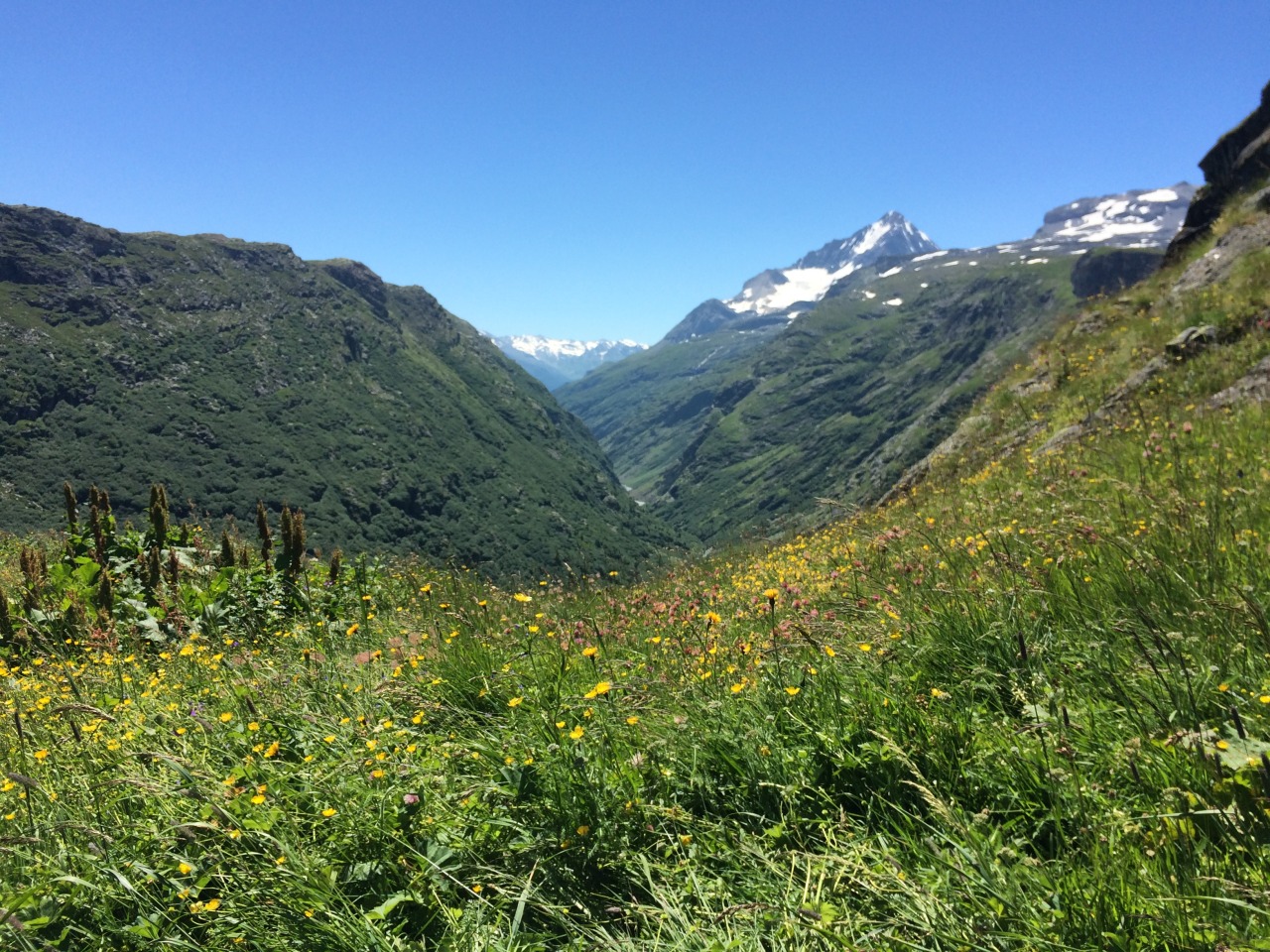 There are three main routes through the Vanoise, the GR5, the GR55, and the GR5E. I’d switched to the GR55 on entering the Vanoise, since it was supposed to be the most exciting route of the three. After reviewing the guidebook a few times, I decided to switch back to the GR5 at Refuge du Entre Deux Eaux, just past the bridge and the halfway point of both variants. It was a hard choice: the 55 promised better climbing and incredible views, but it also passed through a city at Pralognan-la-Vanoise and was more likely to be buried in snow. The 5 stayed more level on a “balcon path” near the roof of the valley, crossing fewer cols but promising good views to the towns and mountains around the valley. Maybe I’ll do the rest of the 55 on some later hike. Before making the switch, I stopped at the refuge for a coffee and small snack: a compote du pommes, which turned out to just be a homemade applesauce, more or less. Good, though. 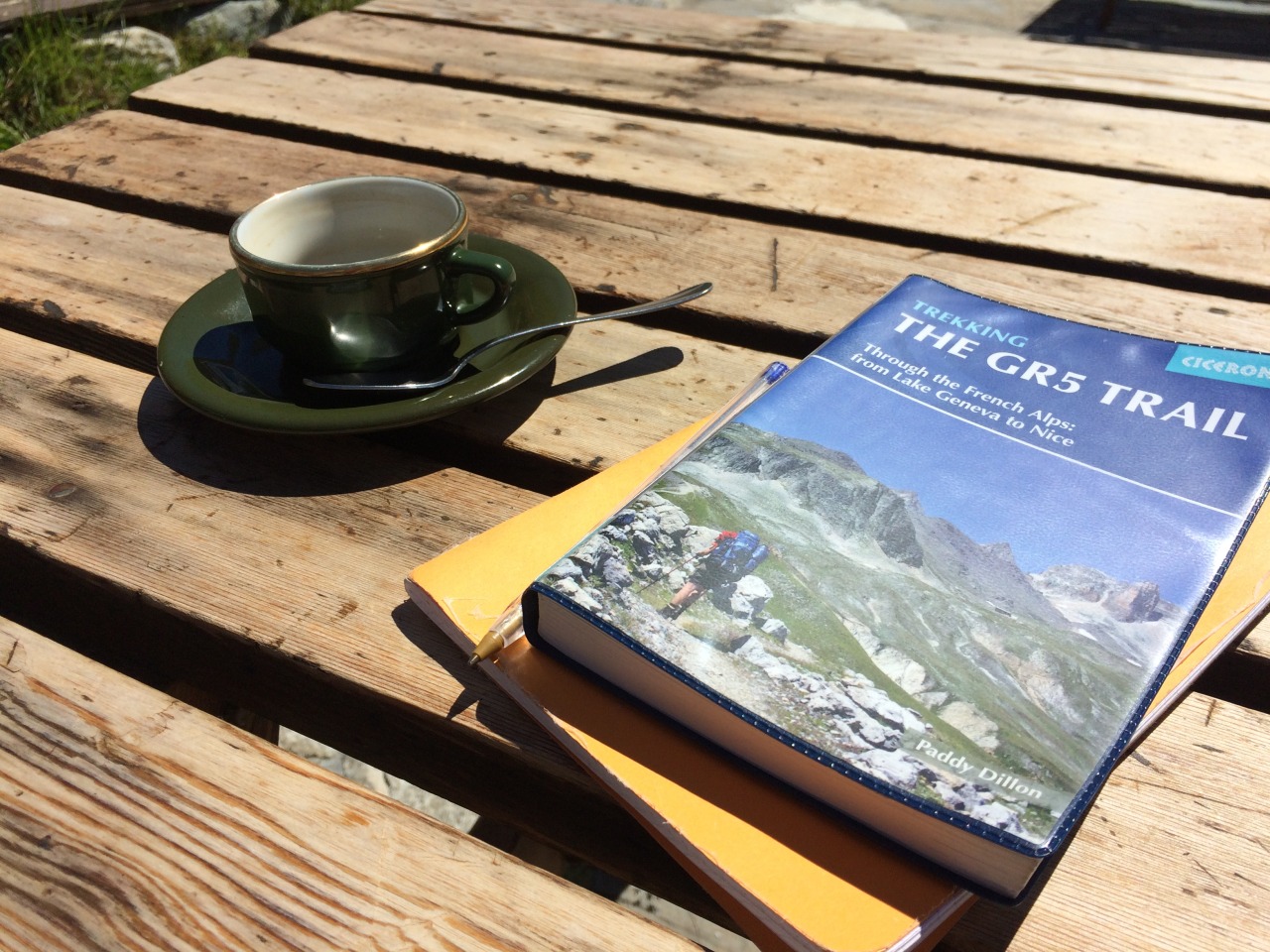 After the break I followed the GR5 once again, climbing a ways up, through a pack of cattle lying lazily on the trail, to reach a pair of lakes at Lacs des Lozières, where I stopped for long lunch. It was a very peaceful place: no other hikers passed for a while, there were no marmots crying out, the weather was better now that it was the afternoon, and the lakes calmly reflected the summit of a glacier-covered mountain. I stayed a long while, in no hurry to leave. 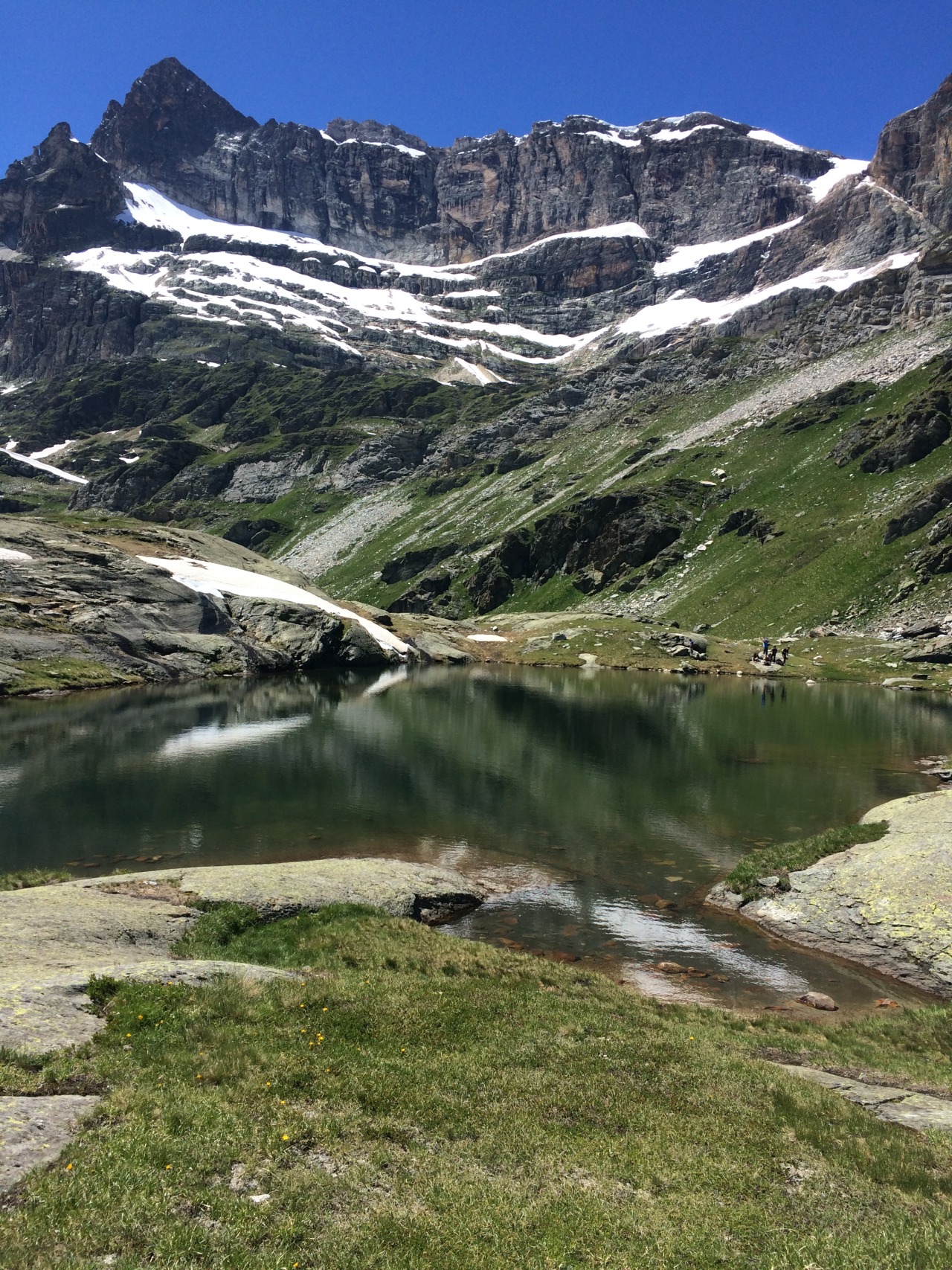 The section after the lakes was fun, crossing a stream before a short climb to a very rocky section. Big slabs of rock, cracked in places, sprawling out all around. The way was marked by cairns—little piles of stacked rocks—except there were so many that it was unclear what the real route was. I just walked whatever path my feet followed, making my own stepping stones across cascades and connecting the dots cairn to cairn on open faced rock.

Eventually a more distinct trail returned, though the rocks continued, leading to a long and convoluted descent toward the refuge. I passed close to a number of bouquetin at various times, some younger ones even; they weren’t so afraid, since hunting is not allowed in the park. 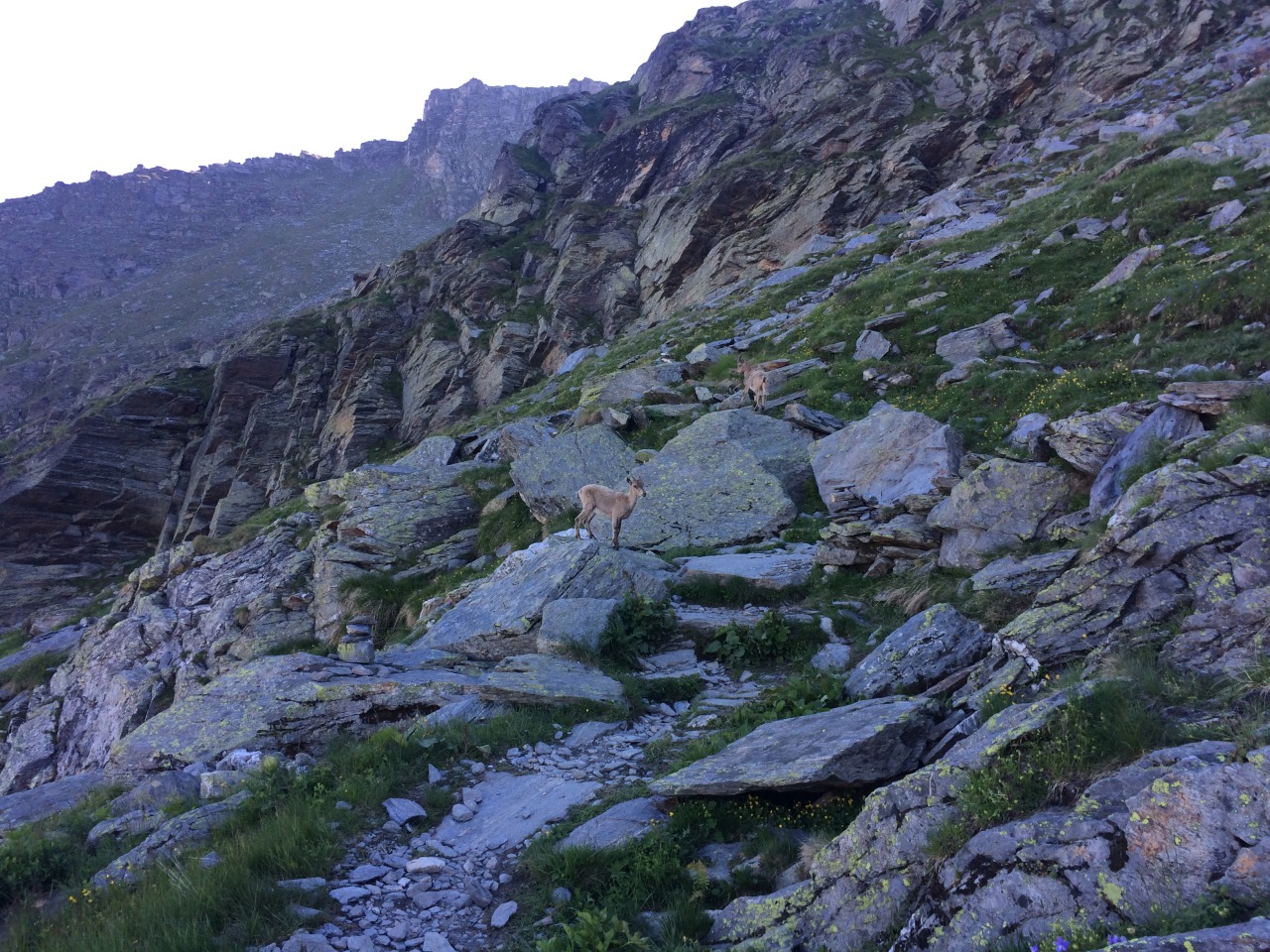 Again the sun was setting before I’d made it to the refuge: I’d taken a few long breaks, since after reviewing the schedule I realized that I had more days to spare than I had originally thought. I’d been making good time the whole trip, and now could relax a bit. On the descent, way off in the distance, there were a few farm homes that I thought were the place; another late night. Then I came round a corner and suddenly the Refuge de l’Arpont appeared as though from nowhere, a beautiful river stone building with accents of wood framing around doors and windows, built into a niche in the mountain blockhouse style with a half circle capping one end. Inside, there was a large dining area with great big windows offering panoramic views of the mountains.

I paid 5€ for a place to bivouac and found that the area designated for campers was on an angled hillside; no spot was level, and tents were crowded next to one another. Wild camping would’ve been much more preferable; silly to have to pay for a site worse than I could find on my own. I didn’t have much choice.

That evening there was another beautiful view of mountain peaks glowing in the light at sunset. After dark, the stars and moon filled the sky, and nothing else mattered. 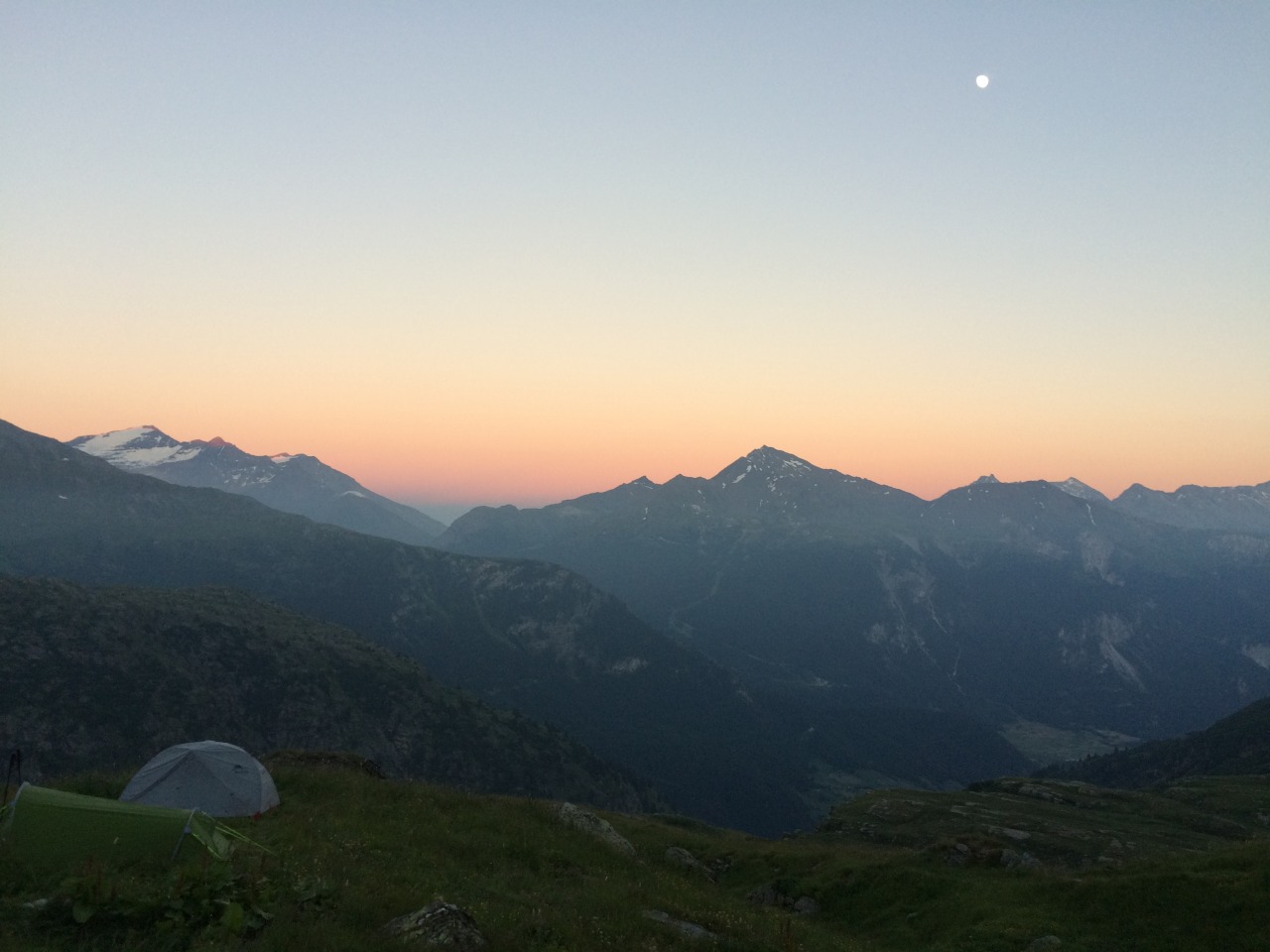