I woke up in the morning feeling much better than the days before. Catherine had a simple breakfast ready, of bread and jams and coffee. A nice change from the handfuls of granola or muesli I have on the trail.

I packed up my things and off we went, stopping at a Carrefour (grocery store) for a few items: cheese and prosciutto tortellini, some more cereal bars, an apple, and a few other things. She drive me into Malbuisson, a day’s walk otherwise, driving alongside Lac de Saint-Point. We stopped beside the La Poste and called Hugo, one of the guys we’d met the night before. They were nearby, having camped just outside the town. I hugged and thanked Catherine for everything, then walked off with Manuel. Merci beaucoup encore, Catherine!

Hugo and Manuel are both 23 and spending the summer hiking before going back to school. They’d done a sea-to-sea, East to West trek across Corsica the summer before, walking parts of the GR20, a very popular and beautiful hike. They spoke English well enough, though I still tried to practice my French when possible.

It was easy walking to start, with good weather, and we talked most of the way—about how heavy our packs were, the various gear we’d brought, what we did for work, and the rest. It was nice having company and the kilometers seemed to pass a bit faster. The path followed just beside some railroad tracks into a town, Métabief, and we stopped to have a snack.

The way out of town was up a ski slope, first on roads, then local paths, then over grass and tree roots. It was steep, but we kept a good pace. The morning had been cool, so I was wearing my pants and long sleeve; now I was sweating from the climb and afternoon sun. It was about an hour to the summit, passing between grassy slopes and clusters of trees. Ski slopes open up for mountain biking in the summer, and there were lots of cyclists out, racing downhill over rocks and branches, turning through banked curves, free-styling over jumps and gaps.

When we reached the summit of Le Morond (1419m) we stopped for another break and to enjoy the view. And what a view it was. You could see all the way ahead, past Lac Aleman to the Alps, the whole range sitting blue on the horizon. It was my first view of the Alps after two weeks of walking, and man were they intimidating, standing as Goliaths over the lake, peak after peak after peak.

We continued, down a bit from the summit past an artificial lake of bright crystal blue water and on to the next peak, Mont d’Or. Ahead, the rugged Alps. Behind, the rural Jura and many valleys and plains beyond.

We kept walking into the evening, still figuring out one another’s schedule and walking habits. The path led through open grass fields, ready to be grazed by cattle later in the summer, past a farm where some horses were standing just beside the path, and up into some sparse woods. About 19:30 we found a decent spot and decided to set up camp. 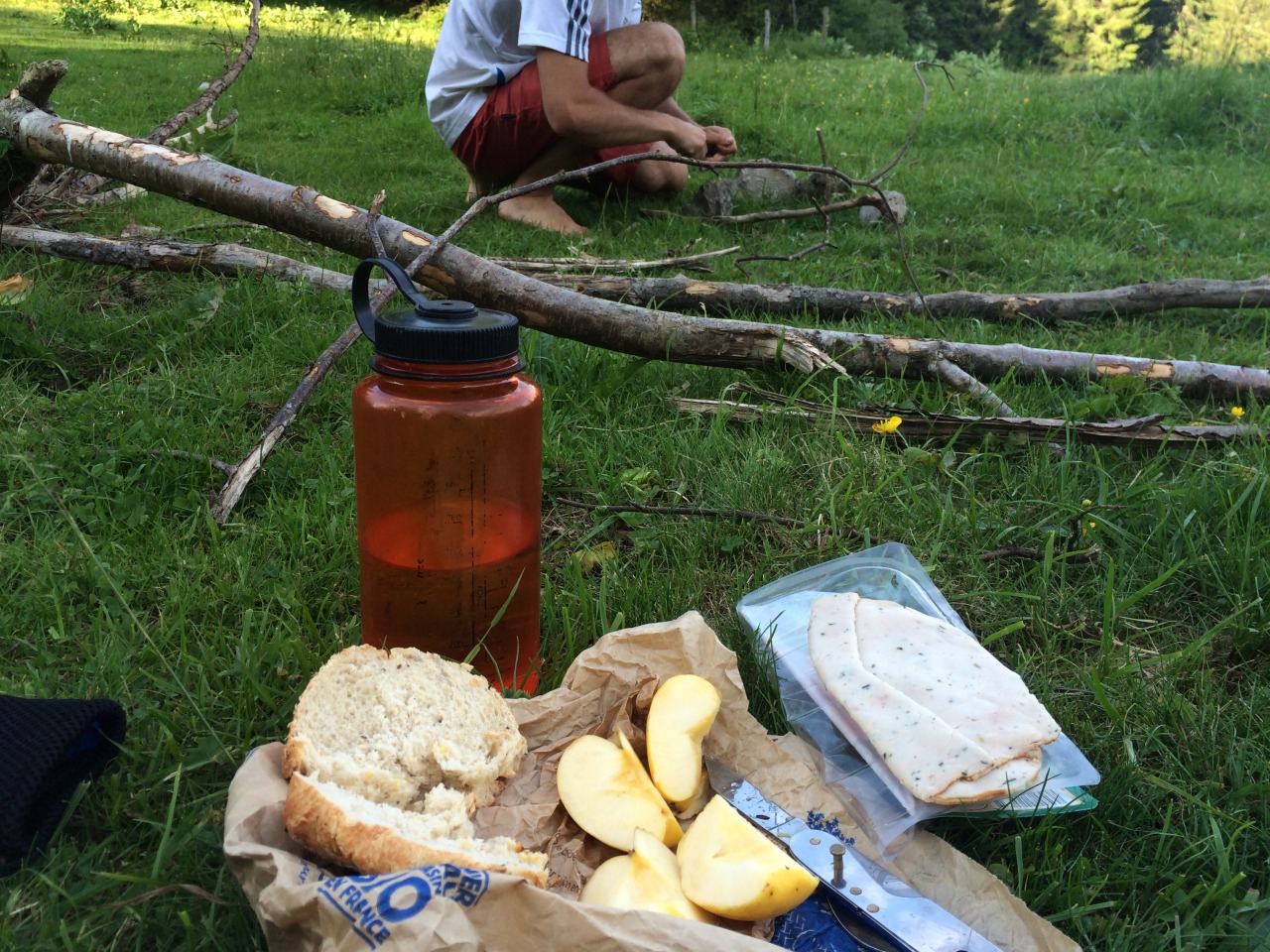 Manuel set up a hammock, I made a simple dinner for myself, and Hugo went to collect wood for a fire. In the States I wouldn’t normally make a fire outside of a designated spot, but this was France, and Hugo is French, so I figured it was fine. He used a small rope to drag out some wood and soon had a good campfire going; I was impressed! It seemed like he had lit just a single twig before the whole thing was going. 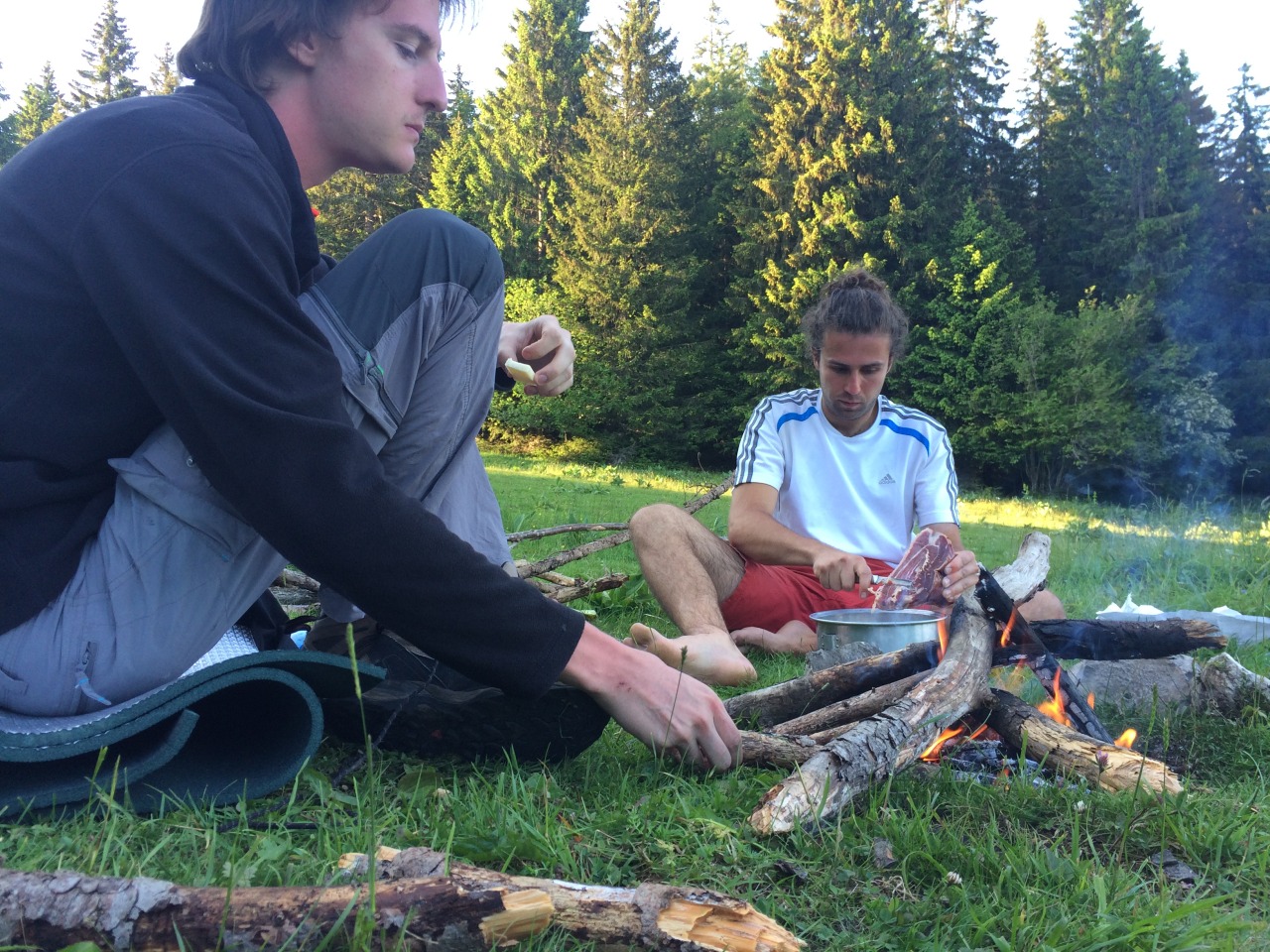 Though we’d heard there would be rain, the sky was clear for the most part and we sat around the fire. They made some ramen in a big pot and shared some pieces of a big cut of smoked ham. Some clouds did roll in eventually, passing around us at first so that we stayed out a bit longer. Finally it did start to rain more seriously, and we put the fire out and headed for our tents.

It had been a great day: good company, an incredible first view of the Alps, good hiking, and a campfire at sunset to close out the night.