Started the day with the best breakfast France has given me: the regular French petit déjeuner of bread and jam, but the jams were all homemade, fresh from the farm. Raspberry, apricot (with shreds of the peel), rhubarb, quince, and pear (the best!). It was hard to stop, they were so good.

The wet weather was still holding on, though more of a misty fog than a rain or storm. It wasn’t the worst of conditions, anyway. Everyone packed up and set off, myself and the mountain bikers leaving last. With the rain ponchos hanging over our backpacks, all of us hikers looked like a bunch of Quasimodos, marching along solemnly in the wet grass and mud. 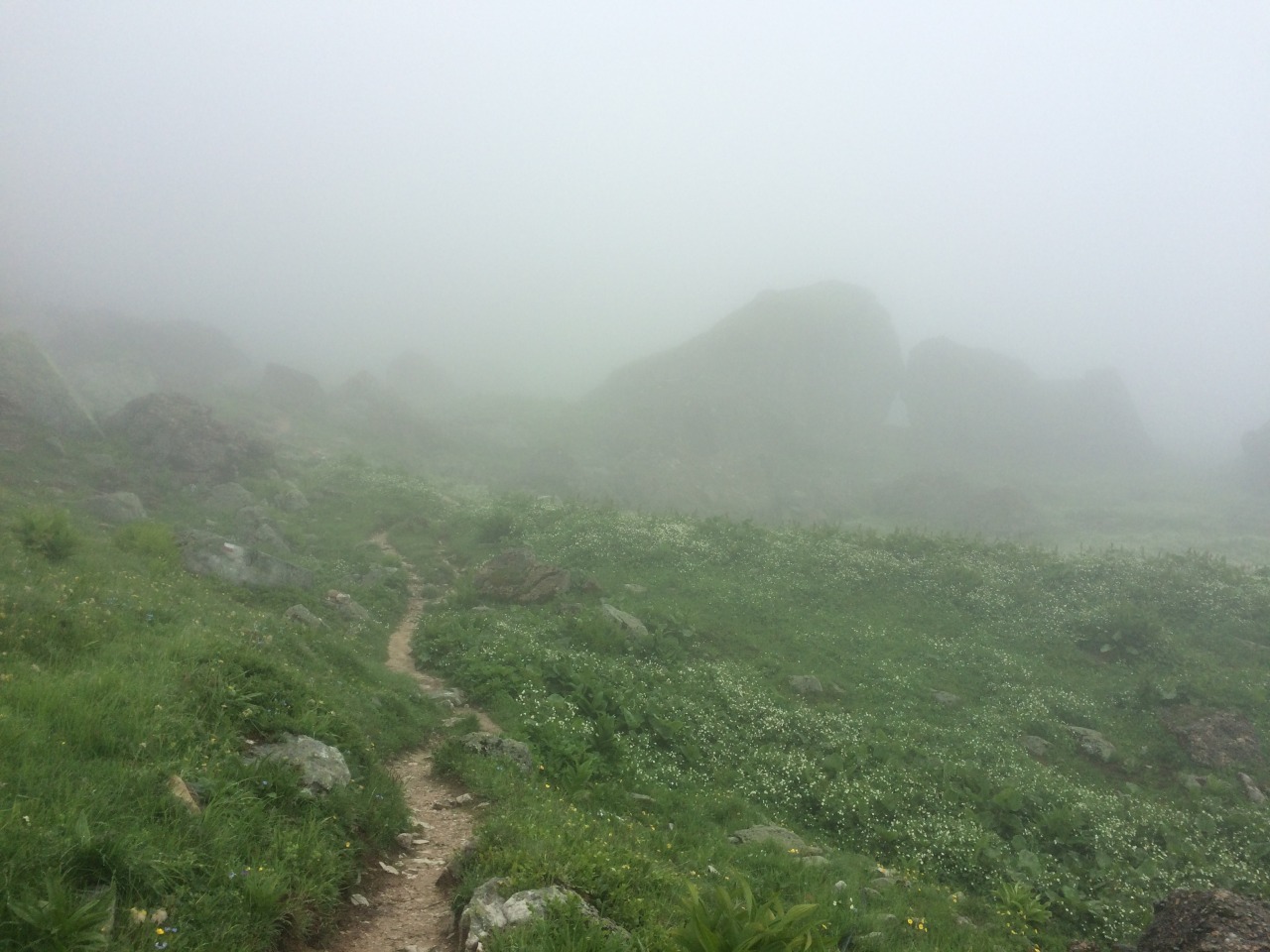 I left the refuge on my own but soon caught up with the various groups, walking a bit with the older women from dinner and then for a longer while with a Dutch family who is also met at dinner. Of course, my best friend on the trail was a soaking wet collie that walked along with me a for a little ways. 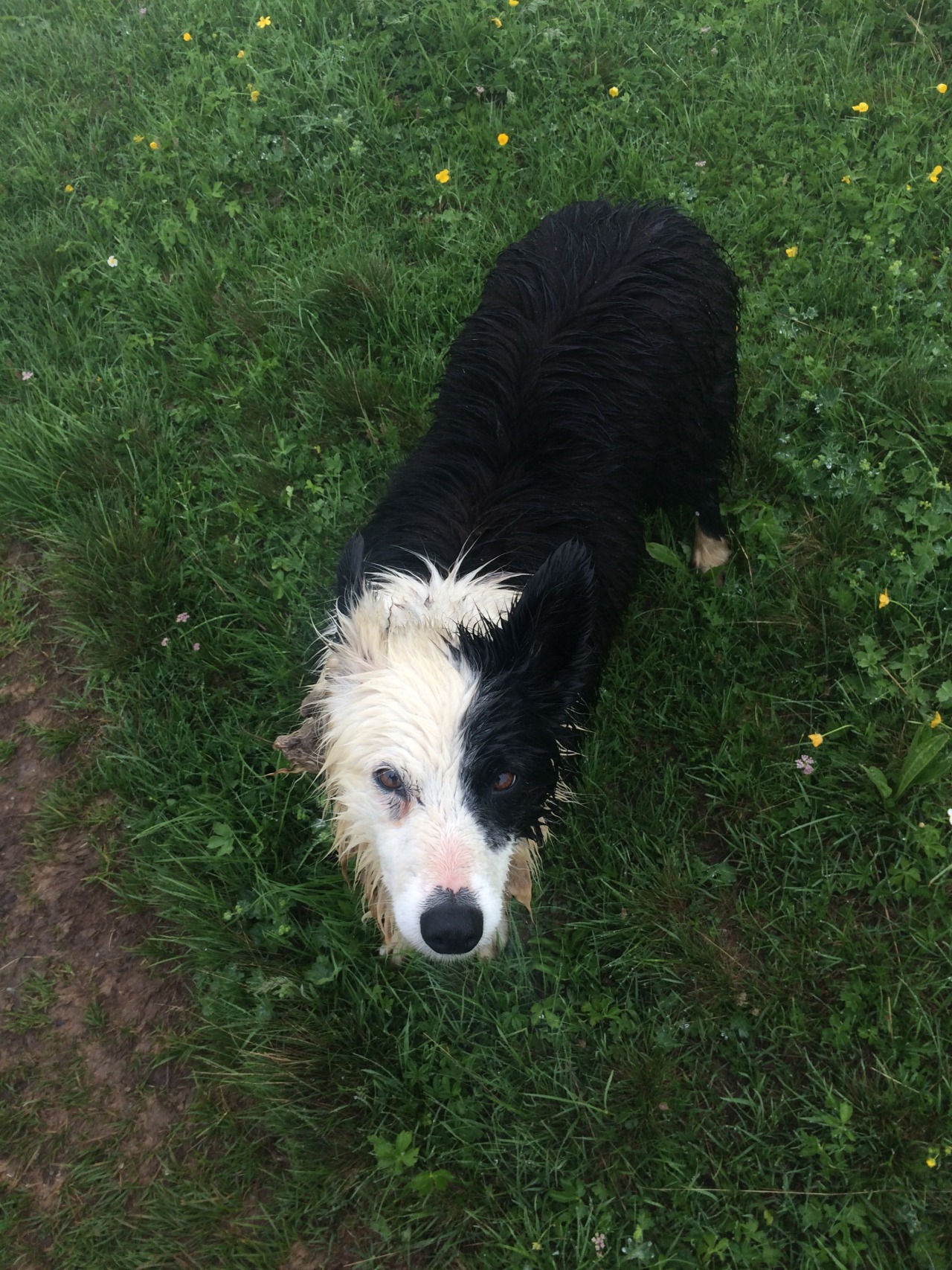 While walking with the Dutch family we missed a turn, hiking downhill on a road for a little too long. So the way up was a bit longer than it should’ve been, a steep climb over conglomerate rock beside a waterfall. They stopped for a rest and I kept on, knowing that the col was still more than an hour’s climb.

Along the way I caught up with David, the French hiker I’d met back at the Refuge du Chésery. We made our way slowly up to the Col du Bresson, the temperature dropping as we gained altitude. It was quite cold by the time we reached the top, and the wind was suddenly strong across the pass. I’d wanted to stop for lunch at the col but it was too cold to stay and you couldn’t see anything, so we both walked on, starting the descent. After hiking down a bit the mist lifted at last, so that finally we had something of a view. 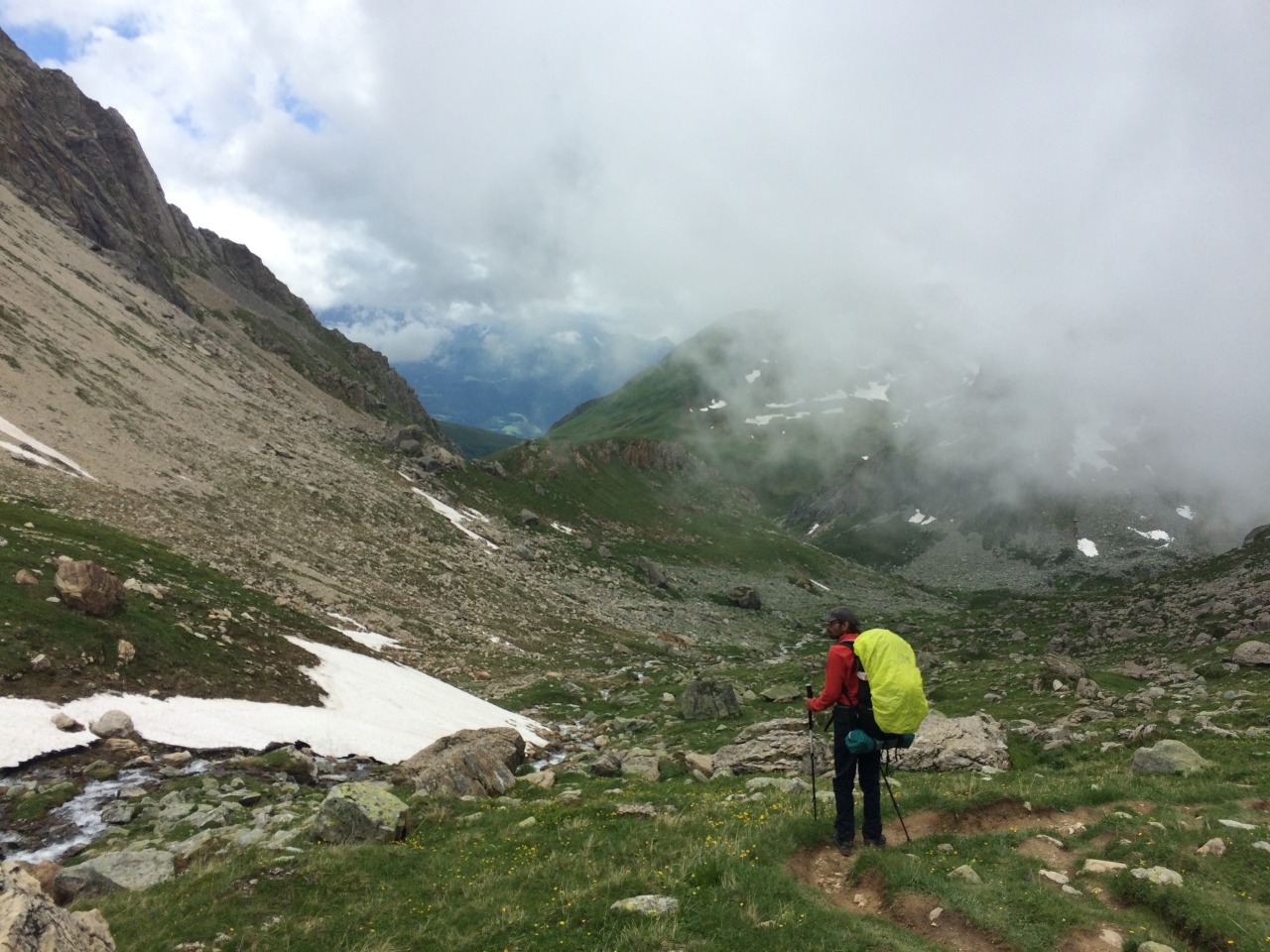 We made the descent in partial sun, clouds passing over at times and the mist still hanging around in the mountains. David stopped for a smoke break, and I continued on my own, now planning to have lunch at Refuge de la Balme, about an hour ahead. The trail was beautiful, passing through a valley, beside and then over a river. The sun was brief, and the weather turned for the worse: starting with rain and wind, then progressing to sleet and even some snow. My hands were frozen, and I walked sideways to avoid facing into the wind—at least it wasn’t blowing in my face.

The refuge seemed forever away. When I finally arrived, thinking I’d have a nice coffee and some warm food, the man working the place advised me that the weather was only going to get worse: if I wasn’t planning to stay the night, better to get to lower altitudes. So instead of lunch I had a cereal bar, then warmed my hands for just a minute above the radiator and walked back out into the weather (which fortunately had improved a bit, now just a light rain).

The trail continued for a long, long descent into a large valley, and finally the sun came through in force. To the side of the valley was a winding, shallow, fast moving river in a rocky bed, reminding me of the Snake River that I saw on my other hike in Wyoming. The trail leveled off and left the valley, following a forest track and old trail through small towns, views across and down valley to other towns. Along the way I met a group of English hikers and walked with them through Valezan and past Bellentre, finally stopping for the night at an open shelter beside the river.

Even here in the valley the temperature was still quite cold, and I bundled up and made myself some pasta mixed with an onion soup. It was pretty good, I thought, especially since I hadn’t had anything for lunch. 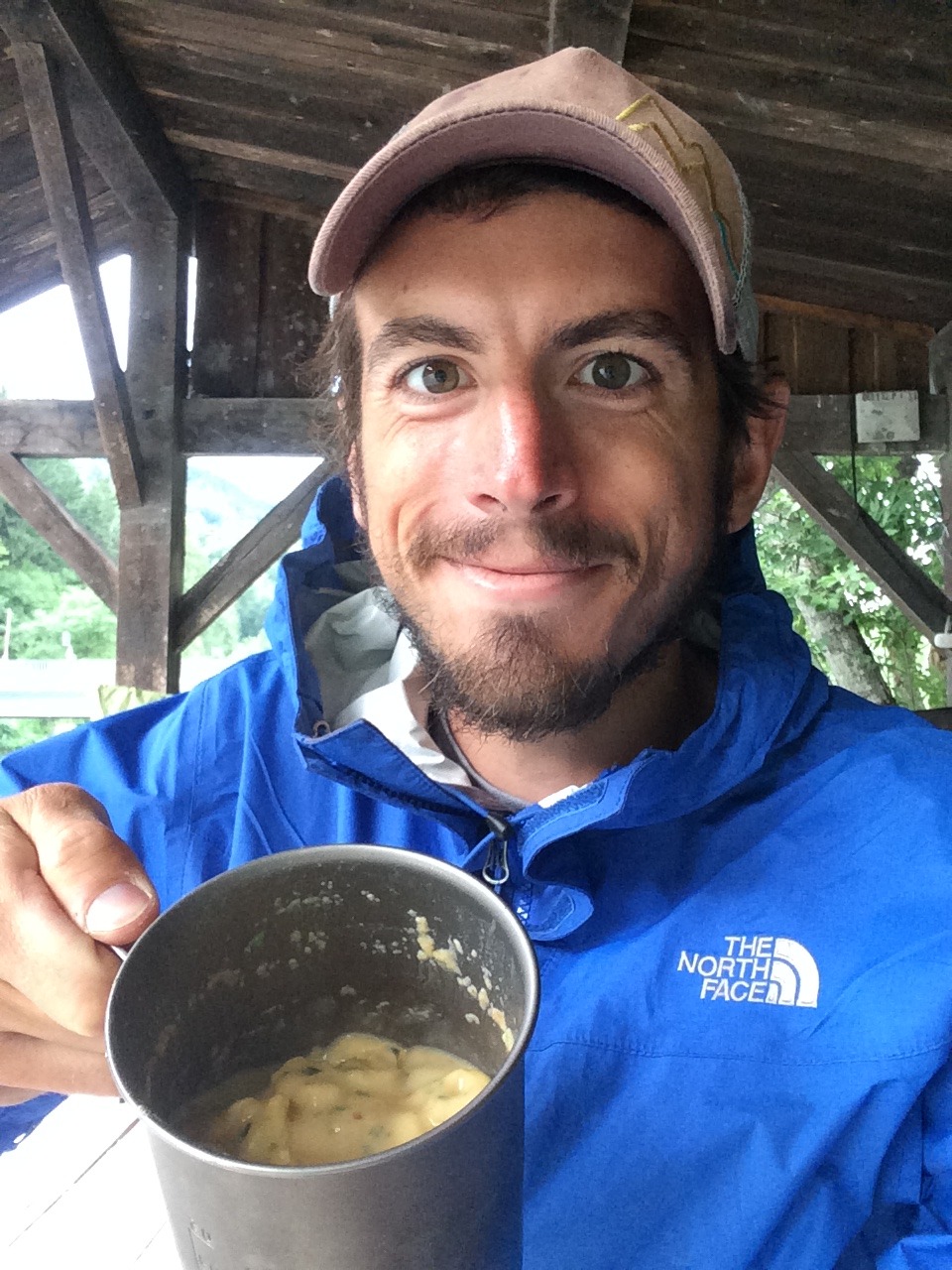 This was a long day, some 30km (19mi); the climb to Col du Bresson was harder than I expected and the weather hadn’t made things any easier. But I was happy to have a roof overhead (it was raining again), I was able to make a short phone call home, and I was enjoying the trek more than ever.