I woke up relatively early because my campsite was in plain sight. In France wild camping (“camping au sauvage” or “bivouac”) is legal on pubic land, except in certain national parks and only in a small tent for one night from 19:00 to 07:00. I was packed up by 08:00, and, having nothing left to eat for breakfast, made my way down into town.

I easily found the market and bought some basics to resupply: a baguette, some slices of chicken, an apple, a box of muesli, some cereal bars (like Nature Valley), and a quick-cooking Uncle Ben’s rice mix. They only sold the full baguettes, so the baguette stretched out of my pack comically.

As always, the most important thing when backpacking is weight. For food, I try to have enough for two to three days, but not more than 2-2.5kg (4-5lbs). The best way to do it is to go into the store around lunchtime so that you can buy some heavier items and eat them straightaway. In any case, meals on the trail are simple: pasta, soup, granola, sandwiches, snack bars, etc. Best to enjoy good food in cafes and restaurants, where you don’t have to carry all the ingredients.

After the market I had a small sandwich as lunch and returned to the trail. It was a hot day, and there was some more mud, though not as bad as the day in Brognard. This was the final part of the first section, from Thann to Soulce-Cernay, some 120km. Between St. Hippolyte and Soulce-Cernay I crossed a waterfall/river, and took the opportunity to have a quick wash in the water. My clothes were still a bit damp from the day before so I set them up on a line to dry. Wearing more shorts as a bathing suit, I laid down in the river. The water was freezing cold but it was refreshing on such a hot day.

A little ways on I passed a GR5 mile marker that seemed to be just about the halfway point of the full trail. About 1100km to Hoek von Holland, and some 1040km to Nice. Plenty of walking left!

Past Soulce-Cernay I took a rest at some farmhouses since the afternoon sun was so hot. Some climbs, some descents, lots of sun. Outside Courtefontaine I talked for a few minutes with a man who said he maintained the trails in the area. He was happy to see me walking I think.

A little ways on I was walking through fields again, but not so bad as the day before. This was much more peaceful: http://youtu.be/q8smZfj7eUw

I stopped again in the evening after a long climb, at an empty guesthouse (gîte). There was a wagon wheel with names carved in of people who managed the house, one group had signed in 1974. I was laying back and giving my feet a break when a car pulled up: a couple and their two girls were staying in the house for the weekend. They were hikers themselves, and we talked about the route through the Alps. Guillaume, the man, looked like my dad back in the day. We shared a large bottle of beer, then I went on to finish the climb.

By the time I walked through the town of Fessevillers, farmers were finishing plowing their fields and were corralling the cows for the night. I got stuck in the traffic for a bit. 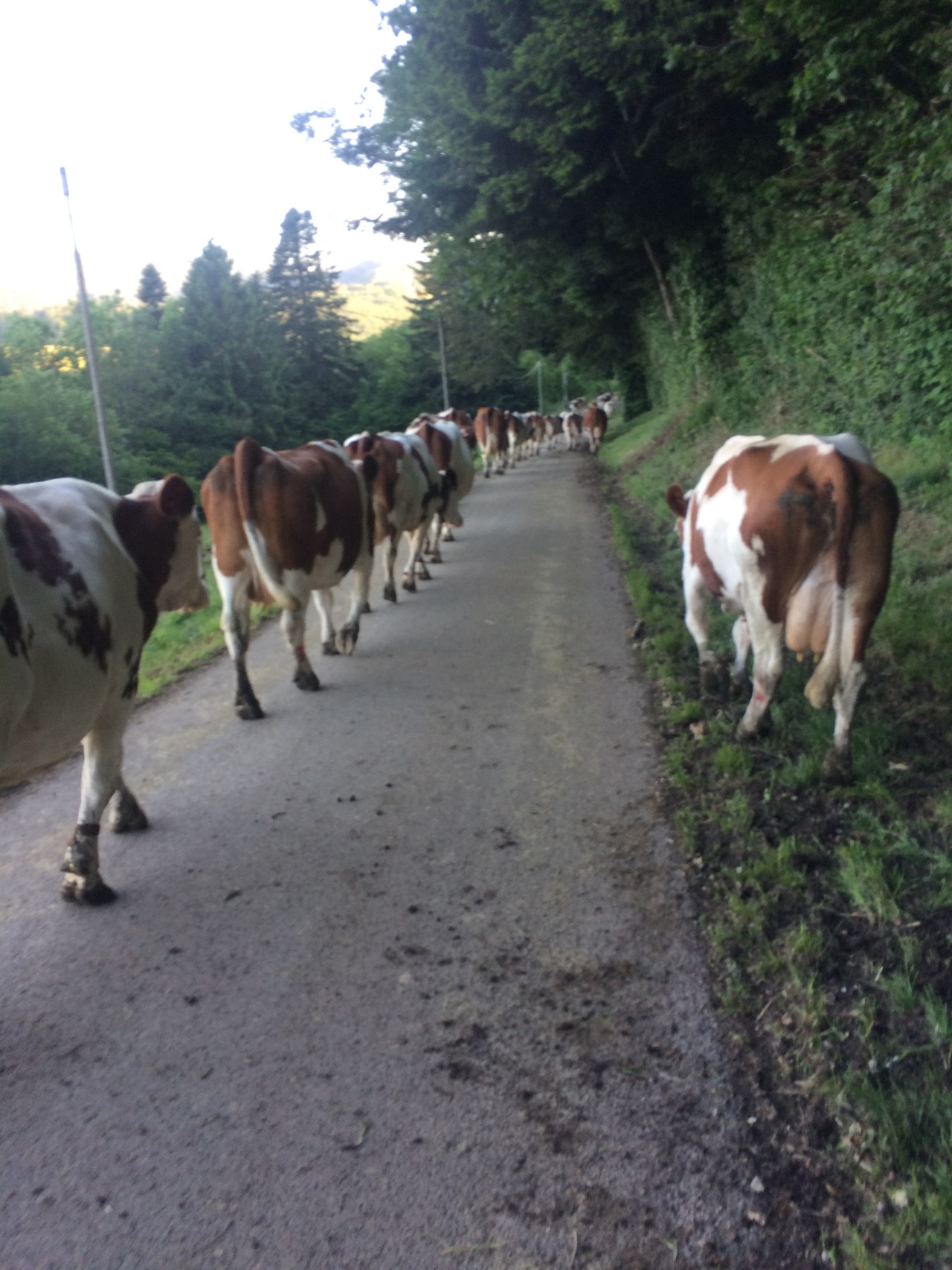 The last hour or so was very nice walking in the setting sun on paved forest roads. I made one last climb, and found a small spot in the woods to set up camp for the evening. Walking in the sun and heat all day was exhausting, and I slept like a rock. 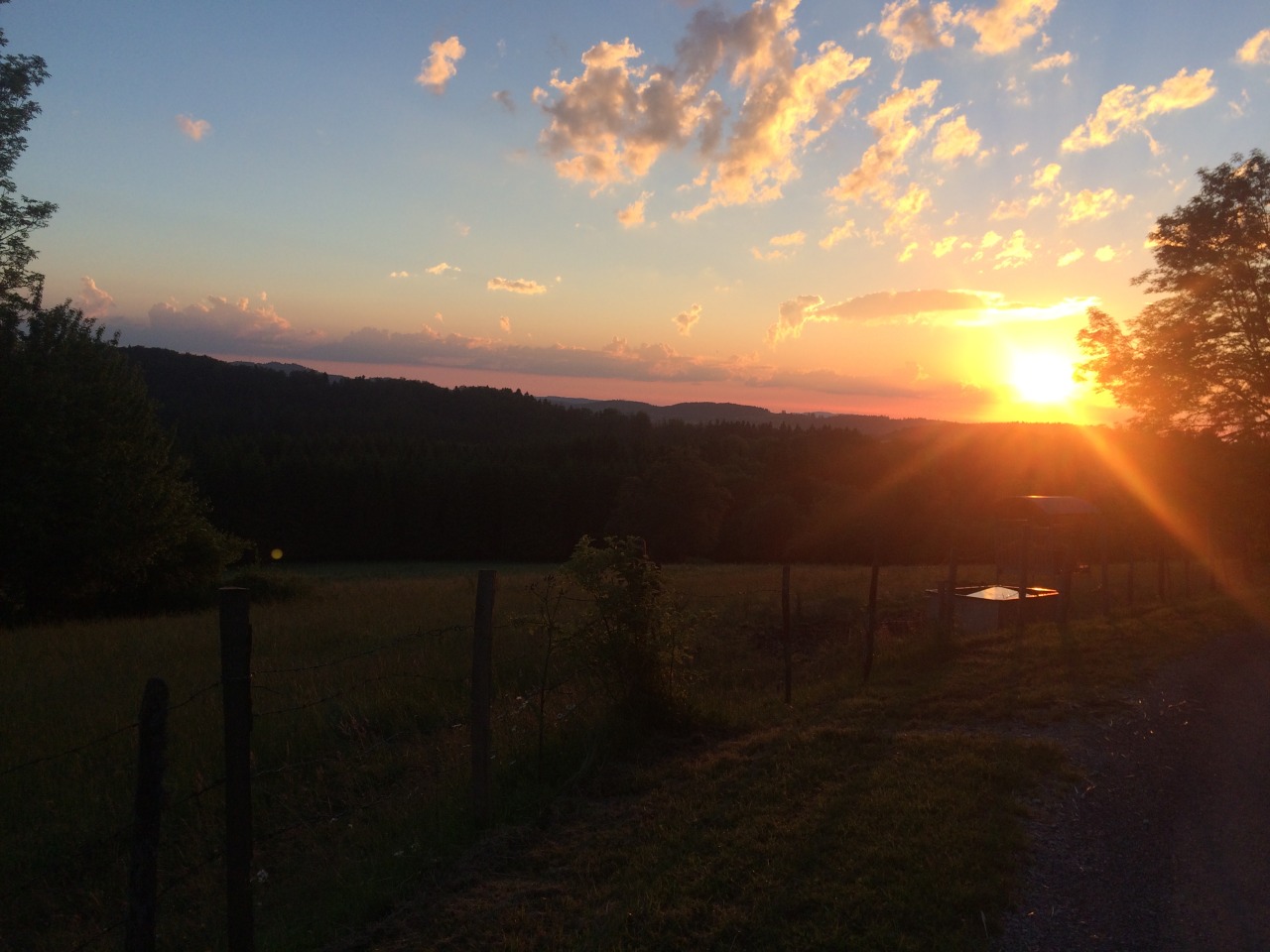