Not the best trails today, to say the least. On top of that it was hot and humid, making for miserable walking.

I started the day by checking my clothesline, which I’d set up the night before. Unfortunately they hadn’t dried much at all overnight and I could still wring water out of them. Apparently sun is more important than wind when it comes to drying clothes on a line. It was humid and there was a mist coming off the waterway, so the air probably couldn’t take any more moisture anyway. The Source de la Doubs is at the base of a mountain and it took awhile for the sun to come over the top. I moved my clothesline into a spot where it’d get more sun and spent the morning watching the light spread across a field. No complaints here.

When I started walking it was already hot because of my late departure. The trail climbed up away from the river and for awhile I was fighting the mud again. At a certain point the mud stopped, but the trail wasn’t any better for it: instead of being muddy the trail was now totally overgrown with weeds and tall grass. I was wearing shorts because of the heat, and my legs were quickly covered in bits of grass and dirt. 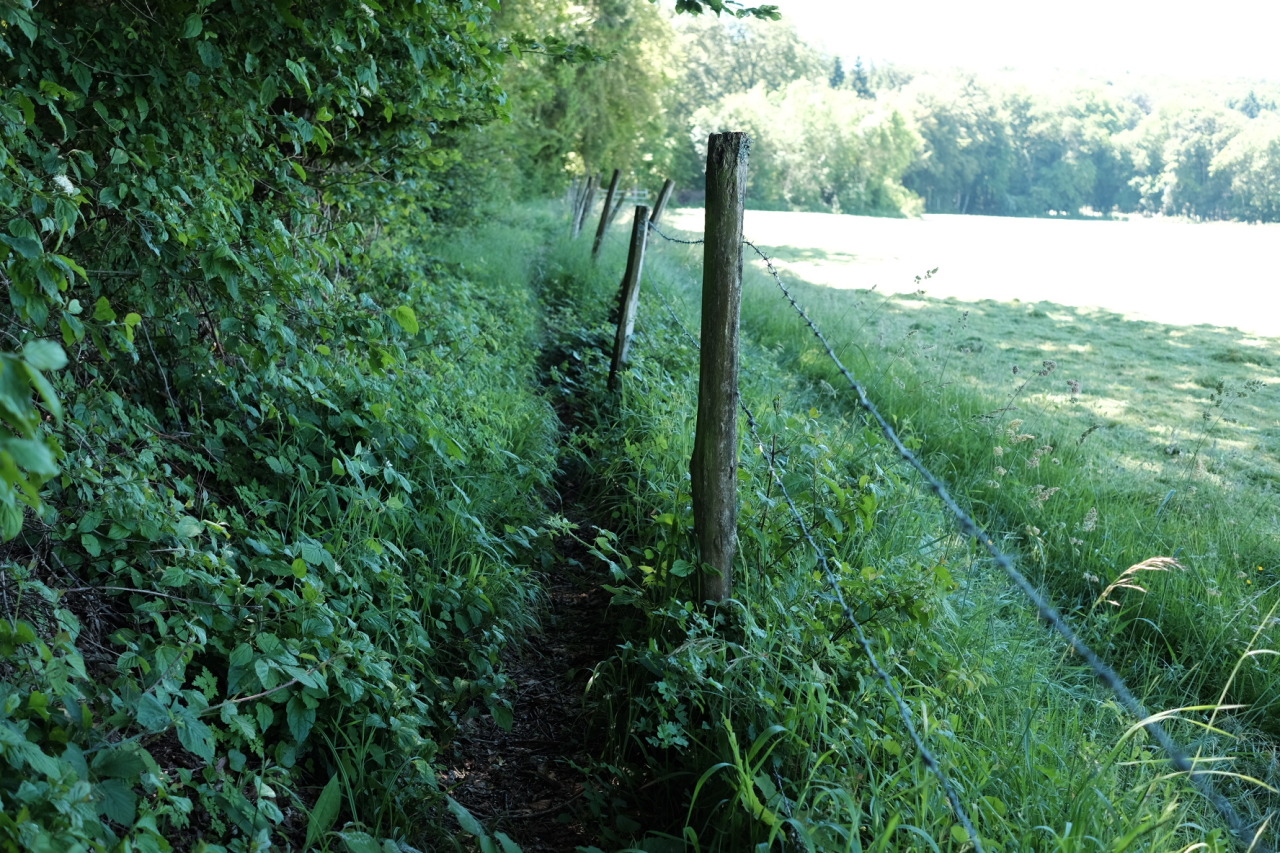 Worse, the trail narrowed so much I could barely fit. On the left were thick, thorny weeds and stinging nettles. On the right was barbed wire farm fences. Between them—or just as well, within them, if you’ll allow that preposition here—was the trail. The way was following the border between France and Switzerland, and I suppose was squeezed onto the actual border itself in order to avoid crossing private property. At one point, noticing that Switzerland had a nicely packed gravel road on its side, I defected France and enjoyed the niceties of a proper trail. It ended rather suddenly, and I had to manage my way back through some pine trees to find the GR5 again.

Emerging from the forest, the trail was still miserable, passing over hoof-rutted cow pasture and into open fields of tall grass. On a nice day it would’ve been poor. This was not a nice day for hiking.

There was one piece of history that the trail offered: every so often I’d pass a way marker, a small concrete block, shaped like a thick headstone, that established the border between France and Switzerland. One of the markers had a plaque that mentioned something along the lines of it being the agreed upon frontier between the nations after the rule of Napoleon.

I reached a town, Villars-lès-Blamont, where I hoped to find a cafe for lunch. Not to be: these were tiny towns, and this one had only one convenience store that wasn’t open. I should mention here that stores in France have very odd hours by American standards, and the signs posting their hours of operation often sprawl at length.

I sat at a park bench in what little shade I could find and ate a bowl of cold oatmeal. Not every meal can be four courses of great French cooking. I didn’t have much food left, having found few stores and none open. Across the way children were playing in the town’s fountain.

I waited out the heat of the day, much as I’d waited out the rain a few days ago. In the late afternoon I packed up again, stopping to ask the kids which way the trail went. I already knew where, but it’s fun to talk to people anyway, especially with kids in a foreign language. They seemed to find me hilarious. Probably the running shorts and hiking socks. 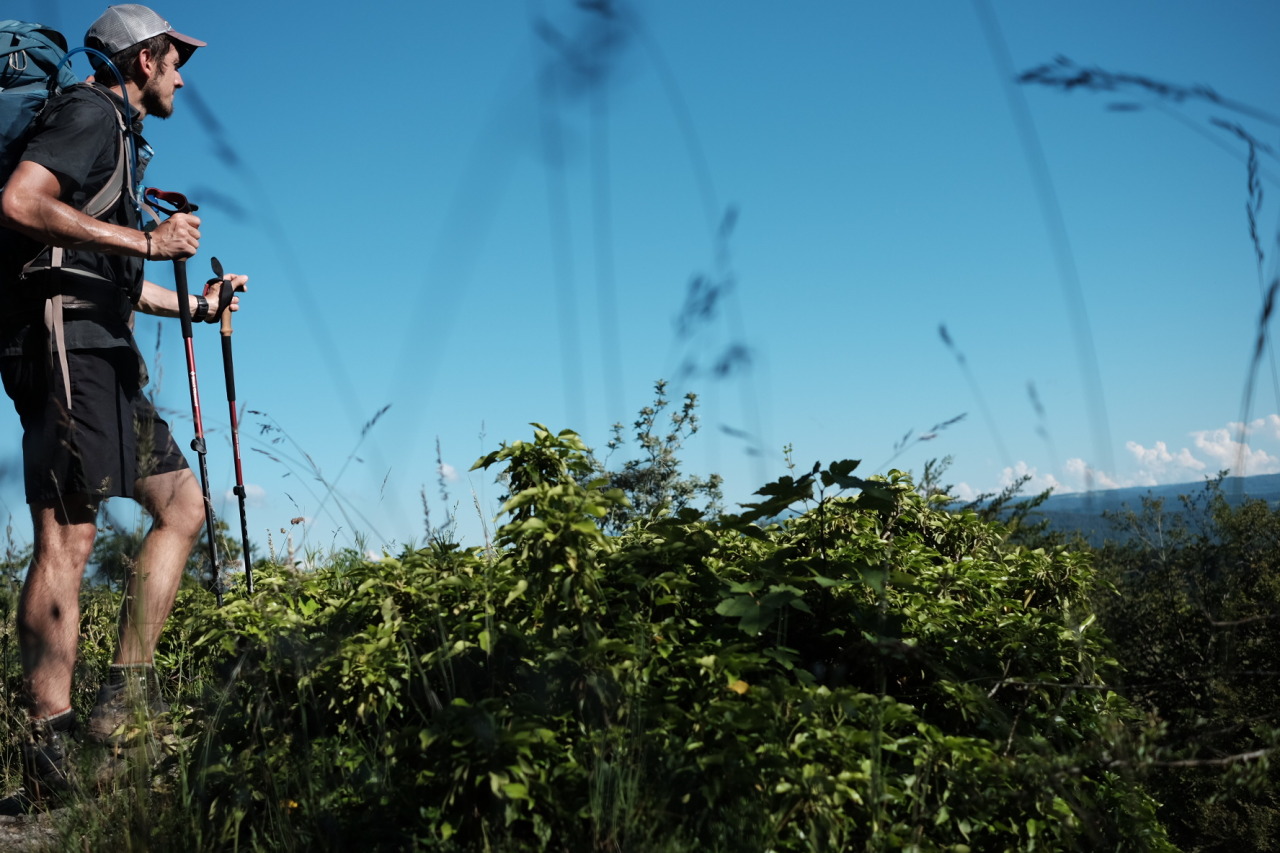 It was another climb, then paved roads brought me into Chamesol. It was so hot that in dropped my pack and dunked my head in the fountain. I could only wall for an hour at a time before having to stop and cool off.

Pressing on a bit further, I finally stopped about 20:15 by a church outside the town of Saint Hippolyte. There was a faucet for water and I filled up. The church had a great view down to the town below, of the (now much larger) Doubs river and surrounding mountains. A man and wife came by for the view and we talked briefly about my trip. After they left I ate the last of my food, a “Kathmandu curry” meal-ready-to-eat, and watched another sunset. It had been a long day, and I had no problem falling asleep.