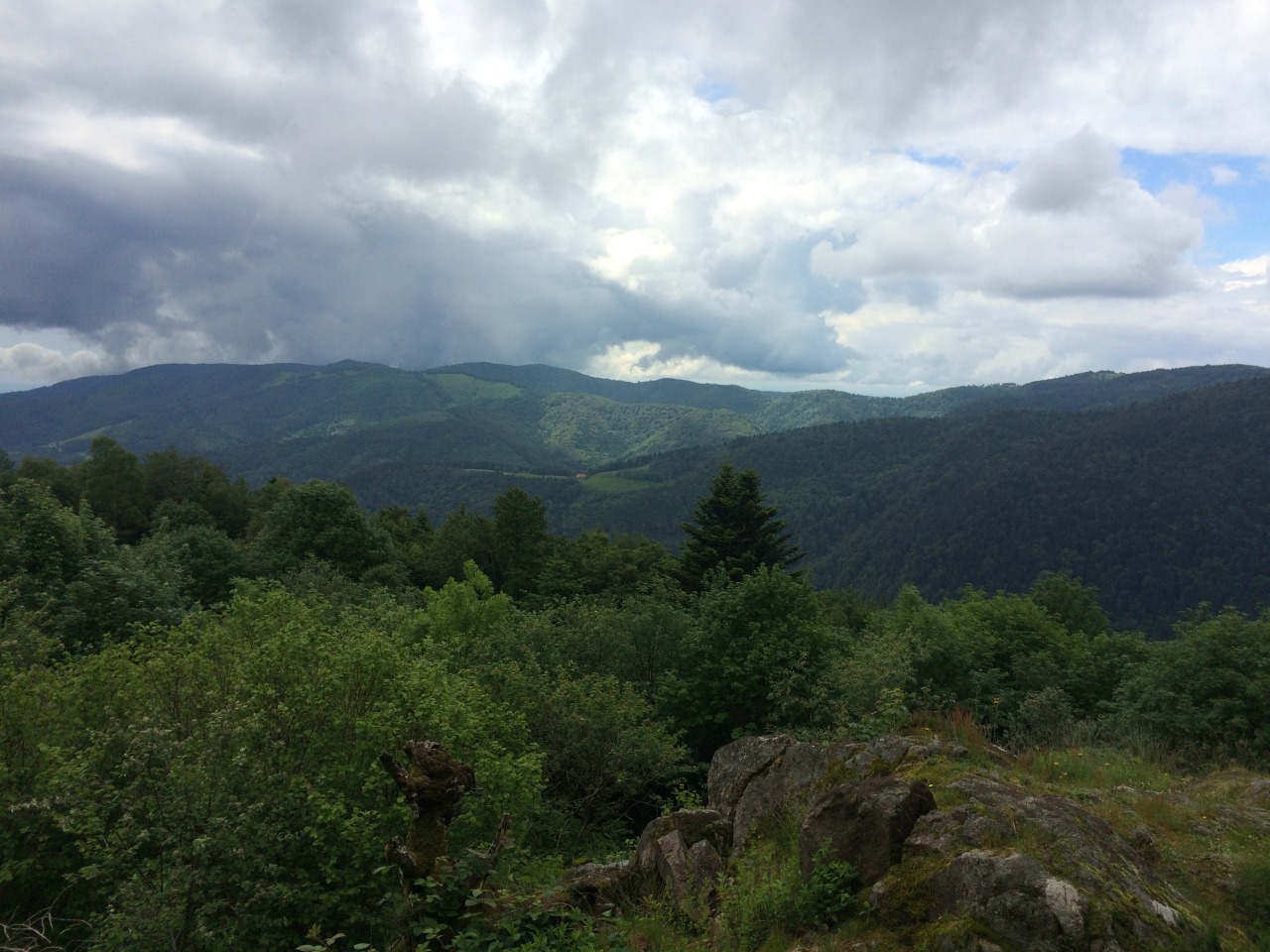 Woke up this morning feeling strong and well rested thanks to the previous night’s dinner and accommodation. I was invited to breakfast as well, and enjoyed a coffee with a small plate of yogurt, granola, strawberries and pound cake.

Folks from the group came down on their own time and seated themselves along the table. Joseph sat down across from me, and—after taking a sip of coffee—let me know that they had taken care of my lodging. And that the manager didn’t expect anything for dinner either. I still can’t believe I met such kind and generous people.

After breakfast everyone went to pack their things, and before setting off we took a photo of the whole group. From left: Joseph, Jaques, myself, Catherine, Hollande, Léon, Heléne, Brigitte, Simone, Evelyne, and Jean-Phillipe. 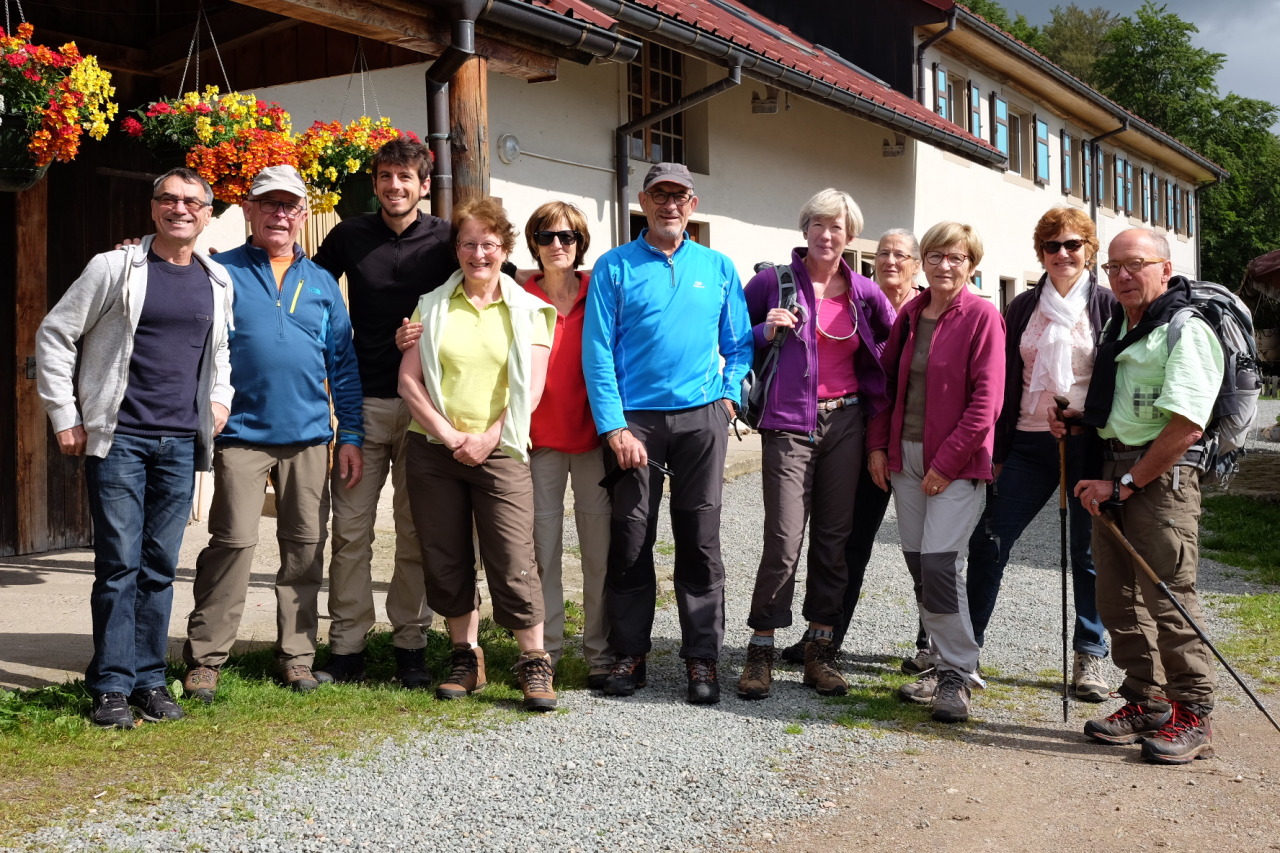 They were taking a different route than I, so we said our goodbyes and then I refilled my water and went off on my own.

I picked up the GR5 again, headed toward the Ballon d’Alsace, one of the higher peaks in the Vosges at 1247m (4091ft). There was a light rain, but it was good walking on forest trails. The way crossed beside large boulders and over throws of granite, often with a small waterfall running down the path. It opened up to a great view of the other mountains in the forest.

The forest itself was thoroughly wet, and trees were wrapped up on all sides in bright green moss. The path was covered in warm colored leaves. The weekend’s rain was trapped in the branches and hung as a white mist. It was a great section of the trail. 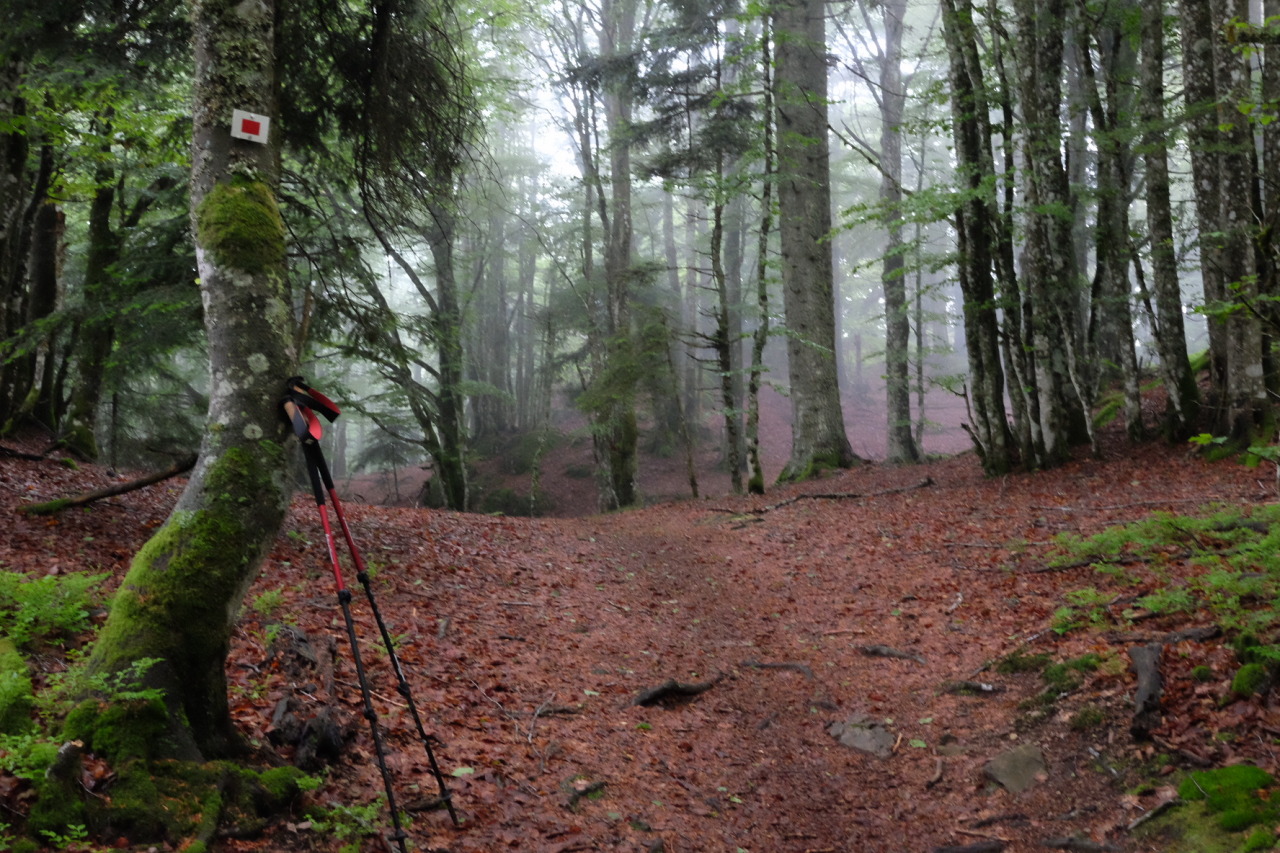 The climb up the Ballon was difficult: steep, wet, and rocky. At the top, the clouds shrouded everything and hung in a thick smoke that wood briefly clear then fill in again. Even though I was sweating and hot from the hike up, after stopping for a few minutes it was pretty cold. I didn’t stay up long and the descent was easy. 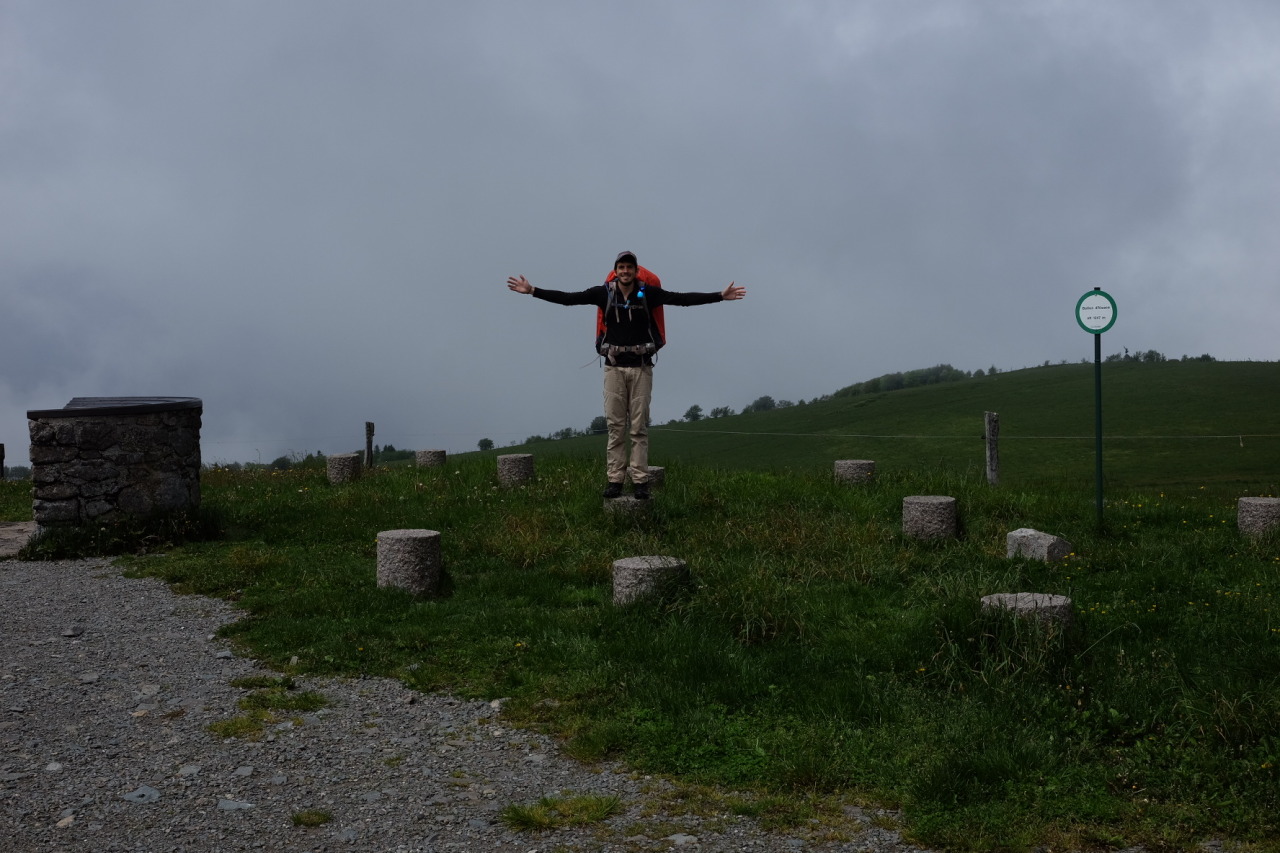 Right about lunchtime I ran into the group again; they were just finishing but called me over to sit with them and gave me a few things they had left over. Of their repeated generosity, Léon said simply: “le solidarité des montagnes.”

After lunch was more fine forest walking. The GR5 trended downhill over established trails connected by heavy equipment tracks, so the paths were wide and well built.I was walking alone, and didn’t even see anyone else except one or two people in passing, but now I was enjoying the hiking and nature and didn’t mind being on my own.

After an hour or so I came to a crossroads and the GR5 turned off from the route marked in my map. This can happen: the route changes somewhat often, and maps go out of date. It’s best to follow the trailblazes, and that’s what I did.

Good roads brought me to the Col des 7 Chemins, a pass and shelter where I set up camp for the night. Rather than set up my full tent, I just got out my sleeping pad and bag and laid them on the wooden bench. Hung my clothes up to let them air out, ate the leftovers from lunch as my dinner, and called it an early night. 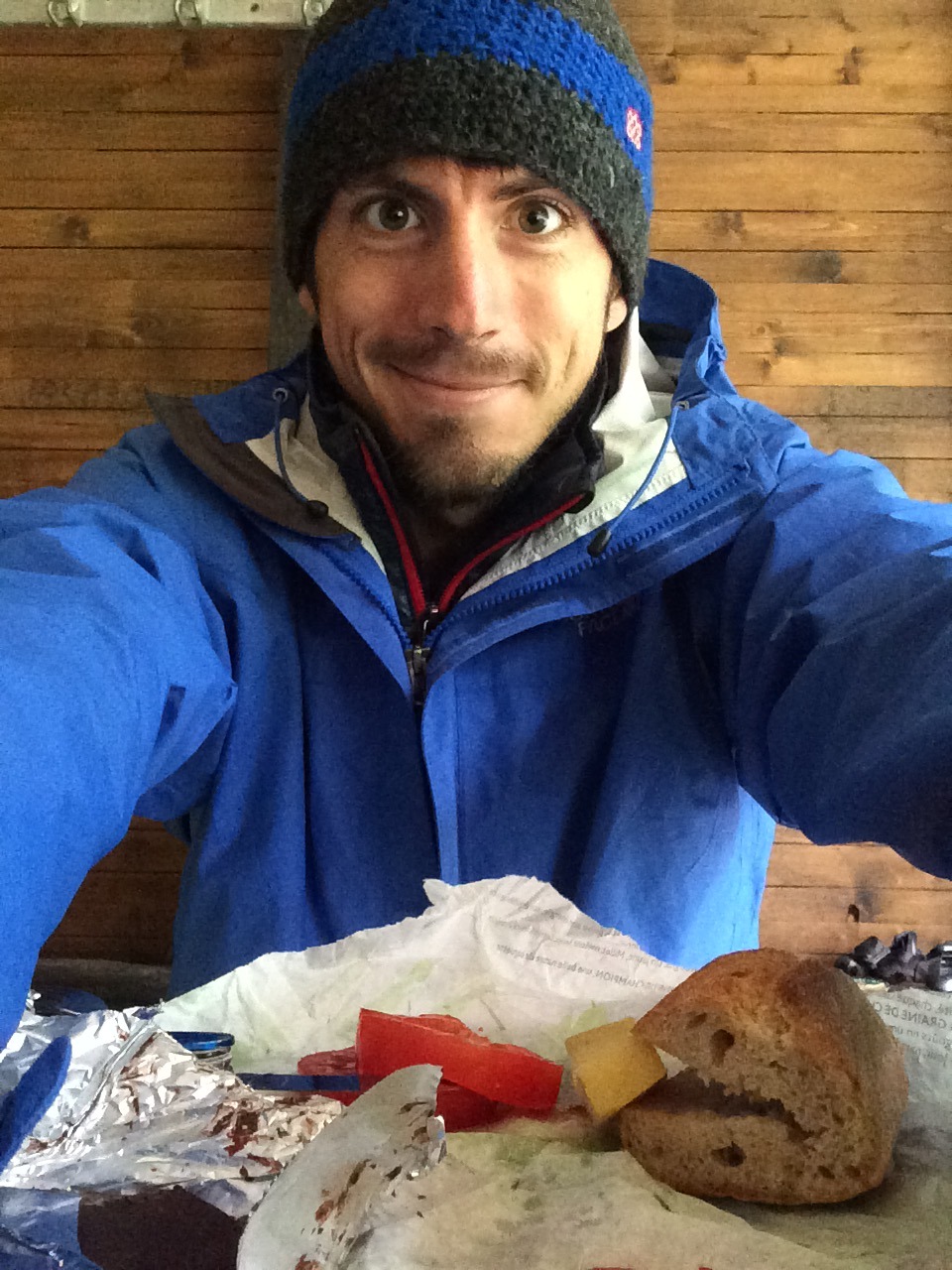 It’s a good life, on the trail.