In the morning, after breakfast, Joseph drove me down to Brognard, a small town just outside the larger city of Montbéliard. Another short trip by car that saved me a days walk or more. We easily found a marking for the trail and I put on my pack. He wished me good weather and good travels, and then I was back on the GR5. Hope to see those folks again someday. Merci beaucoup!

The trail followed a canal, and reminded me of my bike tour several years ago. I can’t be sure (Sam has the route), but we might’ve even ridden over the same path. I know we were in the area at least, having spent a few days with friends of Sam outside of Basel. The walkway was paved and flat, perfect for biking but not as nice for walking.

Leaving the canal, I entered more woods, usually a great place to walk. Here though, in a lower region between mountain ranges, the path was a trough of mud. I don’t mind if I never see that section again. It went on for two hours, getting worse before it got better, and then worse still. A symphony of squishes, with multiple encores. I never expected to test my shoes so thoroughly, and fortunately they held up as champions.

By my count, there are three types of mud:

Black mud is wet and sloppy and squishes underfoot. It’s made from crushed leaves, dirt, sticks and the rest. It’s often deep, rutted through by mountain bike or ATV tracks, and smells like mud. It makes for slow walking and pulls at your boots, but is otherwise harmless.

Grey mud is thicker, harder, more viscous, and more of a nuisance. It sticks to the bottoms of your shoes and ruins their traction. On slopes, it’s cause for slips and falls. On level ground it will still make you slide somehow. It tends to hold pools of water, and seems to be made of crushed rock or clay.

Then there’s green mud. Green mud is as much water and plant as mud. It’s usually found on the sides of the trail in tall grass, under a few centimeters of water. This is the kind of mud that frogs love. It always has standing water, often with grass or algae growing. It’s swampy, wet, and a slog to walk through. You won’t slip, but your pant legs and shoes will be soaked.

Finally out of the swamp, I had lunch at a picnic table and then napped in a hammock outside Dasle. Walking again, I stopped to pet a dog that had been sleeping by a fence. Dogs have been barking when they see me coming, but this one was friendly.

I’ve not seen much by way of wildlife, just one deer and lots of snails and slugs. Some birds, but they fly away so fast you only catch a glimpse. I have a picture of an absolutely perfect snail, but the signal isn’t strong enough to upload photos. So just imagine: speckled brown spiral shell, sticky green body with funny antennae, sliming across stones on the path in a pine forest. Beyond that section I passed a natural arch of formed from calcium rock, called Pont Saladin, and with several legends about its history.

The day had been hot, but the evening was perfect. I passed through a few small towns, Vandoncourt and Abbévillers, enjoying simple walking past rolling hills and open farmlands. It was paved country roads, a welcome change from the muddy start of the day. On such peaceful roads, the mind wanders and one begins to dream of a simple life in the French countryside. I imagined myself as a merchant from centuries ago, strolling out of the woods that connected towns and following wherever the road led. There is no better way to know a place than to walk through it.

Another hour walk took me down a hillside to a stream, and then down its banks. I came to a turn in the trail and decided to explore the other way for a campsite. What I found was more than I ever could’ve hoped for: a beautiful old waterwheel and storehouse with a covered arcade to place my tent under. I was at the Source du la Doubs, the starting point for the Doubs river which I’ll be following on the trail, and it was perhaps the best wild camp I’ve ever had. 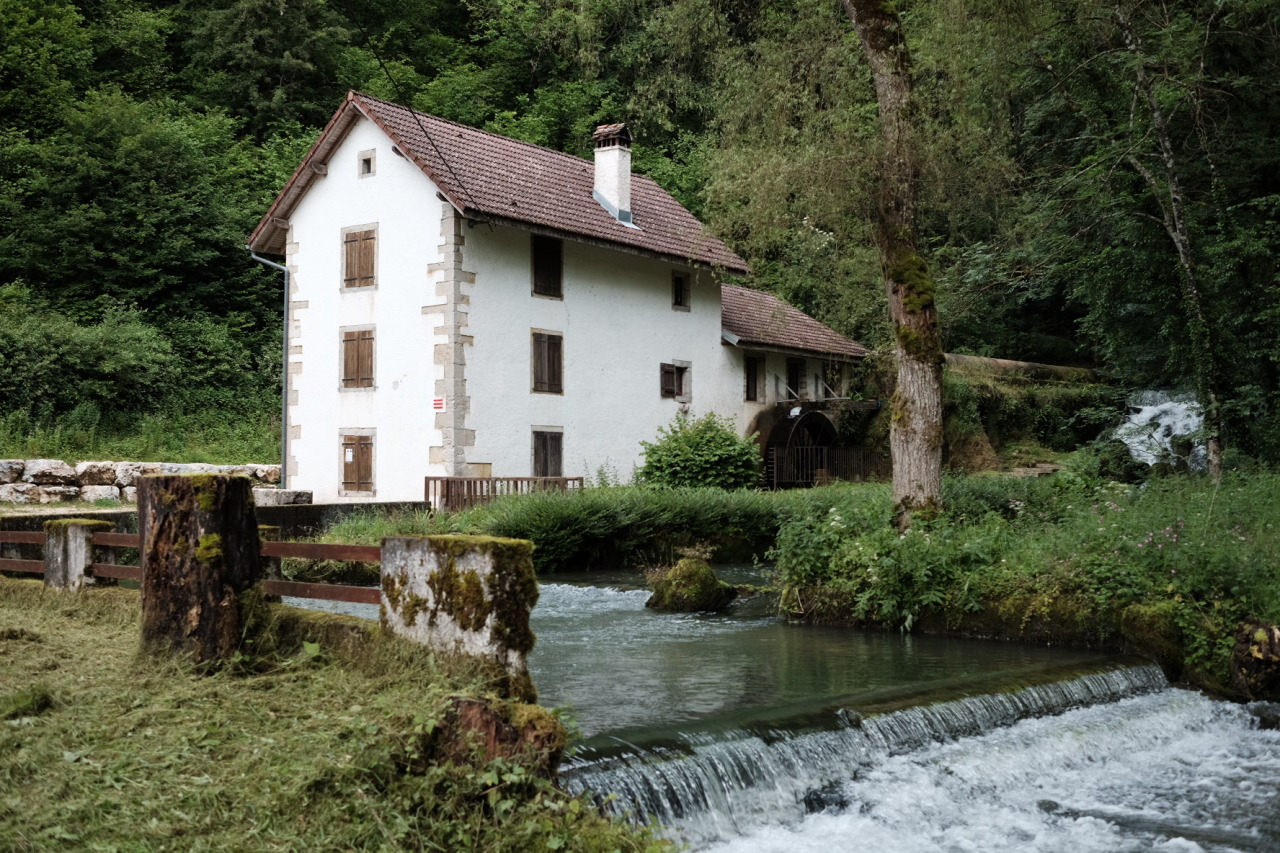 I washed my clothes and face in the cold water, set up my tent under the storehouse’s roof, and enjoyed the evening sunset. 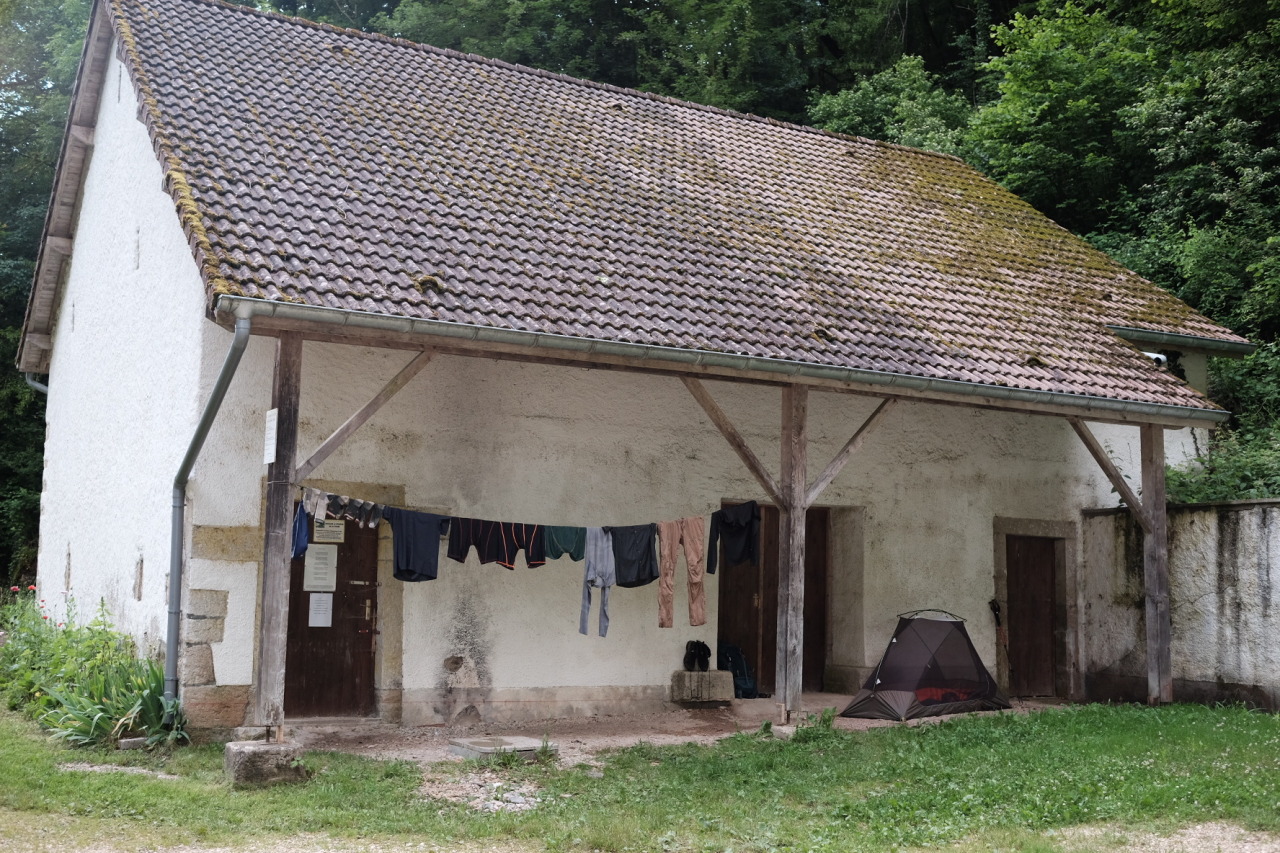